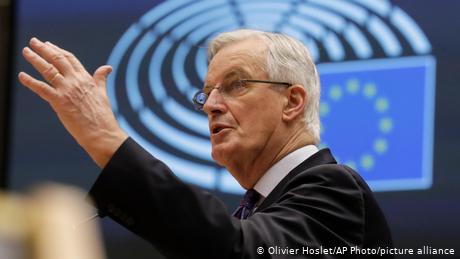 EU chief negotiator Michel Barnier said Tuesday he was making a "final push" to strike a Brexit trade deal with Britain even as diplomats admitted privately that talks could drag on into next year.

The UK will leave the bloc’s single market and customs union on December 31, meaning its current free trade arrangements expire.

Barnier and his British counterpart, David Frost, have been haggling over the future relationship between London and the27-member bloc for nearly nine months.

Progress has been scuppered mainly owing to disagreement over fishing rights and how to prevent unfair competition.

"We are really in a crucial moment. We are giving it a final push," said Barnier as he arrived to update EU ambassadors on the talks.

The Frenchman said the UK's latest offer on sharing out the catch from 2021 was "totally unacceptable," sources told the Reuters news agency.

A source close to the talks present described his closed doors briefing as "Groundhog Day."

The EU has said it is willing to cut the value of its fish catch in British waters by around 25% from 2021.

British government officials say that offer is unacceptable and that they will not sign a deal in which they do not"regain sovereign control" over their waters.

But sources said that was only one piece of the puzzle. The length of the transition on fishing rights beyond December 31, as well as how the EU could retaliate if London cut its vessels out of British waters afterwards, were equally important.

Earlier in the day, EU diplomats and officials said an agreement was getting closer but also warned it might not come together in time to come into force on Jan. 1.

Barnier has admitted privately that he might fail to strike an agreement before the end of the so-called Brexit transition period.

The UK's offer to gradually curb EU fishing access over three years was also deemed too short for the bloc, which wants a longer-term business perspective for its fishing industry. London has said the bloc's proposal of six years is too long.

"Unfortunately, the UK is not moving enough yet to clinch a fair deal on fisheries," one EU diplomat told DW. "The EU will not close its door to the UK and remains ready to negotiate even beyond the 1st of January."