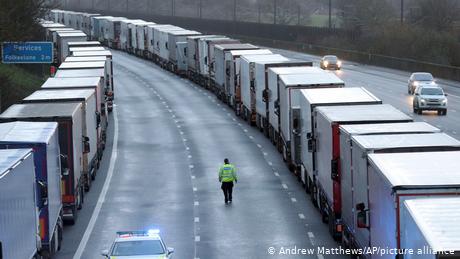 Hundreds of trucks were stuck in massive traffic jams in the port of Dover on England's southern coast on Tuesday, with drivers expressing anger and sadness over the sudden travel ban.

France shut its borders with the United Kingdom on Sunday, imposing a ban on travel by land, sea, rail and air, after a new strain of the coronavirus was discovered in Britain.

The sudden restrictions to prevent the spread of the potentially more infectious strain have snarled one of Europe's most important trade routes.

Stranded on the sides of the motorways leading to Dover, drivers expressed anger and sadness over the sudden travel ban, according to DW correspondent Charlotte Chelsom-Pill.

"They've said they're worried now that they may not be home in time for Christmas," she said.

Home Secretary Priti Patel told BBC radio that some 650 trucks were lined up on the main highway to Dover, while another 873 had been redirected to a nearby airport. The number of trucks still stuck on the highway, however, appeared to be higher.

"We've since heard, and we can verify from having driven along the motorway, that there are more like 900 trucks stuck there," said Chelsom-Pill.

One of the proposals to get traffic moving again is to carry out mass coronavirus tests on the drivers, but that solution would also likely mean delays for drivers, Chelsom-Pill noted.

"The question is how long that will take? How many days will these drivers still be stuck here?"

Over two dozen countries around the world, including many European countries, have also suspended flights from the UK.

Prime Minister Boris Johnson's government has been scrambling to reach an agreement on measures that would allow freight to flow again, with concerns rising in Britain about food shortages on produce like citrus fruits and cabbage.

The British government is currently in talks with France to work out a deal that would allow freight trains to resume operations, with both sides voicing hope that a deal could be reached on Tuesday.

Home Secretary Patel said the government is "speaking constantly" with their French counterparts.

"It's in both our interests, both countries to ensure that we have flow, and of course there are European hauliers right now who want to be going home,'' she told the BBC.

What do we know about the new COVID strain?

Over the weekend, Johnson announced a new strain of the coronavirus had been discovered in England and that the mutation appeared to be more transmissible.

British health experts have said the new strain is 70% more transmissible, although other virologists have urged people not to panic and said they are still reviewing data on the new strain and have yet to reach a final conclusion.

British health authorities have said the variant does not lead to an increase in cases of severe illness, and does not cause more serious side effects.

Researchers are still evaluating whether the strain will be more or less receptive to the vaccines currently being rolled out. Although no final conclusions have been made, health authorities have said the strain will not likely have an impact on the effectiveness of the vaccines.