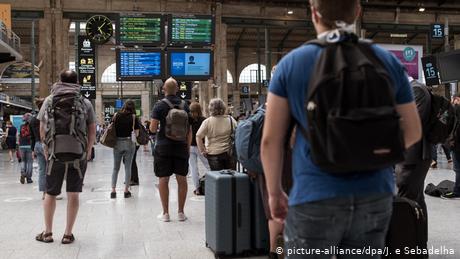 Officials from the European Union warned governments on Tuesday to reverse their decision to scrap transport links with the UK over coronavirus fears, saying that the move could leave millions of European citizens stranded for Christmas.

Several countries decided to ban planes and trains from entering their territory after the British government said they had discovered a new variant of the coronavirus that is believed to be as much as 70% more infectious.

Tuesday's proposals from the European Commission come after France and Germany called for a more 'coordinated' response to fighting the new variant of coronavirus.

"Given the need to ensure essential travel and transit home," the EU executive said in a statement, "Any prohibition of transport services, such as flight or train bans, should be discontinued."

The Commission said "non-essential travel" to and from Britain should be discouraged," but it added that European governments need to do more to ensure essential journeys can still be made.

"Blanket travel bans should not prevent thousands of EU and UK citizens from returning to their homes," said the EU's Justice Commissioner Didier Reynders.

But the guidelines are not legally binding. It will be up to EU governments to decide which recommendations they act upon, as, ultimately, it is up to the 27 member states how they decide to control their borders.

Ambassadors are set to meet debate the measures.

"It is important to take swift temporary precautionary action to limit the further spread of the new strain of the virus and all non-essential travel to and from the UK should be discouraged, essential travel and transit of passengers should be facilitated," the Commission said in a statement.

"Flight and train bans should be discontinued given the need to ensure essential travel and avoid supply chain disruptions," it added.

The EU said French President Emmanuel Macron's call for truckers coming from Britain to be subjected to strict testing requirements "should not lead to transport disruptions."

The white paper said lorry drivers crossing borders inside the EU should be exempted from Macron's demand for wide-spread testing or quarantine requirements.

Officials said essential travelers, such as medical staff, should undergo a test but should not be required to undergo quarantine.

But the EU executive recommended those travelers could use either RT-PCR tests or rapid antigen tests within 72 hours prior to departure.

France on Tuesday had called for PCR tests, which can take up to six hours to obtain the results, to be "at the center" of any EU response to the latest crisis.