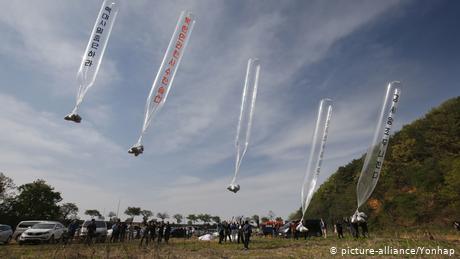 Foreign Ministry spokesperson Choi Young-sam told reporters on Tuesday that the Seoul government promises to strengthen communication with the international community, including the United States, to provide an extensive explanation of the decision to avoid any misunderstanding.

The amendment to the Development of Inter-Korean Relations Act, which passed the National Assembly earlier this month, calls for those who send leaflets across the border to be punished with up to three years in prison or a fine of up to 30 million won ($27,047, €22,130).

The amendment bars any scattering of printed materials, goods, money and other items of value across the border. It also restricts loudspeaker propaganda broadcasts, which the South's military once deployed as part of psychological warfare against Pyongyang until it withdrew the equipment following the 2018 summit between the two Koreas.

Choi said Seoul will note that the amendment does not apply to the act of sending anti-Pyongyang leaflets from a third country, South Korean broadcaster KBS reported.

During the Cabinet meeting, Prime Minister Chung Sye-kyun asked Unification Minister Lee In-young to make sure that the law is carried out in accordance with its purposes in a situation where "various opinions have been raised."

The measure has drawn criticism from rights activist, who say the move undermines the right to freedom of expression.

But Seoul, intent on improving relations on the splintered peninsula, has argued that the ban is necessary to protect the lives and safety of people living in border regions near the Demilitarized Zone. Sending such materials could provoke Pyongyang, which has long denounced the practice.

The ban is scheduled to take effect in three months. The ministry plans to produce a guideline before the law is put into effect.