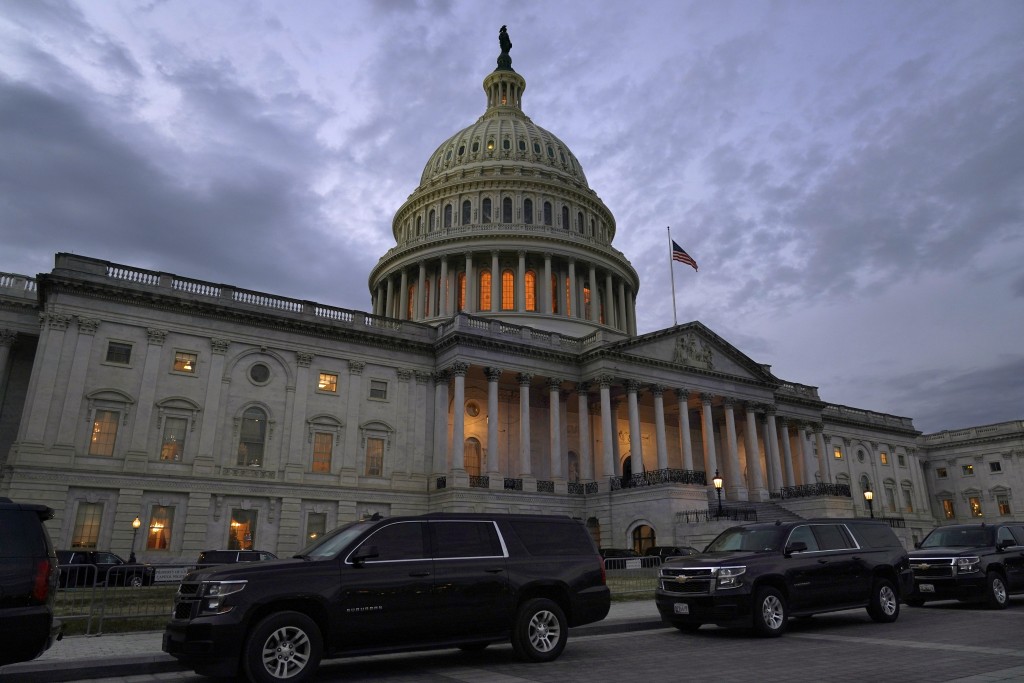 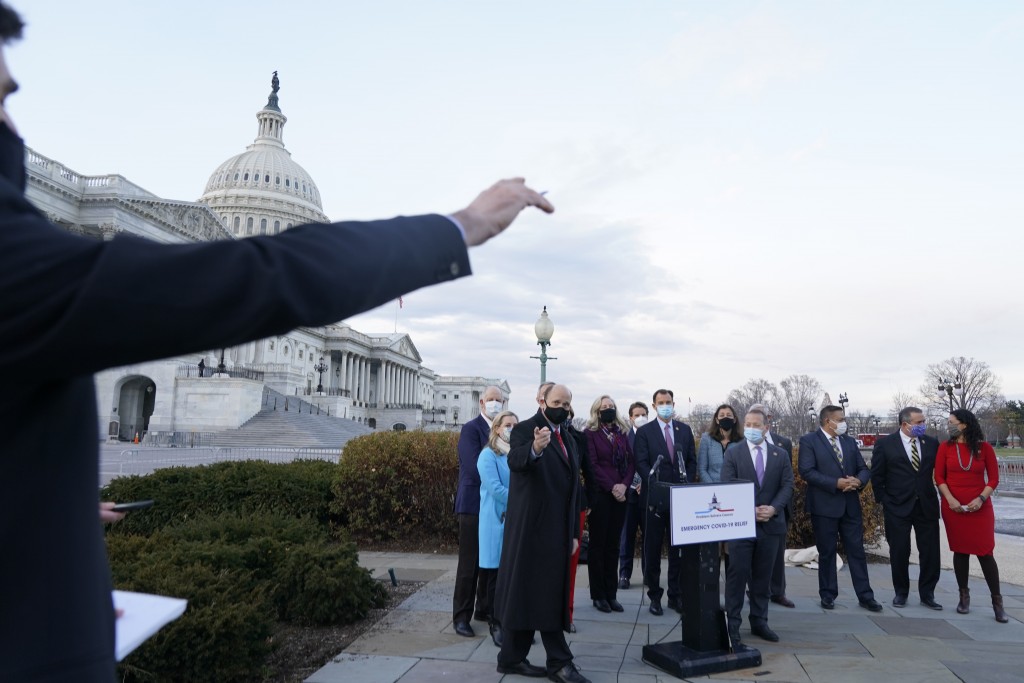 WASHINGTON (AP) — Congress passed a $900 billion pandemic relief package that would finally deliver long-sought cash to businesses and individuals and resources to vaccinate a nation confronting a frightening surge in COVID-19 cases and deaths.

Lawmakers tacked on a $1.4 trillion catchall spending bill and thousands of pages of other end-of-session business in a massive bundle of bipartisan legislation as Capitol Hill prepared to close the books on the year. The bill approved Monday night went to President Donald Trump for his signature, which was expected in the coming days.

The relief package, unveiled Monday afternoon, sped through the House and Senate in a matter of hours. The Senate cleared the massive package by a 92-6 vote after the House approved the COVID-19 package by another lopsided vote, 359-53. The tallies were a bipartisan coda to months of partisanship and politicking as lawmakers wrangled over the relief question, a logjam that broke after President-elect Joe Biden urged his party to accept a compromise with top Republicans that is smaller than many Democrats would have liked.

The bill combines coronavirus-fighting funds with financial relief for individuals and businesses. It would establish a temporary $300 per week supplemental jobless benefit and a $600 direct stimulus payment to most Americans, along with a new round of subsidies for hard-hit businesses, restaurants, and theaters and money for schools, health care providers and renters facing eviction.

The 5,593-page legislation — by far the longest bill ever — came together Sunday after months of battling, posturing and postelection negotiating that reined in a number of Democratic demands as the end of the congressional session approached. Biden was eager for a deal to deliver long-awaited help to suffering people and a boost to the economy, even though it was less than half the size that Democrats wanted in the fall.

Congress also approved a one-week stopgap spending bill to avert a partial government shutdown at midnight and give Trump time to sign the sweeping legislation.

The measure would fund the government through September, wrapping a year's worth of action on annual spending bills into a single package that never saw Senate committee or floor debate.

The legislation followed a tortured path. Democrats played hardball up until Election Day, amid accusations that they wanted to deny Trump a victory that might help him prevail. Democrats denied that, but their demands indeed became more realistic after Trump's loss and as Biden made it clear that half a loaf was better than none.

The final bill bore ample resemblance to a $1 trillion package put together by Senate Republican leaders in July, a proposal that at the time was scoffed at by House Speaker Nancy Pelosi, D-Calif., as way too little.

“The president-elect suggesting that we needed to do something now was helpful in moving both Pelosi and Schumer into a better place,” McConnell told The Associated Press. “My view about what comes next is let's take a look at it. Happy to evaluate that based upon the needs that we confront in February and March."

Vice President-elect Kamala Harris, D-Calif., came to the Senate to cast her vote for the bill. “The American people need relief and I want to be able to do what I can to help them,” she said.

On direct payments, the bill provides $600 to individuals making up to $75,000 per year and $1,200 to couples making up to $150,000, with payments phased out for higher incomes. An additional $600 payment will be made per dependent child, similar to the last round of relief payments in the spring.

“I expect we’ll get the money out by the beginning of next week — $2,400 for a family of four," Mnuchin said. “So much needed relief just in time for the holidays.”

The $300 per week bonus jobless benefit was half the supplemental federal unemployment benefit provided under the $1.8 billion CARES Act in March. That more generous benefit and would be limited to 11 weeks instead of 16 weeks. The direct $600 stimulus payment was also half the March payment.

The CARES Act was credited with keeping the economy from falling off a cliff during widespread lockdowns in the spring, but Republicans controlling the Senate cited debt concerns in pushing against Democratic demands.

“Anyone who thinks this bill is enough hasn’t heard the desperation in the voices of their constituents, has not looked into the eyes of the small-business owner on the brink of ruin,” said Senate Democratic leader Chuck Schumer, a lifelong New Yorker who pushed hard for money helping his city's transit systems, renters, theaters and restaurants.

Progress came after a bipartisan group of pragmatists and moderates devised a $908 billion plan that built a middle-ground position that the top four leaders of Congress — the GOP and Democratic leaders of both the House and Senate — used as the basis for their talks. The lawmakers urged leaders on both sides to back off of hardline positions.

“At times we felt like we were in the wilderness because people on all sides of the aisle didn’t want to give, in order to give the other side a win," said freshman Rep. Elssa Slotkin, D-Mich. “And it was gross to watch, frankly.”

Republicans were most intent on reviving the Paycheck Protection Program with $284 billion, which would cover a second round of PPP grants to especially hard-hit businesses. Democrats won set-asides for low-income and minority communities.

The sweeping bill also contains $25 billion in rental assistance, $15 billion for theaters and other live venues, $82 billion for local schools, colleges and universities, and $10 billion for child care.

The governmentwide appropriations bill was likely to provide a last $1.4 billion installment for Trump’s U.S.-Mexico border wall as a condition of winning his signature. The Pentagon would receive $696 billion. Democrats and Senate Republicans prevailed in a bid to use bookkeeping maneuvers to squeeze $12.5 billion more for domestic programs into the legislation.

The bill was an engine to carry much of Capitol Hill’s unfinished business, including an almost 400-page water resources bill that targets $10 billion for 46 Army Corps of Engineers flood control, environmental and coastal protection projects. Another addition would extend a batch of soon-to-expire tax breaks, such as one for craft brewers, wineries and distillers.

It also would carry numerous clean-energy provisions sought by Democrats with fossil fuel incentives favored by Republicans, $7 billion to increase access to broadband, $4 billion to help other nations vaccinate their people, $14 billion for cash-starved transit systems, $1 billion for Amtrak and $2 billion for airports and concessionaires. Food stamp benefits would temporarily be increased by 15%.

The Senate Historical Office said the previous record for the length of legislation was the 2,847-page tax reform bill of 1986 — about one-half the size of Monday's behemoth.