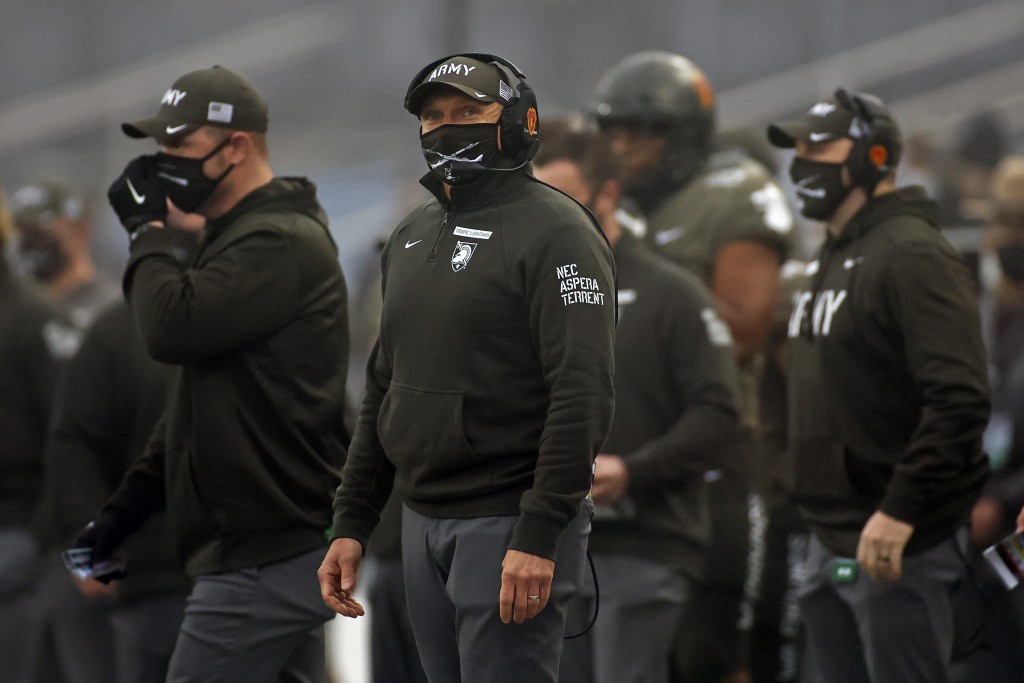 After two straight emotion-packed weekends, Army coach Jeff Monken and his Black Knights are coping with a major letdown.

The Black Knights shut out archrival Navy at Michie Stadium just over a week ago and finished an undefeated eight-game home season on Saturday by beating Air Force to win the Commander-in-Chief’s Trophy. But the good feelings from that accomplishment took a big hit Sunday night when Monken had to tell his players their bowl game was canceled.

“I felt like I had let them down,” Monken said Monday. “I felt like I didn’t follow through on the promise that I’ve given them, that if they earned the opportunity to get in a bowl game that they’re going to get a chance to play.”

Army, one of only seven FBS independents, went from being the first team in the country to land a bowl bid — in late October the Independence Bowl extended an invitation in the locker room after the Black Knights had won their sixth game — to one without a spot when no Pac-12 opponent agreed to play and the game scheduled for this Saturday in Shreveport, Louisiana, was canceled.

“It’s hard because we know how much we’ve worked for this season and everything we did,” senior linebacker Jon Rhattigan said. “Certainly, we want to go out with a bowl victory on top of the Commander-in-Chief’s Trophy. For that to be in question is not something we’re too happy about right now.”

More than 20 teams chose not to accept bowl invitations, ending what has been a stressful and at times frustrating season amid the coronavirus pandemic. That led to the unusual situation of postseason games not having enough teams to fill the slots, and the number of bowl cancellations began to rise. The total reached 16 on Monday when the Military Bowl on New Year's Eve in Annapolis, Maryland, was canceled. Executive director Steve Beck had tweeted he hoped to bring Army there.

“Essentially, we got stuck without one," Monken said. “As it turned out, there were more teams than there were bowl games, and by the end of the day some of those teams that opted out, as I understand, may have been offered a chance to play us and said, ‘Hey, we don’t want to do that.’ That’s the way it goes.”

Army has a three-year deal with the Independence Bowl that also includes 2022 and 2024.

“Those are our friends, folks who believe in our program, in our institution, in our United States Army, and want to give us the opportunity to represent all of those people in their bowl game,” Monken said. “And I will tell you that they were crushed themselves. The person that deals with our athletic department was in tears, just wanted this game to happen so bad and they tried, they tried so hard.”

Monken said he wasn't mad at the system, just disappointed in the teams that had an option to play and chose not to, "and here we’ve got a 9-2 team that I would challenge has gone through more this year than any team.”

“We’ve got guys that have been here since the first of June and haven’t left campus," he said. “They haven’t seen their parents, seen friends, even here on campus. The COVID numbers were spiking to the point where we took our team and put them in a bubble within our bubble. It’s really hard for a kid that age to not see his parents. I can’t imagine going seven months without seeing my parents, and they’ve been doing that and still want to play.”

The decision about what to do next was left to the seniors, and after a meeting it was unanimous — the Black Knights will wait and hope for an invitation somewhere.

“Our team wants to practice. They want to prepare so in case a game becomes available they want to be ready. That’s in their DNA,” Monken said. “These guys are going to serve in the Army. That’s what the Army does. The Army doesn’t plan. They just prepare. That’s who we are as a team, so if somebody says, ‘Yep, you can come play in our bowl game,’ our guys are ready. Aren’t those the kinds of people you want out there fighting for your freedom?”

If nothing transpires by Thursday morning, the players will be sent home for Christmas — and wait.

“If a team drops out or something happens with COVID, all you’ve got to do is say the word and I’ll assure you we’re going to be flying 100 guys from different places in the country right to that game,” Monken said. "We’ll practice one time, the day we get there, and go play the game the next day.”

Even if that call never comes, the seniors will leave with an impressive legacy — an academy-record 35 victories for one class.

“If that’s what happens, I’m still very proud to be a part of this team,” Rhattigan said. “The things that I have learned and the growth that I’ve experienced is something that will always be of value. While it’s unfortunate that we might not be able to play in a bowl game, it’s not the end of the world.”