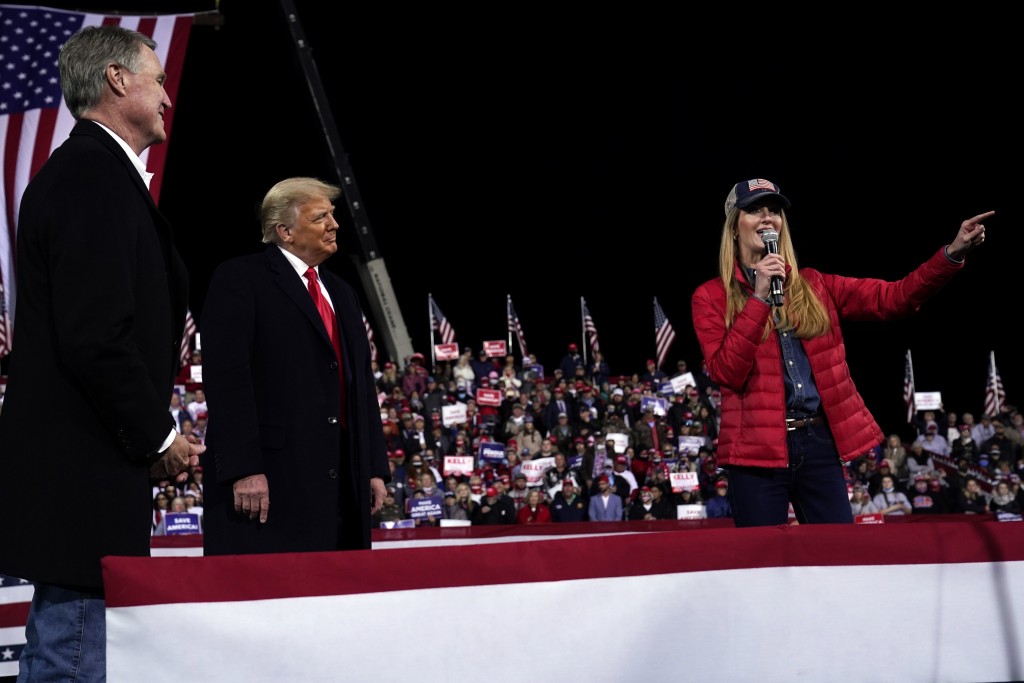 The statements, over the weekend and on Monday, came after the companies Smartmatic and Dominion raised the prospect of legal action for reporting what they said was false information about them.

Both companies were referenced in the campaign's suggestion that vote counts in swing states were manipulated to the advantage of President-elect Joe Biden. The companies deny several statements made about them, and there is no evidence any voting system switched or deleted votes in the 2020 election.

A nearly two-minute pre-taped segment was aired over the weekend on Fox Business Network programs hosted by Lou Dobbs and Maria Bartiromo, and a Fox News Channel show with Jeanine Pirro.

That came days after Smartmatic sent a letter threatening legal action to Fox and two other networks popular with Trump supporters, Newsmax and One America News Network.

The two-minute Fox segments aired in the form of a question-and-answer session between an offscreen voice and Eddie Perez, a voting technology expert at the nonpartisan Open Source Election Technology Institute.

“I have not seen any evidence that Smartmatic software was used to delete, change or alter anything related to vote tabulations,” Perez said.

The company says its only work that involved the 2020 U.S. election came in Los Angeles. Trump lawyer Rudolph Giuliani has falsely claimed that Smartmatic was founded in Venezuela by former dictator Hugo Chavez for the goal of fixing elections. Smartmatic was started in Florida in 2000. Its founder is Venezuelan, but the company said Chavez was never involved, and its last work in Venezuela came in 2017 when its software found the government had reported false turnout numbers.

After the segment aired Sunday on Bartiromo's show, she said, “So that is where we stand right now. We will keep investigating.”

Perez also said there was no apparent business relationship between Smartmatic and Dominion; Trump's lawyers have claimed with no evidence that Dominion's vote counting system used at some locations in the U.S. elections had used Smartmatic's software.

Asked Monday about the segments, Smartmatic's lawyer, J. Erik Connolly, said the company “cannot comment on the recent broadcast by Fox News due to potential litigation."

The network did not comment beyond the on-air segments aired over the weekend.

A statement aired by Newsmax anchors on Monday, and also printed on the company website, was much broader and concerned both Smartmatic and Dominion.

In the statement, Newsmax said there were “several facts our viewers and readers should be aware,” among them the lack of a business relationship between the two companies or that Dominion had any ownership relationship with George Soros, House Speaker Nancy Pelosi and others.

“No evidence has been offered that Dominion or Smartmatic used software or reprogrammed software that manipulated votes in the 2020 election,” Newsmax said.

Company spokesman Anthony Rizzo said Newsmax itself had never made a claim of impropriety, but that others had appeared on the network to raise questions about Smartmatic.

“As any major media outlet, we provide a forum for public concerns and discussion,” he said.

There was no immediate response to a request for comment from OANN.

Dominion has not specifically targeted any news organization. Instead, last week its lawyers sent a letter to Sidney Powell, demanding the Trump supporter retract several of the “wild and reckless” allegations she has made about them. The company said some of its employees have been stalked, harassed and received death threats.

Powell, an appellate lawyer from Texas, was part of the president's legal team immediately after the election but was disavowed after making accusations of a scheme to manipulate voting machines.

In its letter to Powell, Dominion lawyers Thomas Clare and Megan Meier said that the company had no ties “to the Chinese government, the Venezuelan government, Hugo Chavez, (British politician) Malloch Brown, George Soros, Bigfoot or the Loch Ness Monster.”

Powell did not immediately return a request for comment.

Clare said Dominion's immediate focus is on Powell for what she has been saying about the company.

“Moving forward, we will certainly be taking a close look at others who have participated directly in the defamatory campaign, as well as those who have recklessly provided a platform for these discredited allegations,” he said.