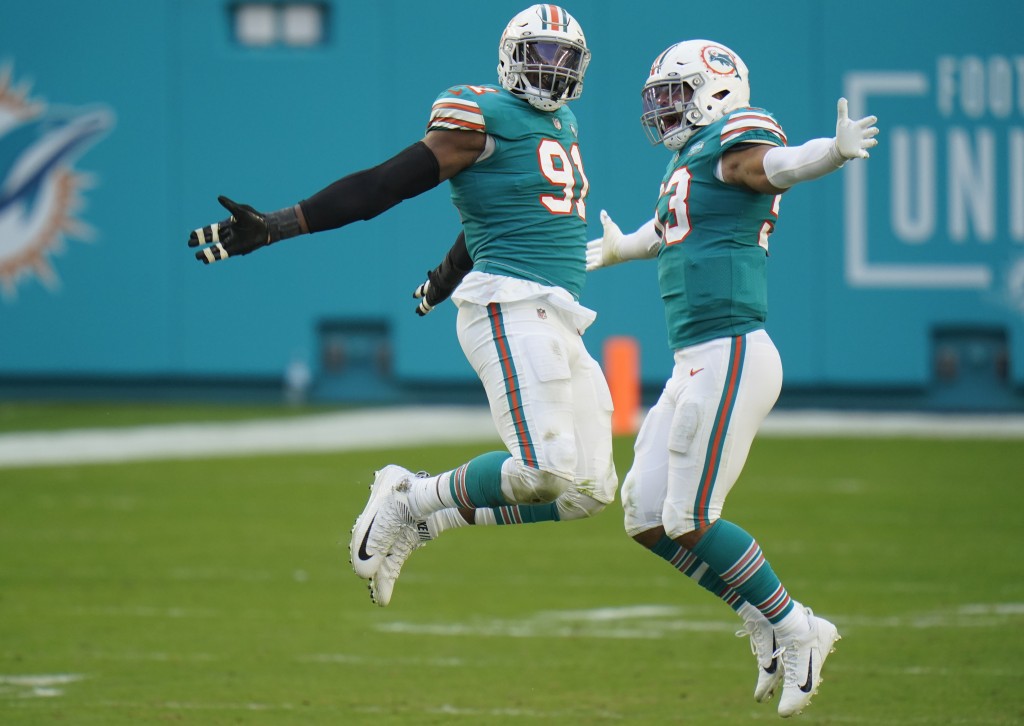 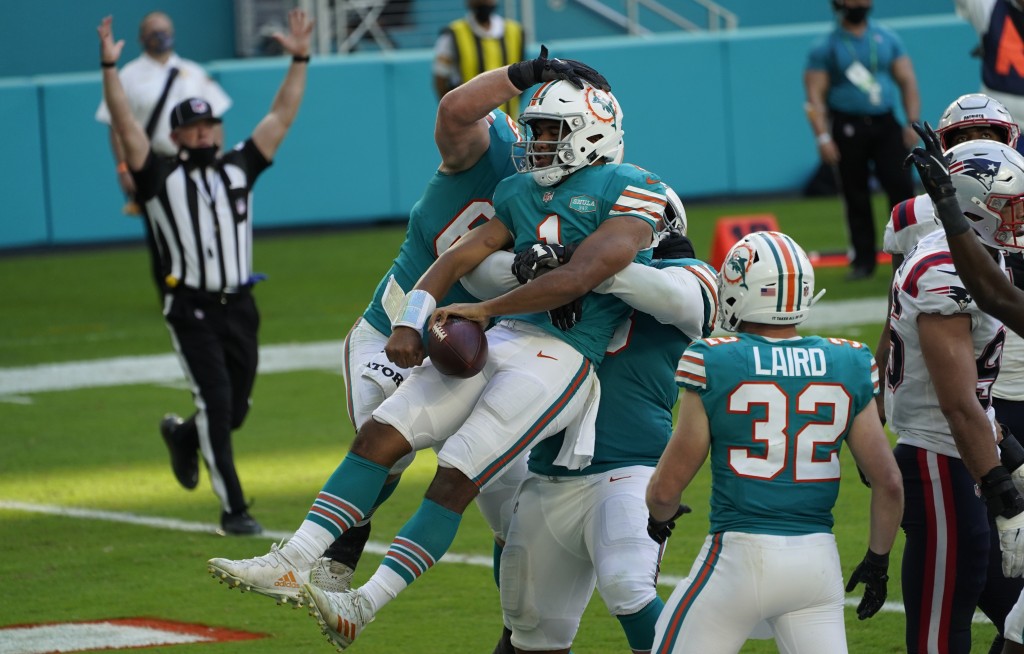 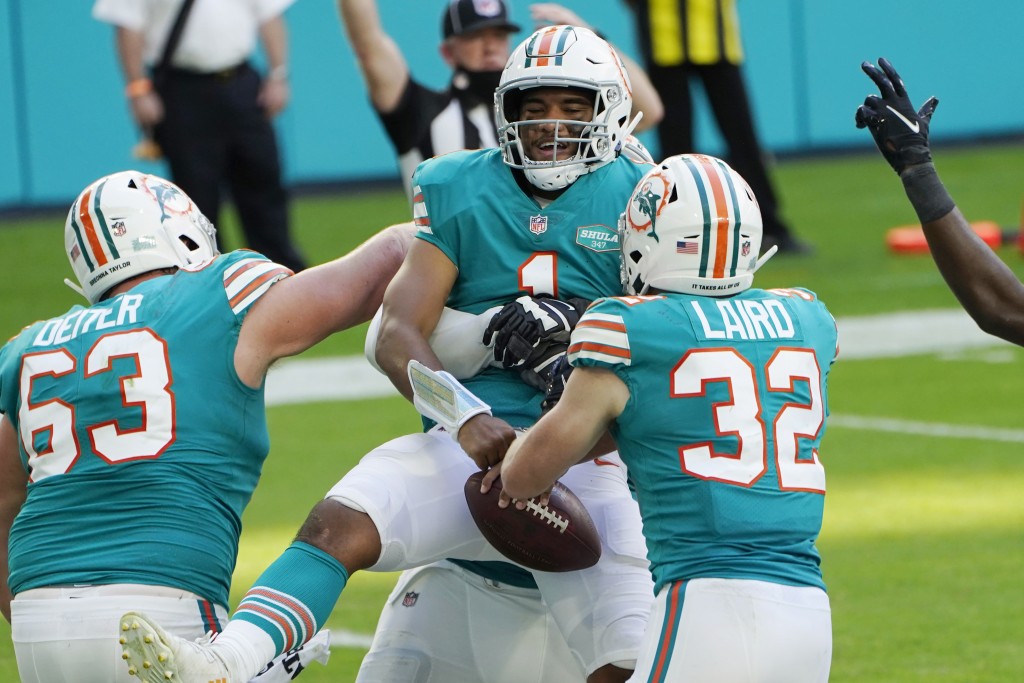 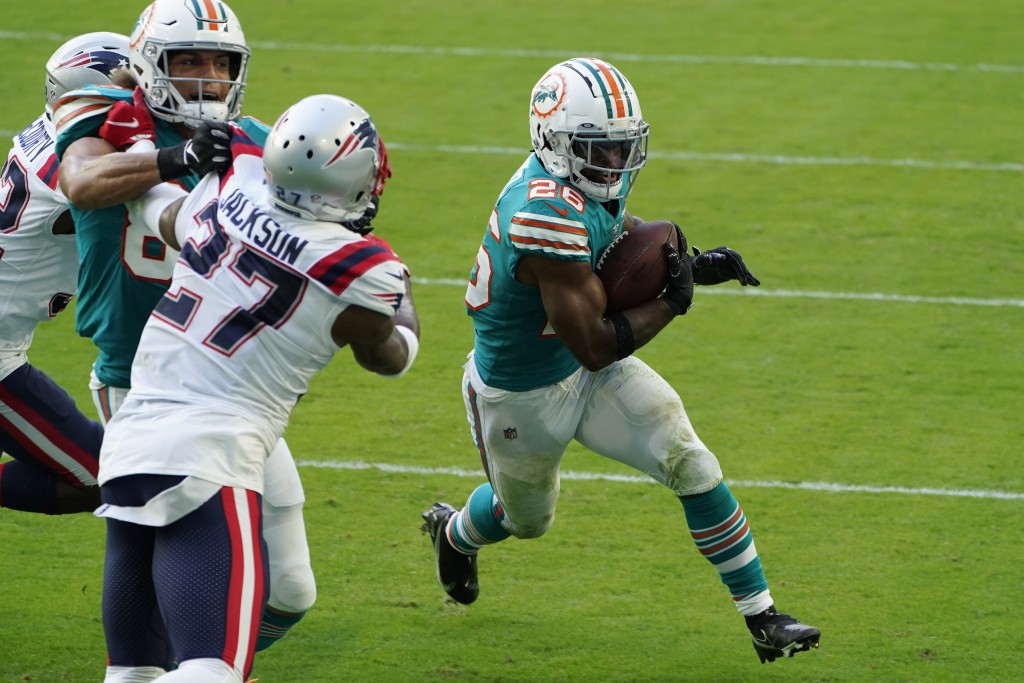 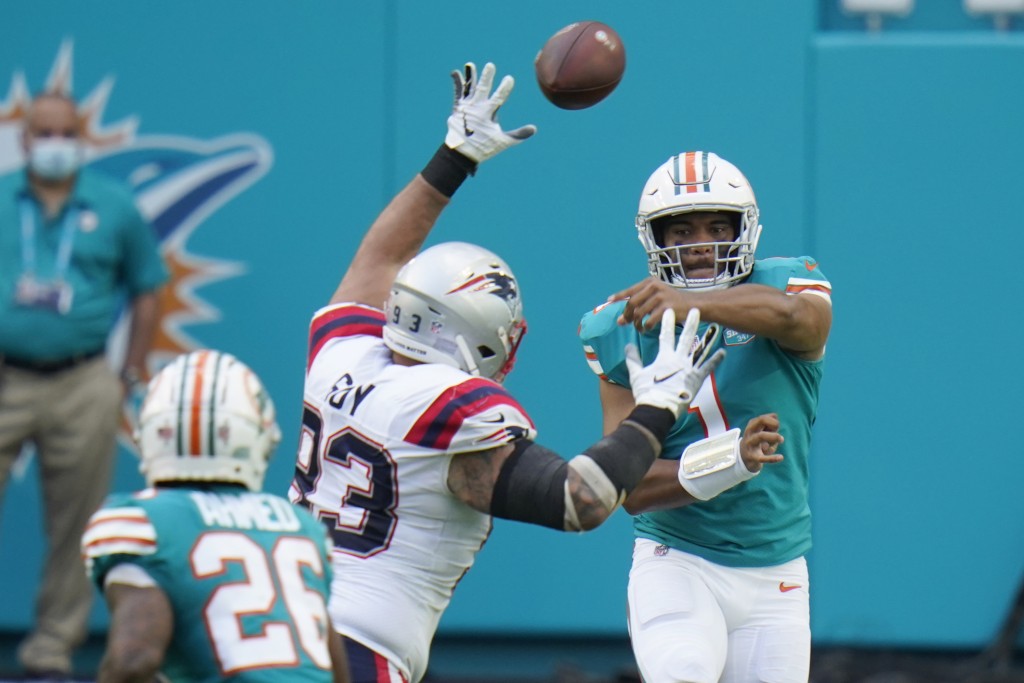 MIAMI (AP) — With their latest win, the Miami Dolphins may have found a new path to the playoffs — by keeping the ball on the ground.

A suddenly viable running attack helped the Dolphins (9-5) beat New England and retain control of their chances in the race for an AFC wild-card berth.

In Sunday's 22-12 victory, the Dolphins rushed for 250 yards, their highest total since 2016. It was an uncharacteristically muscular performance by an offense that came into the game ranked last in the NFL in yards per carry.

Even some of those watching from the Miami sideline were surprised.

“I was like, ‘That’s crazy,’" Dolphins defensive tackle Raekwon Davis said. "But congrats to the offense. That was a big, big, big step for them running the ball. That’s something they wanted to keep working on, and that was perfect.”

The win left the Dolphins tied for the seventh-best record in the race for seven AFC playoff spots. They're assured of making the postseason for only the third time since 2001 if they win their final two games at Las Vegas and at Buffalo, which has already clinched the AFC East.

Without a sweep, the Dolphins are long shots. FiveThirtyEight rates their chance of making the postseason at just 31%.

“Our playoffs is this week against the Raiders,” coach Brian Flores said Monday. “Let’s call it the playoffs. That’s where my focus is. It’s a one-game season.”

Ahmed is a rookie, one of six who started on offense Sunday. Miami started three rookies in the offensive line, and the unit had by far its best game. The blockers wore down the Patriots, clearing the way for 175 yards rushing after halftime.

“They make it easy on me,” Ahmed said. “They get pushed down the field, and all I got to do is follow behind some big dudes.”

Matt Breida added a season-high 86 yards rushing, and the Dolphins mounted drives of 95 and 90 yards that helped them build a 15-minute edge in time of possession.

Miami may try for more of the same the next two weeks. The Raiders rank 26th in run defense, and the Bills are 20th.

“We want to build on execution,” Flores said. “Every week is a different challenge. It's nice to have some success, but it doesn’t really mean anything in the next game.”

The Dolphins' top four pass catchers sat out Sunday, and they were missed. Tua Tagovailoa threw for just 145 yards, including 73 to wideouts.

The Dolphins' top pick in the 2021 draft is trending upward, because they own Houston's first-round choice. The Texans (4-10) lost Sunday, and only three teams have a worse record.

“I tried to do everything I could to get in the end zone,” he said. “I've just got to work a little bit more on some other dance moves.”

20 — consecutive games for the Dolphins' takeaway streak, the NFL's longest. They had a fumble recovery Sunday, but Xavien Howard's 86-yard fumble return for a score was erased by a replay review because defensive end Christian Wilkins had a foot out of bounds when the loose ball touched him.

“I definitely feel for X on that," Wilkins said. “I did my best. When you get 310 pounds running full speed, it’s hard to stop, jump and move out of the way.”

The Dolphins play Saturday night at the Raiders (7-7), whose playoff hopes have faded due to losses in four of the past five games.