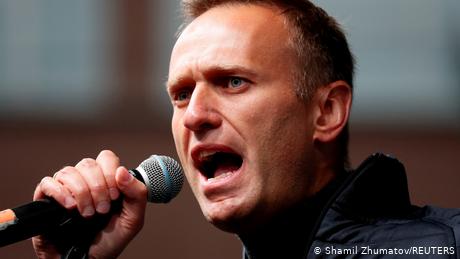 In a story that seems more like something out of a James Bond movie than real life, prominent Russian opposition leader Alexei Navalny, who is currently recovering in Germany after being poisoned, was allegedly able to contact and record an interview with one of the Russian Federal Security Service (FSB) agents with knowledge of the attempt on his life.

As revealed by the investigative journalism platform Bellingcat, during the lengthy conversation, the operative unwittingly admitted that the FSB was indeed behind poisoning operations against Navalny, something Russian officials continue to deny.

Navalny posted a video on his YouTube channel Monday titled "I called my killer. He confessed." The video showed him speaking on the phone with one of the alleged operatives.

Part of an investigation by Bellingcat and Russian media outlet The Insider and in cooperation with CNN and Germany's Der Spiegel news magazine, journalists have now identified other members of a team of FSB agents who allegedly stalked Navalny over the last several years and were involved in attempts to poison him.

The investigation, endorsed by Navalny, names the agents and poison laboratories allegedly responsible for the attack based on data that includes phone logs and travel records.

Though several calls were initially unsuccessful, Navalny eventually convinced one agent, Konstantin Kudryavtsev, who at the time worked with an elite toxins team, to reveal many details about the operation.

Introducing himself as the fictional Maxim Ustinov, an "aide to [Chairman of Russia's Security Council] Nikolai Patrushev," Navalny claimed he was compiling a post-action report on the assassination attempt — a report that in other situations could be read by Putin himself.

Throughout the nearly hourlong conversation, most of which Navalny recorded, the agent reveals that though he was not directly involved in poisoning Navalny, he was deeply involved with efforts to clean up any traces of the lethal nerve agent Novichok that had been planted in the crotch of Navalny's underwear.

Asked to analyze what went wrong with the assassination operation, Kudryavtsev said the flight landed too soon for the poison to do its work and that the first responders were too professional.

According to transcripts of Navalny's call, Kudryavstsey described the measures used by FSB operatives to cover-up residues from the toxins, including how operatives over several days cleaned his clothes and personal items of any traces. Kudryavtsev also names other FSB operatives involved.

The recording appears to prove that the FSB attempted to assassinate, not simply incapacitate or intimidate, Navalny. Moreover, the attempt was not a one-off event but had been part of a long-running campaign to murder him.

During the conversation, Kudryavstsey said that if the flight "had been a little longer, I think the situation could have gone differently."

In a remarkable exchange, Navalny asked if "this person," meaning himself, had only "survived because the plane landed too soon?" Kudryavstsey responded in the affirmative, adding that had the paramedics also not acted so competently, then Navalny would likely have died.

Navalny, feigning confusion, cited time pressure from his superiors while asking bluntly, "was the plan to let him die in the hotel or on the plane?" Kudryavstsey responded: "I don’t have any information about that…[but] I think it was supposed to happen shortly thereafter…Or maybe it was calculated that he would fly, because you know, yes, it takes three hours or so to fly, it’s a long flight. If we didn’t land the plane, maybe there would have been a different effect."

Bellingcat's toxicology experts suggested it would be impossible to properly dose and administer a less-than-lethal amount of a cholinesterase inhibitor nerve agent of the Novichok type.

Though the FSB allegedly made concerted efforts to cleanse Navalny’s body, clothes and personal effects of toxin residue, traces were eventually discovered.

Navalny asked Kudryavstsey how the Germans eventually discovered it. "Well, they got the Bundeswehr involved. They have military chemists working there. Maybe they have some methods of detection."

Labs in Germany, France and Sweden, and tests by the Organization for the Prohibition of Chemical Weapons, established that Navalny was exposed to a Soviet-era Novichok nerve agent.

Kudryavtsev stated that the highest concentrations of toxic residue could be found on Navalny’s clothes, particularly in "the inside of Navalny’s underpants" and "the seams in the crotch area."

Russian President Vladimir Putin denied any state involvement in the poisoning of Navalny in comments made during a nationally televised press conference last week. At the event, Putin said that recent reports of any Russian state security agents attempting to poison Navalny were part of a US intelligence plot to discredit him.

Suggesting instead that perhaps the poisoning could have taken place in Germany and not in Russian, Putin implied that had the FSB actually intended to assassinate Navalny, they would have done so.