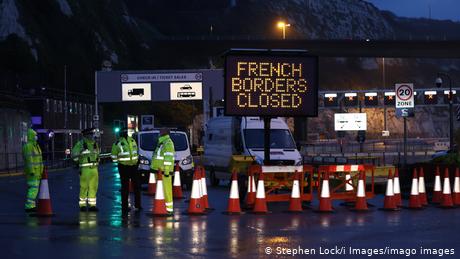 European stocks slumped Monday as several European Union countries imposed flight bans from the UK to stop the spread of a new highly infectious strain of coronavirus found in England.

As crude prices slid over concerns that the new measures could hurt travel well into the new year, energy majors BP, Total and Royal Dutch Shell had lost between 3% and 6% by mid-afternoon.

By the afternoon, the main indices had regained some of their losses but New York's S&P 500 Index traded more than 1% lower.

Market analysts said the new mutation could be a major setback in the global fight against the pandemic, despite the approval of several vaccines.

"This new strain suggests that not only could it[ Britain] be in for a [bad] couple of months... [but the new strain] could make things far, far worse: more restrictions, more lockdowns ... more of an economic toll," Craig Erlam, senior market analyst at OANDA Europe, told news agency AFP.

The decision to cut flights effectively shuts off the UK from the rest of Europe, giving a sneak peek of the likely chaos if the country fails to strike a trade deal with the EU by the end of the month.

More than a dozen European countries, including Germany, France, the Netherlands and Italy, issued the bans in response to the emergence of the new strain, which is up to 70% more contagious than existing strains.

While most countries are still permitting cargo arrivals, France went a step further by banning freight lorries from arriving from England by sea.

The decision means that freight trucks cannot cross the English Channel by ferry or through the Eurotunnel, prompting the closure of England's Port of Dover to outbound traffic.

The port is one of the UK's most important trade arteries with mainland Europe.

On Monday, thousands of trucks were stranded for miles close on highways to the entrance to the Channel Tunnel and Dover, where local police introduced Operation Stack, to park or "stack" heavy-goods vehicles in the emergency or inside lanes and minimize disruption to other traffic.

Many lorries are carrying fresh fish supplies from Scotland meant for the European mainland, while others were due to bring back fresh food for the UK market.

Britain's second-largest supermarket chain Sainsburys warned that gaps would start to appear on shelves within days if transport ties are not quickly restored.

It urged the UK and French governments to come to a mutually agreeable solution that prioritises the immediate passage of produce and any other food at the ports.

Britain's Road Haulage Association wrote on Twitter that the French border closure is an "absolute hammer blow" for the supply chain between the UK and the EU.

"While goods can enter from France, few haulage firms will be willing to send trucks and drivers across to the UK without a guarantee they can return to the EU in a timely manner," warned Andrew Opie, director of food & sustainability at the British Retail Consortium, in a statement.

Vanessa Ibarlucea, spokeswoman for France's FNTR national road haulage federation, said the disruption was "becoming a catastrophe," and that "no driver wants to deliver to the UK now, so the UK is going to see its freight supply dry up."

UK Transport Secretary Grant Schapps told Sky News that France's freight ban was "slightly surprising'' but that the Dover-Calais/Eurotunnel freight route makes up just 20% of goods moving in and out of the country.

"Most goods actually come in and out by unaccompanied containers and those will continue to flow,'' he insisted.

Schapps said the government would work to get the bans lifted as soon as possible but that the country was well positioned for disruption due to preparations for the end of the Brexit transition period.

Britain left the EU in January, but so far little about its trading relationship with the bloc has changed. However, the two sides are deadlocked over future trade arrangements, which must be agreed upon before the end of December.

Business groups have warned of lengthy delays and a slew of new bureaucracy even if a new deal is struck and that the delays to trade will be exacerbated if the flight and freight entry ban persists.

Despite the severe disruption, a spokesperson for UK Prime Minister Boris Johnson said the transition period end date would not change.

The source said significant gaps remain in talks but that Britain would continue to work to bridge those gaps.

He said as the UK would need to ratify any trade deal befre January 1, "time is in very short supply."

The UK economy remains 9.7% below where it started the year due to the impact of curbs to battle the pandemic. In the first six months of the year, UK GDP fell 22.3%.

Although it has since rebounded by 15.5% in the third quarter, post-Brexit concerns are weighing on business and consumer sentiment.

French Transport Minister Jean-Baptiste Djebbari said a European-wide mechanism would be set up to allow freight and flight traffic with the UK to resume as soon as possible.

"In the coming hours, at [the] European level, we will be putting in place a solid health protocol so that flows from the United Kingdom can resume. Our priority: protect our nationals and fellow citizens," he wrote on Twitter.

However, the reaction from the financial markets suggests the fast spread of the new strain could lead to global travel curbs that also impact other countries.

As well as EU states, Canada, Israel, India and Hong Kong have, so far, restricted flights from the UK.