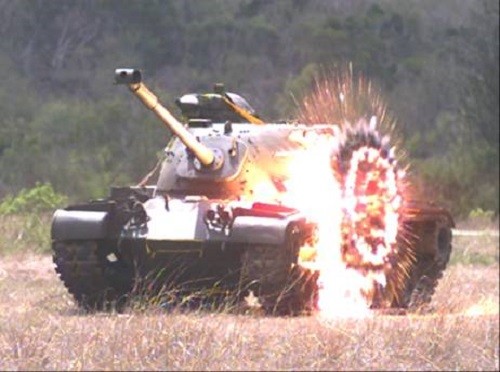 TAIPEI (Taiwan News) — In response to a video released by China's state-run media showing People's Liberation Army (PLA) tanks "successfully defeating" Taiwanese forces in a mock urban battle, a retired general says that such a tactic would "court death" at the hands of Taiwan's anti-tank rockets.

On Dec. 13, China's state-run mouthpiece CCTV posted a video showing a recent exercise in which PLA Type 96A main battle tanks and Type 04 infantry fighting vehicles crushed a smaller defending force in a simulated urban environment, indicating that this would be the next swift phase of victory after successfully landing on Taiwan's shores. In the war games, a unit with red markers entered the faux fray with 230 troops and 30 tanks, representing the PLA, against a defending force in blue consisting of 70 men and six tanks, symbolizing Taiwanese defense forces. On an episode of the SET TV show "New Taiwan Refueling" that aired on Friday (Dec. 18), Yu Tsung-chi (余宗基), a retired major general and former head of the Cultural and Psychological Operations Division of the Ministry of National Defense’s Political Warfare Bureau, said "First of all, he [China] does not understand Taiwan. Basically, there are not many beaches where their troops can make a successful landing." He asserted that even if the tanks somehow were able to be deployed on Taiwan's handful of beaches, the elevated highways that are found all around Taiwan can serve as excellent roadblocks and barriers.

Yu said that PLA tank battle planners are still stuck in a World War I or World War II mindset. He said that nowadays, tanks cannot enter cities because they would be "courting death," pointing out that Taiwan possesses an arsenal of over 400 "Kestrel" anti-tank rockets, which are made by the country's National Chung-Shan Institute of Science and Technology (NCSIST).

He pointed out that every city and township has high-rise buildings from which the rockets could be fired from. Yu claimed that the Chinese tanks "most fear being struck in the middle" and that as Kestrels are easily deployed on any tall building, tanks entering an urban area would "court death." In response to Yu's comments, military expert Wang Chen-ming 王臻明 on his Facebook page on Saturday (Dec. 19) wrote: "It turns out the military really thought about this tactic. The West Coast Expressway runs from New Taipei City to Tainan City. It basically follows the coastlines. Most of it is elevated and can be used like the 'Atlantic Wall' as a last resort. With tens of millions of tons of concrete, even if the enemy tanks can get through the beaches, they would not be able to climb this roadblock."

However, he frankly confided, "When I heard this statement before, I thought it was just a joke." He also emphasized that using elevated highways as roadblocks is "the last resort."