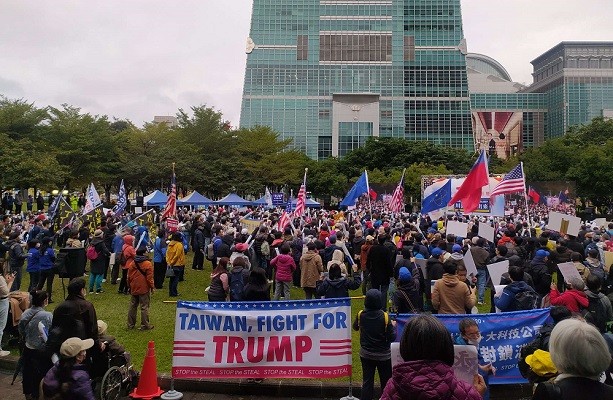 TAIPEI (Taiwan News) — With throngs of people waving the stars-and-stripes and signs with slogans such as "Stop the steal" in central Taipei Saturday (Dec. 19), passersby would have been forgiven for mistaking the scene for an American battleground state like Pennsylvania or Georgia — if not for the iconic Taipei 101 looming in the background.

The rally was organized by The Epoch Times newspaper, which listed six main reasons for holding the event: support for U.S.-Taiwan cooperation; support for independent media free from Chinese state control; opposition to "pro-China" mainstream media; opposition to censorship by social media and corporations; opposition to political collusion with China; and opposition to business groups that choose profit over national interests.

The Epoch Times is affiliated with the Falun Gong spiritual movement, whose practitioners are heavily persecuted in China, and frequently targets the Chinese Communist Party (CCP) in its pages. The publication was a significant supporter of President Trump's re-election bid, buying up more Facebook ad space than any other organization besides the Trump campaign itself.

The outlet has also notably still not called the presidential election for Joe Biden, even after the Electoral College's confirmation of the election results last week, with Biden taking 306 electoral votes to Trump's 232.

On its website, The Epoch Times regularly updates the progress of the many lawsuits Trump and his supporters have filed, the vast majority of which have failed to stick. Still, the site proclaims: "Election Outcome Unclear Amid Legal Challenges."

This puts the publication in line with the over 80 percent of Trump voters. While demonstrations in support of Trump's quixotic cause to overturn the election results are outliers outside the U.S., that Saturday's rally drew hundreds in the Taiwanese capital comes as no surprise. Taiwan was the only country to favor the incumbent president over Biden (42 to 30 percent) in surveys conducted in various Asian and European countries before the election. Demonstrators with pro-Trump signs and flags in the shadow of Taipei 101. (Taiwan News photo)

Trump's support in Taiwan is largely based on his willingness to take on China, which threatens to absorb the nation — by force if necessary — and uses its clout to lure away its remaining allies and exclude it from international bodies. Since 2018, Trump's America has clashed with China over a range of issues, including trade, intellectual property rights, Hong Kong, human rights abuses in Xinjiang and Tibet, the South China Sea, the coronavirus pandemic, and 5G.

Taiwanese have also warmed up to Trump after he signed into law a number of bipartisan bills that benefit their country, and arms sales to the East Asian state have increased on his watch.

One participant in the rally, a student surnamed Hu (胡), said the sales "protect [Taiwan's] democracy." He believes Trump has been a force for peace, listing the president's role in normalizing relations between Israel and Bahrain as an example. He also expressed a fear that the "Deep State" has infiltrated the American government and that Trump is the only leader not under the alleged conspiracy's control.

An Ohio native named Robert who took part in the demonstration said he was there to support freedom, the U.S., Trump, and Taiwan.

Meanwhile, a Canadian named Joanne said Trump is "the only leader in the free world that has done anything for Taiwan — that has taken it seriously." She cited economic deals and weapons sales as examples of improved relations with Taiwan under Trump. As for Biden, she called him a puppet and said his son Hunter has been "bought off," a reference to the ongoing federal investigation into the latter's business dealings with Chinese companies.

An assistant manager of marketing for The Epoch Times in Taiwan claimed social media companies had actively been working to sabotage Trump. She told Taiwan News that Facebook's Chinese-language staff had intentionally mistranslated Trump's words and claimed YouTube is removing videos that throw the election into doubt in order to conceal the truth.

YouTube announced two weeks ago it would begin deleting content that contained misinformation about the election outcome.

Regarding the Trump lawsuits, most of which have been rejected — even by judges appointed by Trump himself — she also alleged shadow government involvement and claimed the mainstream media has failed to sufficiently cover the lawsuit hearings. "People want to know the facts," she said, "but they don't know where to go, so they come to us." 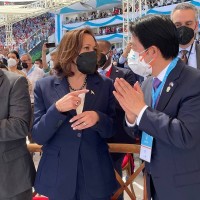