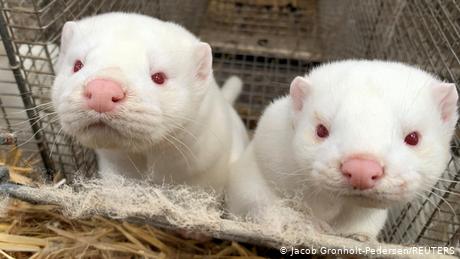 Four million minks culled in Denmark over a mutant coronavirus strain will be exhumed next year to prevent contamination, the Scandinavian country's government said.

The move follows complaints from residents about potential health risks after some of the mink had resurfaced.

In November, the government of Denmark — the world's largest fur exporter — ordered all of the country's roughly 15 million minks be killed.

This came after mutated versions of the coronavirus were found to have developed in the animals and jumped to at least 373 people.

But of the 4 million minks hastily buried at a military area in the west of the country, some soon began to resurface from the sandy soil after gasses from the decomposition process pushed the animals upwards, and out of the ground.

Authorities claimed there was no risk of the graves spreading the novel coronavirus, but citizens have complained about the risk of contaminating drinking water and a nearby lake.

The Food and Agriculture Ministry said in a statement that the government had gained support in Parliament to dig up the minks. It said the work would begin in May next year, after the risk of infection from the remains has completely passed.

The exhumed animals are to be taken to nearby waste incinerators.