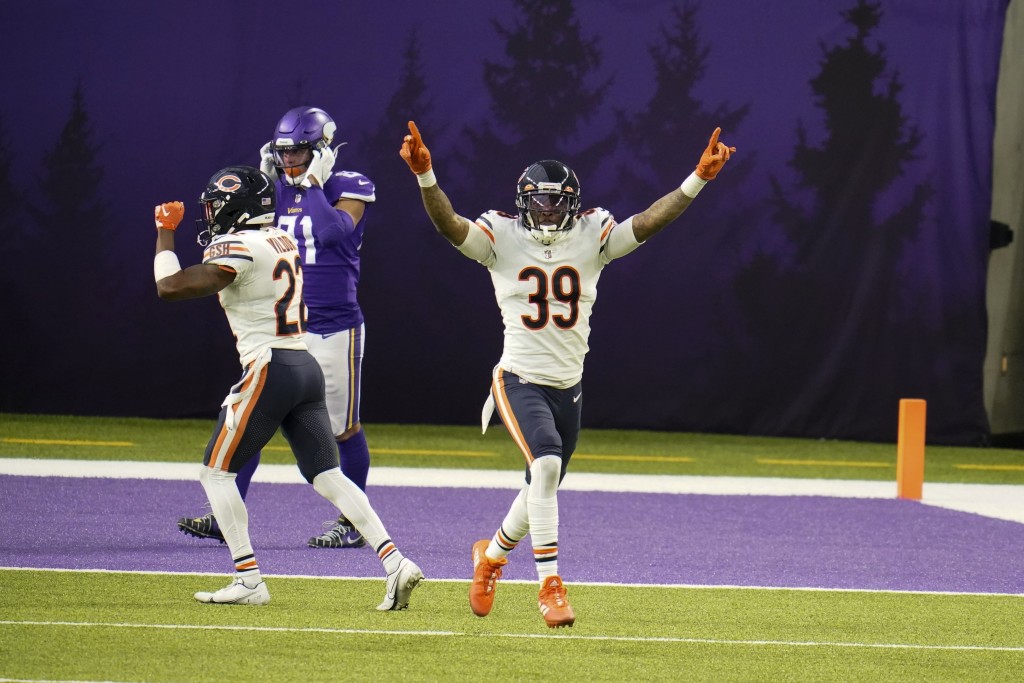 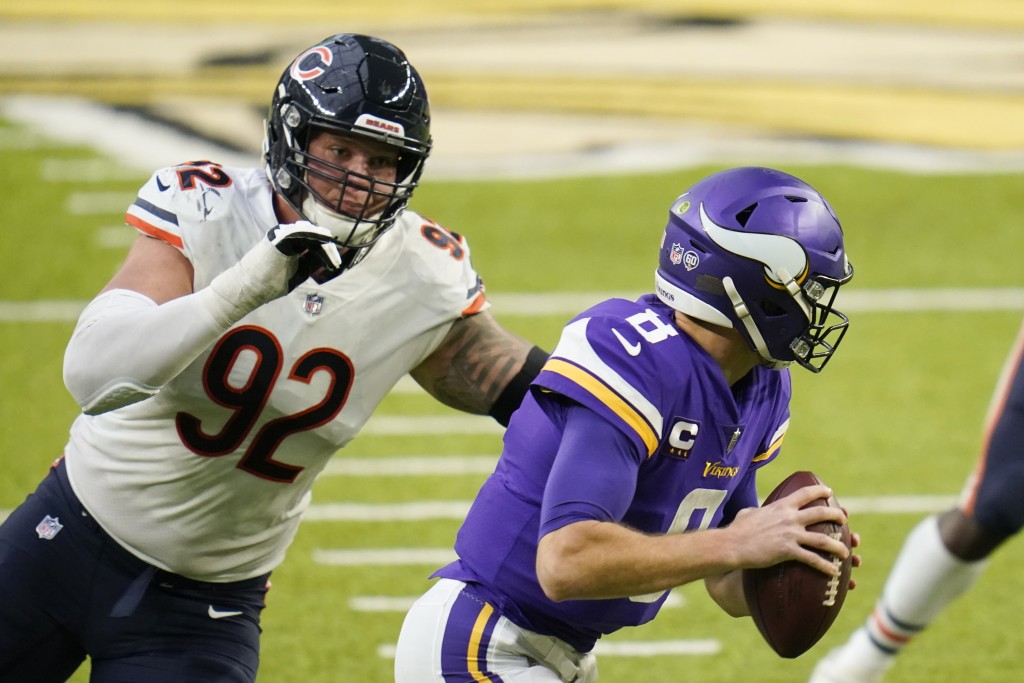 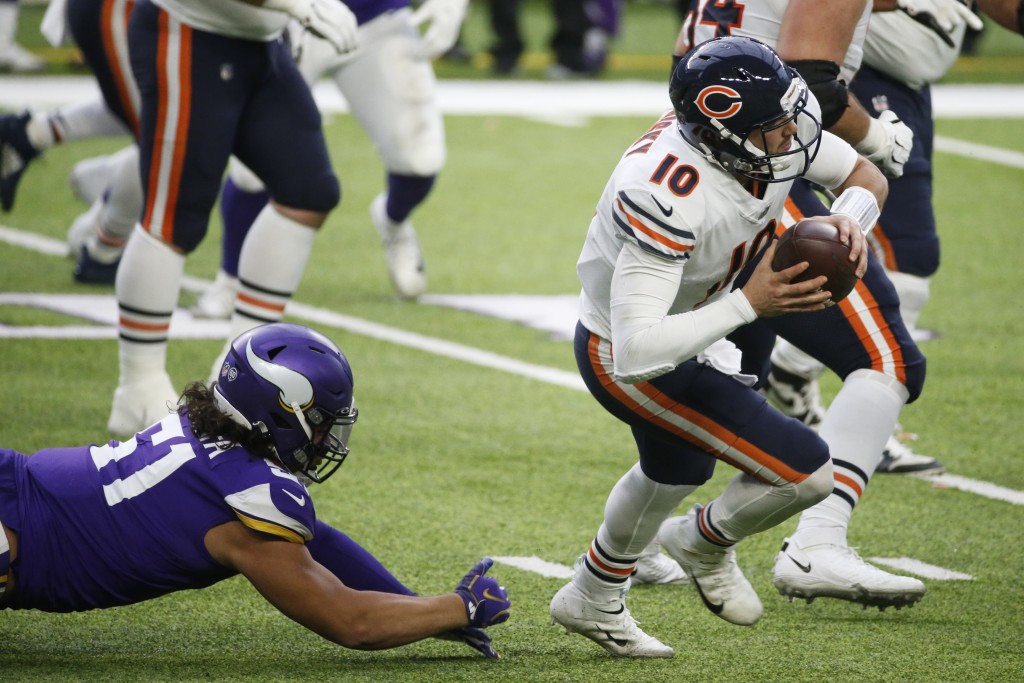 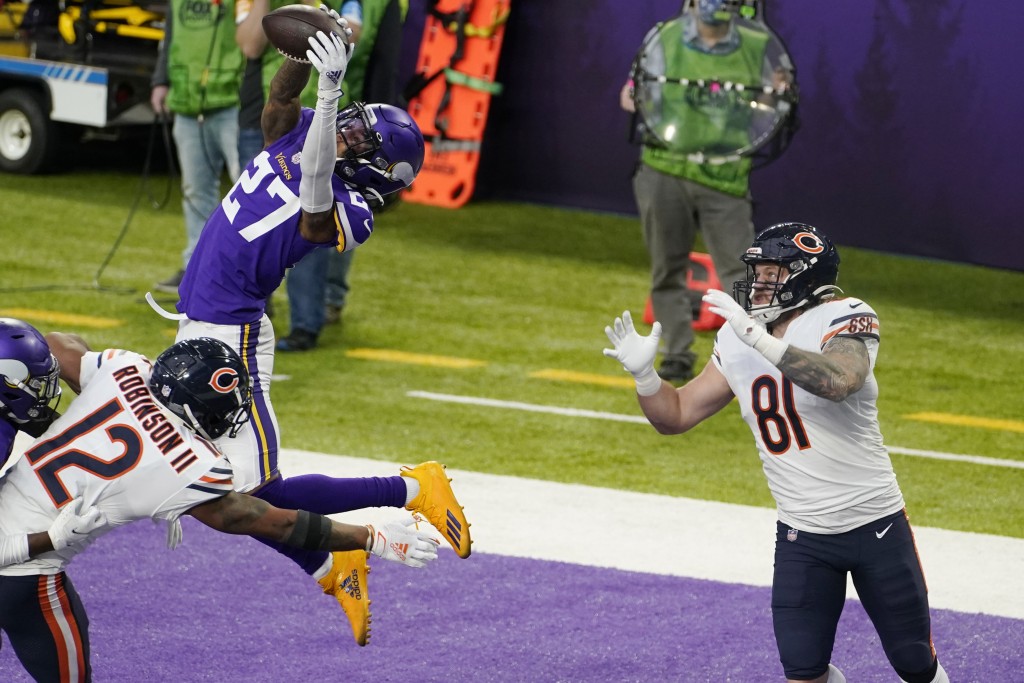 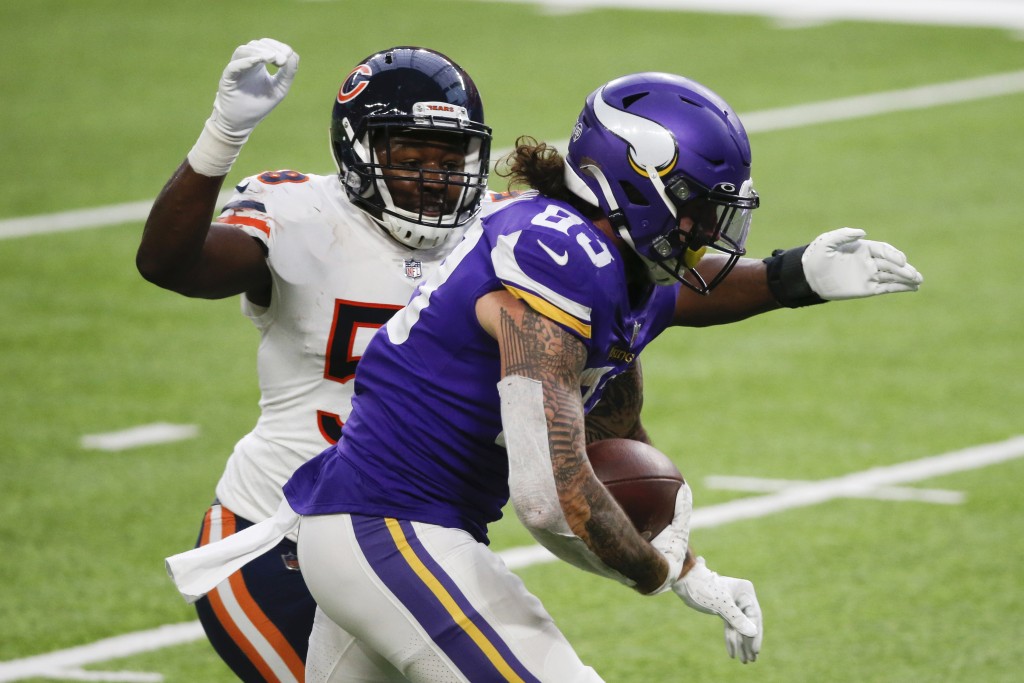 MINNEAPOLIS (AP) — David Montgomery rushed for a career-high 146 yards and two touchdowns as the Chicago Bears trampled Minnesota's depleted defense and hung on for a 33-27 victory on Sunday to stay in the hunt for the expanded playoffs.

The Bears (7-7), who entered the afternoon one game behind Arizona for the new third wild-card spot in the NFC, never trailed in winning at Minnesota for a third straight year. Coach Matt Nagy improved to 5-1 against the Vikings (6-8), whose postseason chances all but vanished.

Chicago punted only once, on the opening possession. It did just about whatever it wanted with the ball until Cameron Dantzler intercepted Mitch Trubisky’s third-and-goal pass into a crowd in the end zone with 2:57 left and a 30-27 lead.

But the Bears, who were plenty vulnerable on defense themselves, delivered their second fourth-and-1 stop in Minnesota territory to get the ball right back for a field goal.

Dalvin Cook rushed for 132 yards and a score, but he was stuffed on third-and-1 before a pivotal incompletion by Kirk Cousins throwing off his back foot. Cairo Santos, who converted all four of his kicks, stretched his streak to 22 straight field goals made.

The Bears then intercepted a last-snap heave by Cousins into the end zone to drop the Vikings to 3-5 at home this year.

Cousins connected with tight end Tyler Conklin for his first career touchdown catch, a 20-yard score off a play-action rollout that pulled the Vikings within three points with 8:05 remaining.

Justin Jefferson had eight receptions for 104 yards and set the single-season franchise rookie record held by Randy Moss with 73 catches and counting. But steady pressure on Cousins produced too many short completions — or worse — for the Vikings to catch up.

When the Vikings beat them 19-13 five weeks ago in Chicago, the Bears managed two first-half field goals and needed a kickoff return touchdown by Cordarrelle Patterson to stay competitive. That was offensive coordinator Bill Lazor's first turn as the play caller, after Nagy relinquished the responsibility in search of a spark.

But despite losing twice more to stretch their streak to six straight defeats, the offense found a higher gear. Trubisky settled back in at quarterback following the injury to Nick Foles. Left tackle Charles Leno Jr. was the only offensive lineman in the same place as in the previous meeting, when Montgomery was out with a concussion.

The Vikings played without star linebacker Eric Kendricks for the third straight game, applying little pressure on Trubisky and missing Montgomery often on their first-attempt tackles.

Vikings: LB Troy Dye departed in the third quarter for concussion evaluation. ... DT Armon Watts limped off with a lower leg injury in the fourth quarter.

Bears: play at Jacksonville next Sunday.