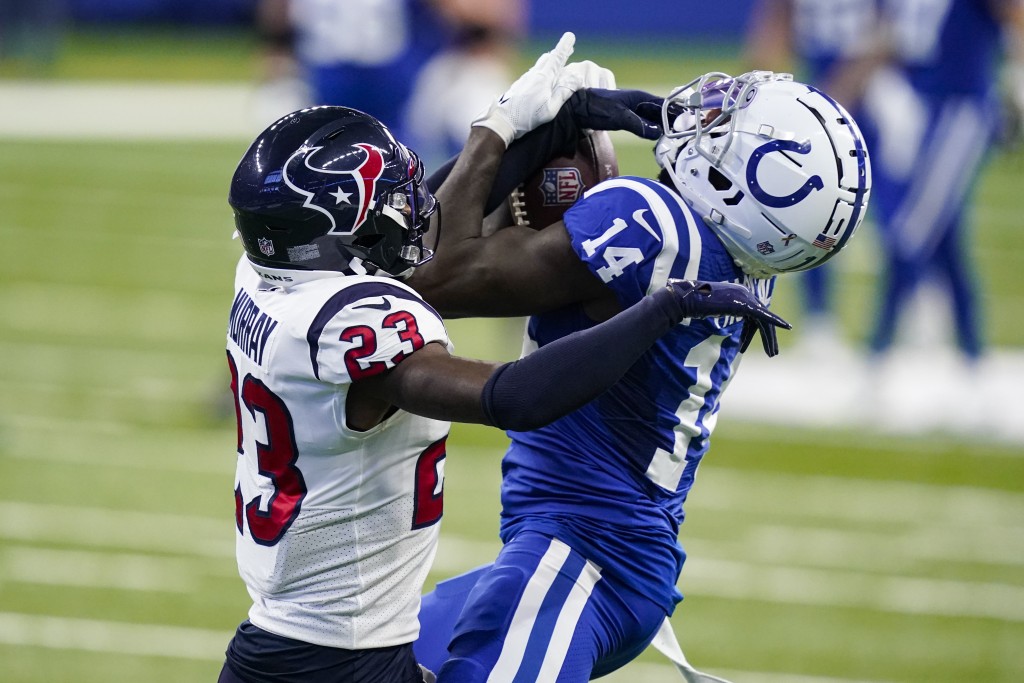 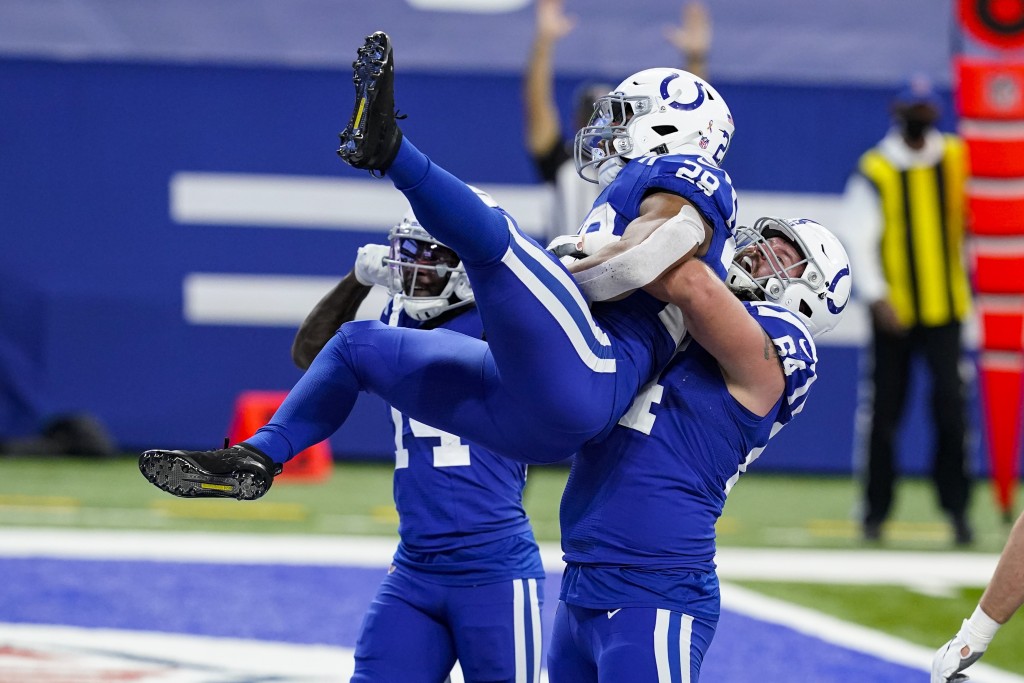 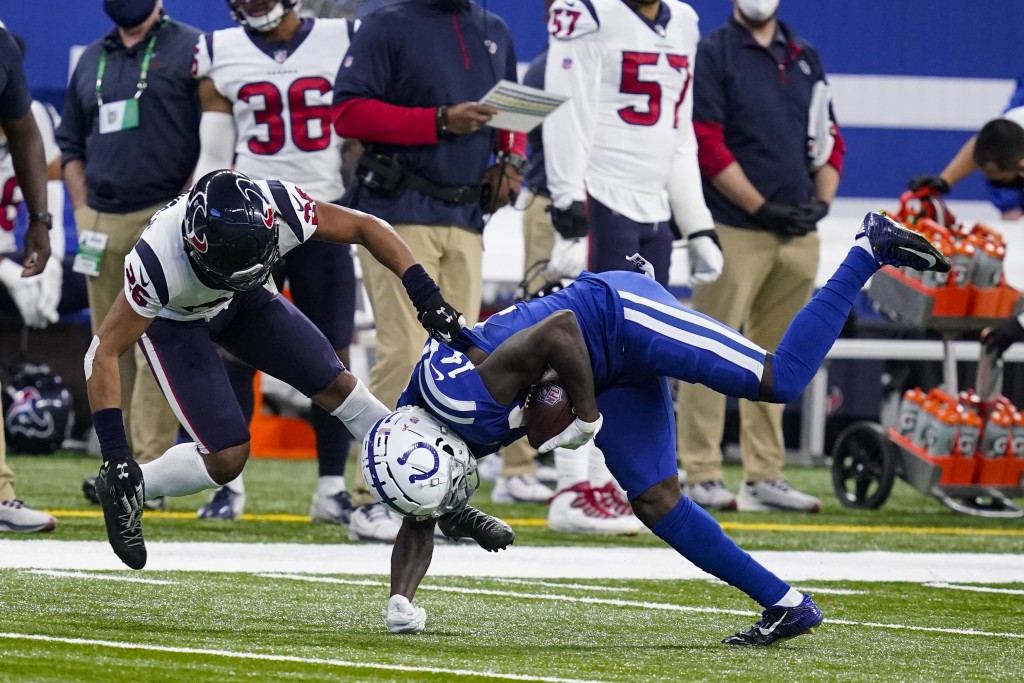 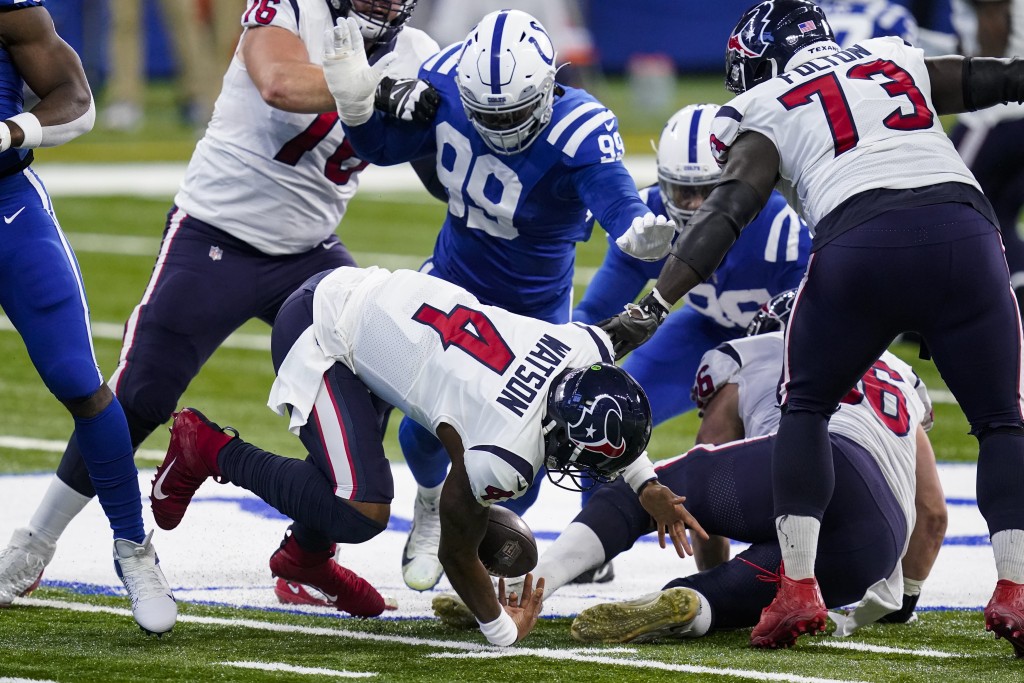 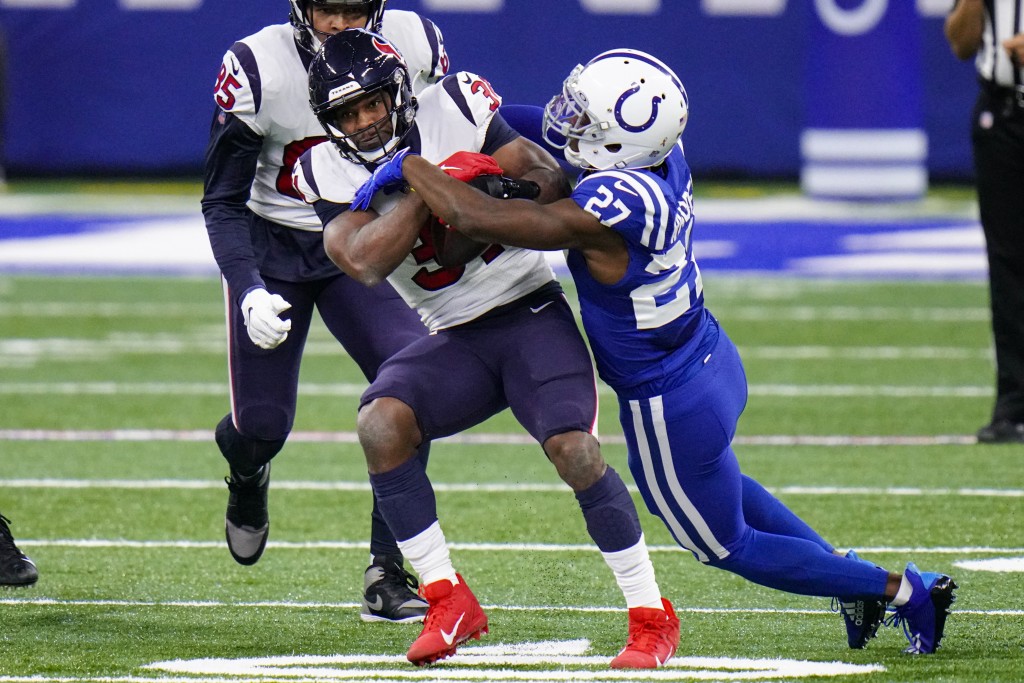 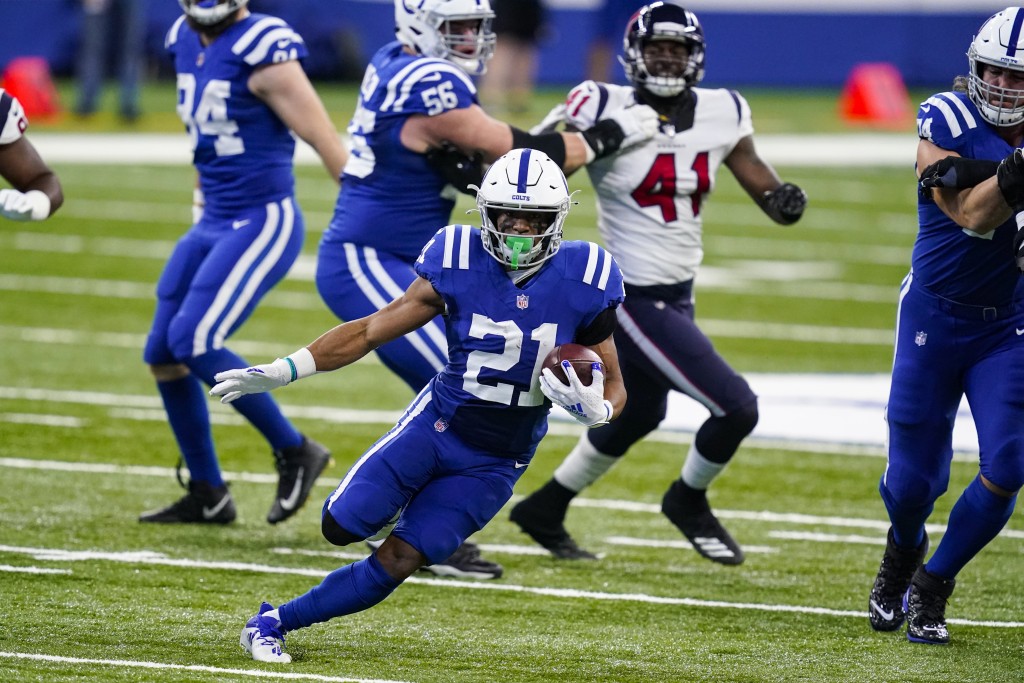 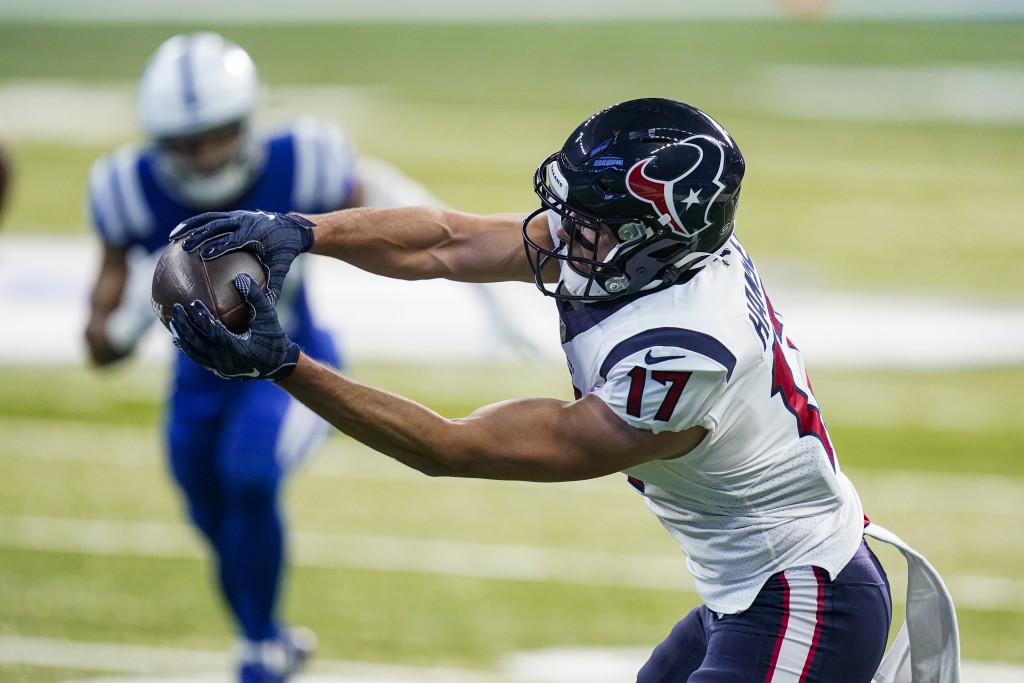 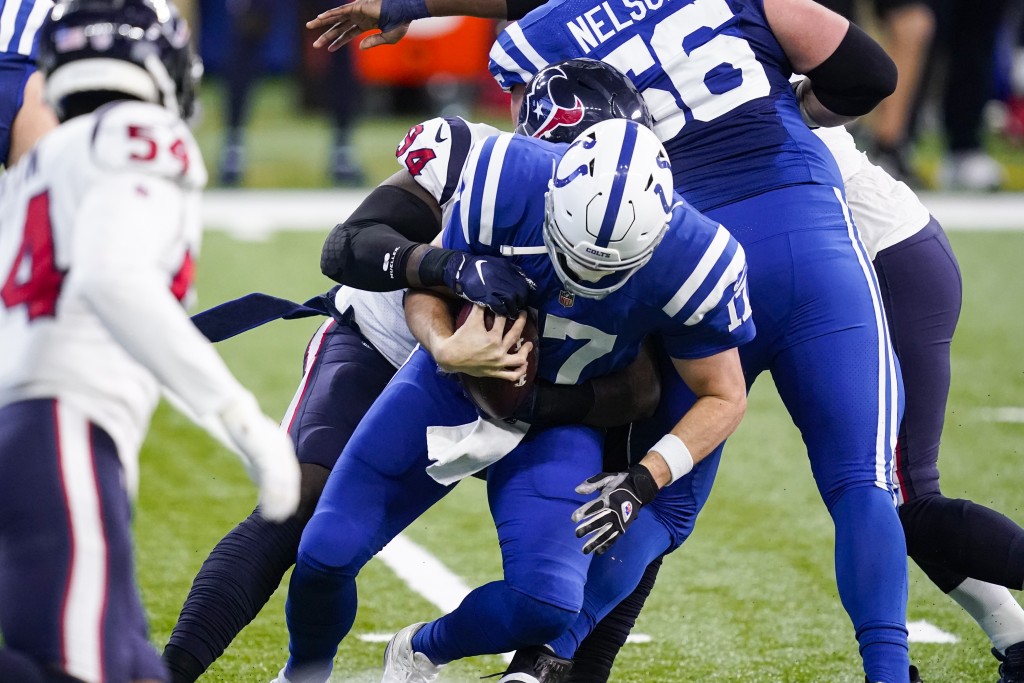 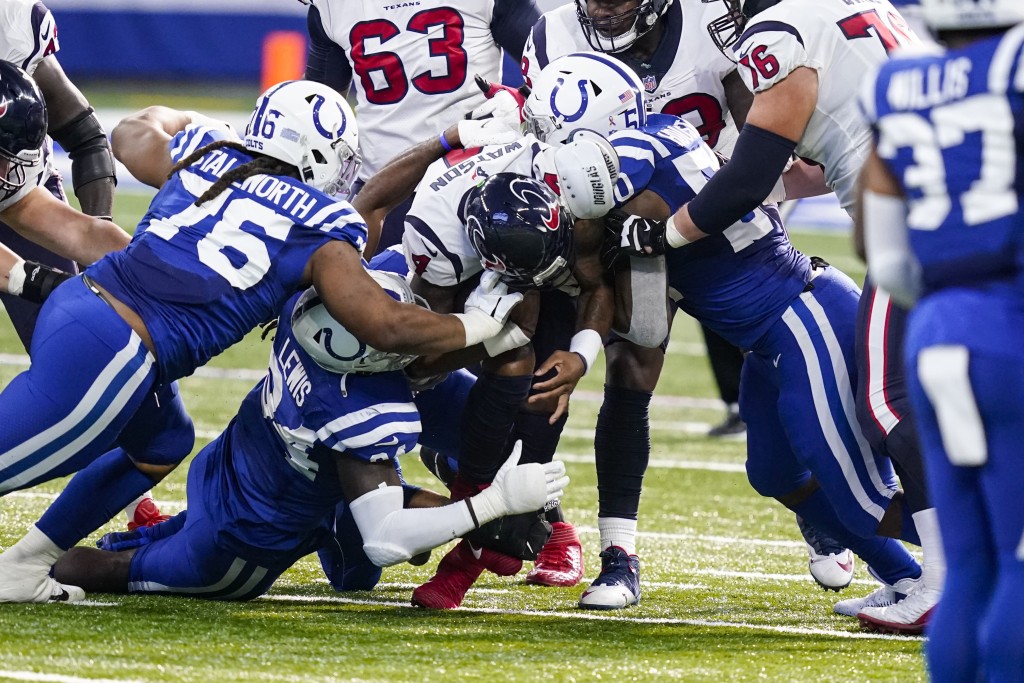 INDIANAPOLIS (AP) — Philip Rivers threw a late, tiebreaking touchdown to Zach Pascal and the Indianapolis Colts defense recovered a fumble in the end zone with 19 seconds left Sunday to seal a 27-20 victory over the Houston Texans.

Indy (10-4) has won three straight to retain a share of the AFC South lead with Tennessee, winners over Detroit. Houston (4-10) has lost three straight and five of six in this series.

The Colts won this one in similar fashion to the teams' meeting two weeks ago. The Texans had a chance to win that one in the final minute but Indy jumped on a bad snap to quarterback Deshaun Watson inside the red zone.

This time, Pascal caught a pass in the flat, turned up the field and stretched his arms across the goal line while hitting the pylon to give Indy a 27-20 lead with 1:47 to go.

Watson answered by moving the Texans to the Colts 21. But after finding Keke Coutee for 14 yards on third-and-11, Colts linebacker Darius Leonard punched the ball out at the 2-yard line and Bobby Okereke beat Texans tight end Kahale Warring to the ball as it bounced in the end zone.

Watson was 33 of 41 with 373 yards and two touchdowns. Coutee had five catches for 53 yards and one score before the fumble, and David Johnson had 11 receptions for 106 yards.

Indianapolis was thrilled to have punter Rigoberto Sanchez back in action less than three weeks after he underwent surgery to remove a cancerous tumor. Sanchez wants to keep details about the location private.

He couldn't contain his excitement, either, pumping his arms and blowing kisses to the crowd as he jogged onto the field.

Sanchez initially became concerned when he struggled warming up to do kickoff duty at practice Nov. 25. He was advised to undergo an MRI, which detected the tumor. Sanchez punted in that week's game, a loss to Tennessee. The next day he announced he was having surgery Dec. 1.

Colts: Receiver Marcus Johnson left in the first half with an injured quad and did not return.

Rivers started his 238th consecutive game and tied Tony Gonzalez for No. 8 on the league's career starts list. He also threw two TD passes, giving him 419 in his career — one short of tying Hall of Famer Dan Marino for fifth all-time.

Kicker Rodrigo Blankenship made all three extra point attempts to give him a franchise rookie record 38 — two more than Jim O'Brien made in 1970. O'Brien also made the Super Bowl-winning field goal with 9 seconds to go that season.