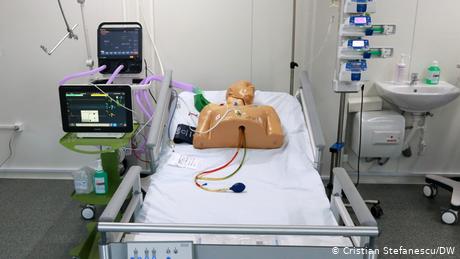 "As an intensive care doctor, I'm prepared to save people's lives. What I wasn't prepared for was risking my own life to do it," says Dana Tomescu. The head of department No. 3 for Anesthesia and Intensive Care Medicine at the Fundeni Clinical Institute in Bucharest jumps right in before the DW reporter has finished asking the first question.

What's her experience of the pandemic? She feels "under threat," she says. For months now, she has been fighting around the clock to save the lives of the most seriously ill COVID patients. "The fears I had at the beginning, before I started dealing with COVID patients, have lessened, but they haven't gone away," she says.

The COVID death rate in Romania is high, including among medical personnel. In early December, the trade union Solidaritatea Sanitara reported an average of 6.8 deaths per 1,000 infections in the medical professions — a higher rate than among people of the same age doing other jobs.

Many of the doctors DW spoke with told of chaos, mismanagement, corruption and a lack of protective measures. "The majority of the masks we use are actually intended for use in construction. It's written on them explicitly: Not for medical use. They filter dust, smoke — but unfortunately they don't protect you from COVID," says Tomescu.

"People on the street are better protected than we are," says a doctor working in another Romanian hospital. Like most of the doctors DW spoke with about the pandemic, he wants to remain anonymous. Many cite the dictatorial style of hospital managers as their reason — they're afraid of repercussions from their superiors, who are often appointed through cronyism and according to political criteria.

The tragedy at the district hospital in Piatra Neamt, a small town in eastern Romania, showed that cronyism and bad management can have fatal consequences. Fifteen patients in an intensive care unit (ICU) died in a fire there in November, with the blaze blamed on an overloaded electrical system. Catalin Denciu, the brave doctor who tried to rescue them from the flames, sustained life-threatening burns and is being treated in a hospital in Belgium.

'Doctors have left the country'

Even before the coronavirus pandemic, the Romanian health care system was chronically underfunded. It receives only between 5% and 6% of Romania's GDP — around half the EU average. The Fundeni Clinical Institute where Dana Tomescu works is one of the best in the country, and a particularly positive example.

With the help of donations, the clinic was able to create capacity to treat the increasingly high numbers of COVID-19 patients by setting up additional intensive care beds, along with the necessary technical equipment, in shipping containers on the hospital grounds. However, as Tomescu points out: "We don't have enough staff."

Another doctor working in Romania made the same point. "When it comes down to it, it's not beds that treat the patients!" she said. "You can set up 7,000 new ICU beds and still not solve the problem, because there aren't enough doctors, nurses or carers to look after these intensive care patients. The doctors have left the country," she says bitterly.

An OECD study from May 2020 shows that one-third of Romanian-trained doctors work abroad. This means that Romania has the highest emigration rate for doctors in the world, followed by Zimbabwe, Belize and the Dominican Republic. According to the German Medical Association, in 2019 the majority of foreign doctors working in Germany were from Romania.

As well as suffering bad working conditions and low wages in comparison to other European countries, Romanian doctors are also having to confront the absurd accusations of COVID deniers in the midst of the pandemic. People at demonstrations shout slogans like "Liar doctors!” and "Down with the doctors' dictatorship!”

"These are people who aren't interested in hearing arguments because they already know it all," says Tomescu. "I'd like to invite the COVID skeptics to pay us a visit so they can see how we work with COVID patients. They should experience what it's like when we lose a patient who dies of a disease we'd never even seen until a short time ago." Perhaps then, she says, these COVID deniers would finally understand "that all they have to do is make a few small gestures as part of their daily life in order not to make a mockery of our work and of the lives of others." Very simple things: like maintaining distance and following hygiene rules.

There are also COVID deniers in the AUR, a party on the far-right of the political spectrum that is about to enter the Romanian parliament for the first time after the December 6 election. Railing against doctors and pandemic restrictions has also become a kind of national sport in Romanian online forums and in the comment sections. The only time Romanians seem to have anything positive to say about their doctors is when they're flown abroad with serious injuries — like the young doctor from Piatra Neamt, who tried to rescue patients from a fire in the ICU.