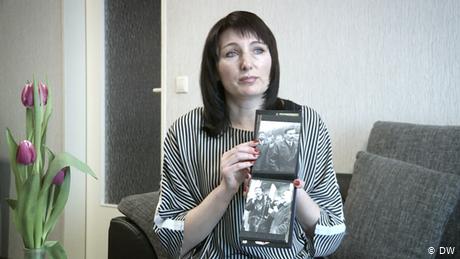 One year ago, DW revealed how opponents of the Belarusian president, Alexander Lukashenko, were kidnapped and murdered at the end of the 1990s. Yuri Garavski, a former soldier with the SOBR special unit, told DW in an exclusive interview how he had assisted in the abduction and murder of prominent Belarusian opposition politicians — including the former interior minister, Yuri Zakharenko.

Shortly after that, on December 18, 2019, the investigation committee of the Republic of Belarus reopened the Zakharenko case. However, it was closed again three months later on the grounds that "the identities of the accused could not be established."

This came as no surprise to Elena Zakharenko, the daughter of the abducted politician. "It's clear to us that the truth about what happened is not going to come to light under the current regime," she said recently, when DW interviewed her at home in the German city of Münster.

Elena's father, Yuri Zakharenko, was among the opponents of the Belarusian ruler Alexander Lukashenko in the late 1990s who tried to prevent him establishing an autocracy. Elected in 1994, Lukashenko went on to extend his powers and authority by means of two disputed referendums. He had the constitution changed to his advantage, and the presidential-parliamentary system of government was transformed into a purely presidential one.

Zakharenko was once a supporter of Lukashenko, and became his interior minister in 1994. But he soon became one of his strongest critics, accusing the president of corruption and the misuse of power. Lukashenko sacked him in 1995, and Zakharenko became one of the leaders of the opposition. His aim was to get Lukashenko, whom he considered a dictator, removed from office. Yuri Zakharenko disappeared without trace in Minsk on May 7, 1999.

Until February 2020, his daughter didn't know what had happened to him. After DW published its report, she decided to contact Yuri Garavski. A meeting took place between them in 2018. Zakharenko was in a state of agitation before the interview. It wasn't easy for her to see the man who claimed to have been involved in her father's murder. "But I had to do it," she said. She wanted to find out whether Garavski had told the truth in his interview with DW. The meeting resolved her doubts.

Elena Zakharenko has lived in Münster for 20 years. She applied for political asylum in Germany in 2000 along with her son, her mother, and her younger sister.

Now 45, Zakharenko has dark hair and pale blue eyes, speaks good German, and works as a saleswoman. In her spare time, she plays the piano and goes to church. She comes across as melancholy and calm, but the sadness of her family history still weighs heavy on her. There are no photos of her father in the apartment. She finds it hard to watch old videos, but shows them to DW nonetheless.

One video shows Elena Zakharenko out for a walk with her 4-year-old son in Münster in 2002. "Where's your grandpa?" asks the cameraman. "He was kidnapped," the boy replies. "By whom?" — "By bandits."

In other sequences, Elena Zakharenko is seen talking to her grandmother, Yuri's mother, who stayed behind in Belarus. "We haven't seen you for two years. Our limited finances mean we can't call you very often. I would so love to see you again." She never did. Yuri Zakharenko's mother died in Belarus in 2018, without ever knowing the truth about her son's disappearance.

Current protests revive memories of the past

Elena Zakharenko is following the ongoing anti-government protests in Belarus on the internet, "with anxiety and hope." Both the anti-Lukashenko slogans and the symbols of the protest movement (the white-red-white flag, for example) are the same today as in the late 1990s, when her father was one of the leaders of the opposition. This doesn't surprise her, because the aim of the protests remains the same: "To liberate the country from the dictatorship." What is new is that, thanks to the internet, information spreads far more quickly than it did 20 years ago. There is also a new, young generation in Belarus oriented toward European democratic values.

The demonstrations in Belarus are being brutally suppressed. Human rights activists say that more than 30,000 people have already been arrested since the start of the mass protests that followed the disputed presidential election of 9 August. The UN has documented hundreds of instances of torture, and the real figure is likely to be much higher. Several people have died — like the 31-year-old artist Roman Bondarenko, who was beaten to death.

"This is happening because the criminals were not brought to justice all those years ago. This impunity has resulted in more victims," says Elena Zakharenko. And whereas in the past the repression was directed against leading politicians, today it is affecting ordinary citizens as well.

She doesn't believe that Alexander Lukashenko will ever leave office of his own accord. She envisages one of two possible scenarios: Either Lukashenko will end up like the former Ukrainian president Viktor Yanukovych, who fled into exile in Russia — or like the former Libyan leader Moammar Gadhafi, who was killed attempting to flee. "If Lukashenko were to walk into a public square without his bodyguards, the people would simply rip him to shreds," she says.

Zakharenko believes that in the past few months it has become clear to many people in Belarus exactly what kind of regime they are living under. This painful realization is one that her family was forced to make 20 years ago.

Of the people currently exposed to police brutality in Belarus, Elena Zakharenko comments: "We are connected through the pain of loss, the hopelessness." What advice does she have for them? "There are possibilities for younger people and the well-educated to realize their potential abroad," she suggests, but adds that it is hard for older people to emigrate.

Zakharenko herself misses Belarus very much. Germany has not become a homeland for her — but it is her home, because her mother and son are here. Now 22, Yuri Zakharenko's grandson hopes to become a policeman. Elena Zakharenko talks to him about the events in Belarus, but says that he lives "in a completely different world."

She would like to go back to Belarus to say goodbye to her father and grandmother. After more than 20 years, the daughter of the missing politician still hasn't been able to put the past behind her. But Elena Zakharenko hopes that this will become possible soon — not only for her, but for her homeland of Belarus as well.