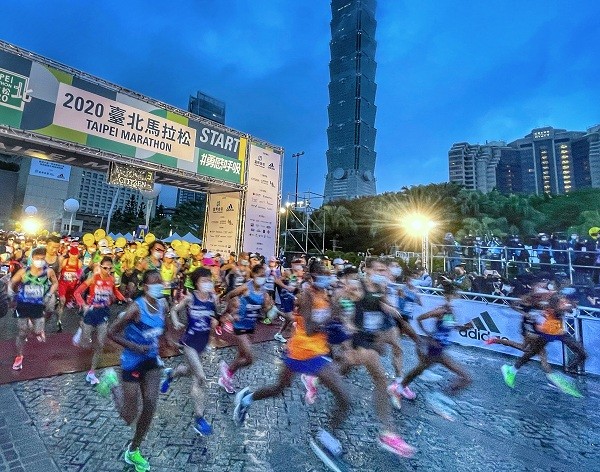 TAIPEI (Taiwan News) — Kenyan runner Paul K. Lonyangata won the 2020 Taipei Marathon men's division on Sunday (Dec. 20) with a time of 2 hours, 9 minutes and 18 seconds; while the female champion, Ethiopian Askale M. Wegi, came in at 2 hours, 28 minutes and 31 seconds, according to a China Times report.

Lonyangata was awarded prize money of NT$1.8 million (US$62,000) for his first-place finish and record-breaking achievement.

The Kenyan champion said this was not the first time to win a road race, but it was the highest prize money he had ever received from a single race. He added that his prize money would help many people in his hometown who have contracted COVID-19, as well as fund schools.

The fastest Taiwanese runner was Chou Ting-ing (周庭印), who finished in 2 hours, 23 minutes and 21 seconds, while Tsao Chun-yu (曹純玉) won the women’s domestic contest with a time of 2 hours, 32 minutes and 41 seconds.

Taipei City Mayor Ko Wen-je (柯文哲) said during an address before the start of the race that about 37,000 runners had registered for the event, but only 28,000 runners were selected by drawing lots, in order to maintain the quality of the event, CNA reported. In the future, 28,000 will become the limit for the number of people participating in the running event, the mayor said.

In order to obtain an IAAF Platinum Label for the event, which has been held every year since 1986, the city government invited 12 elite international athletes to participate in the event, the mayor said. He added that during the quarantine period, they were provided with running machines in their rooms so they could keep training.

The mayor went on to say the Taipei Marathon is likely the only large-scale city marathon to take place this year without a hitch, due to the pandemic, per CNA.