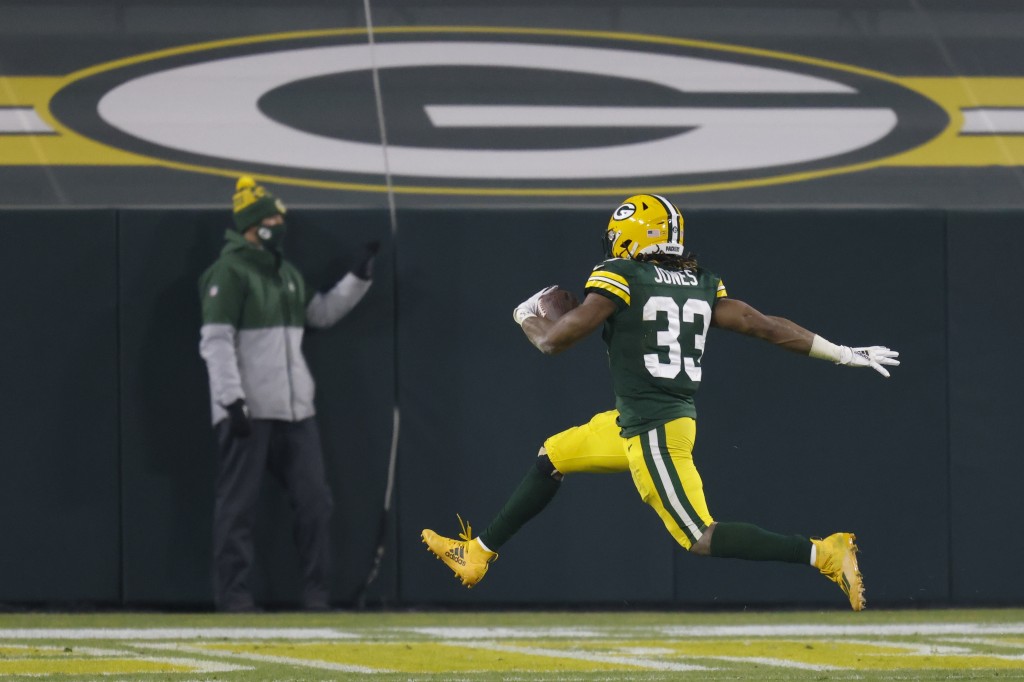 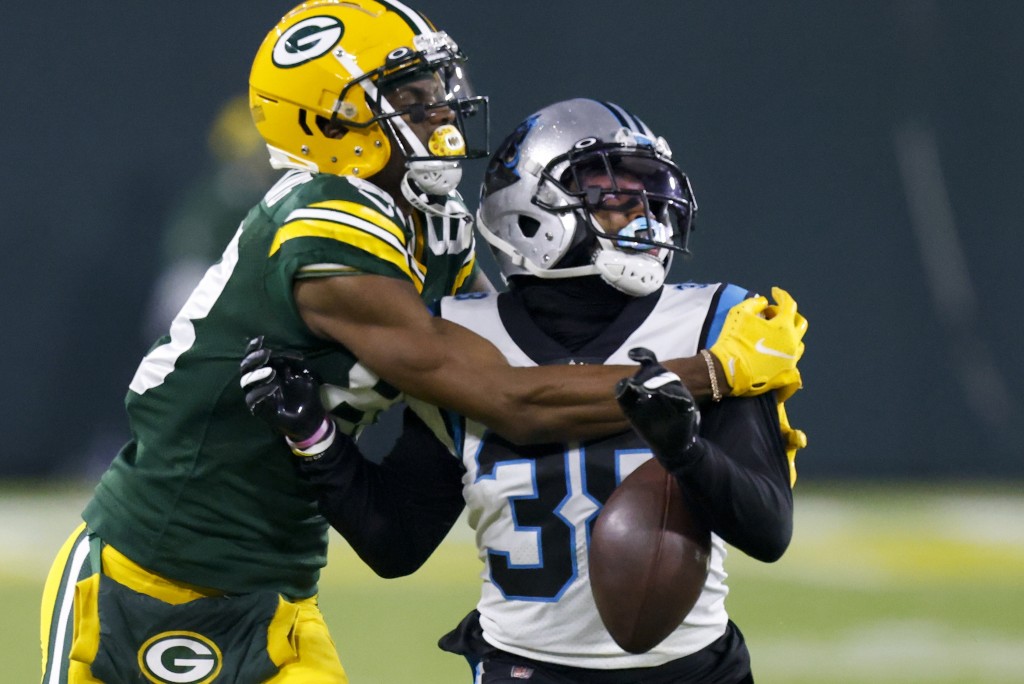 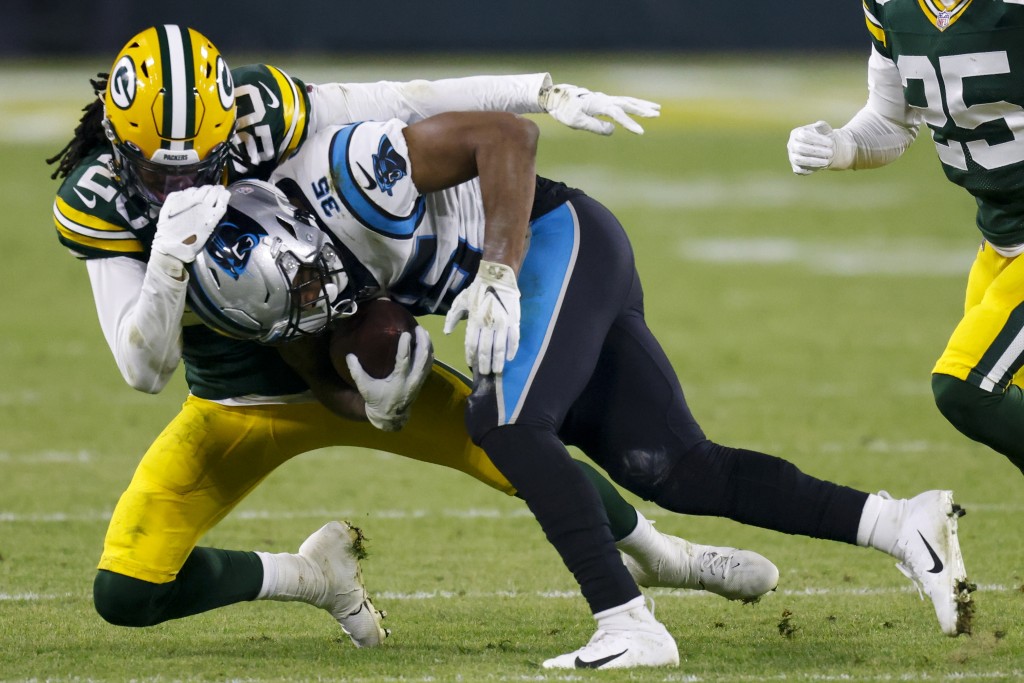 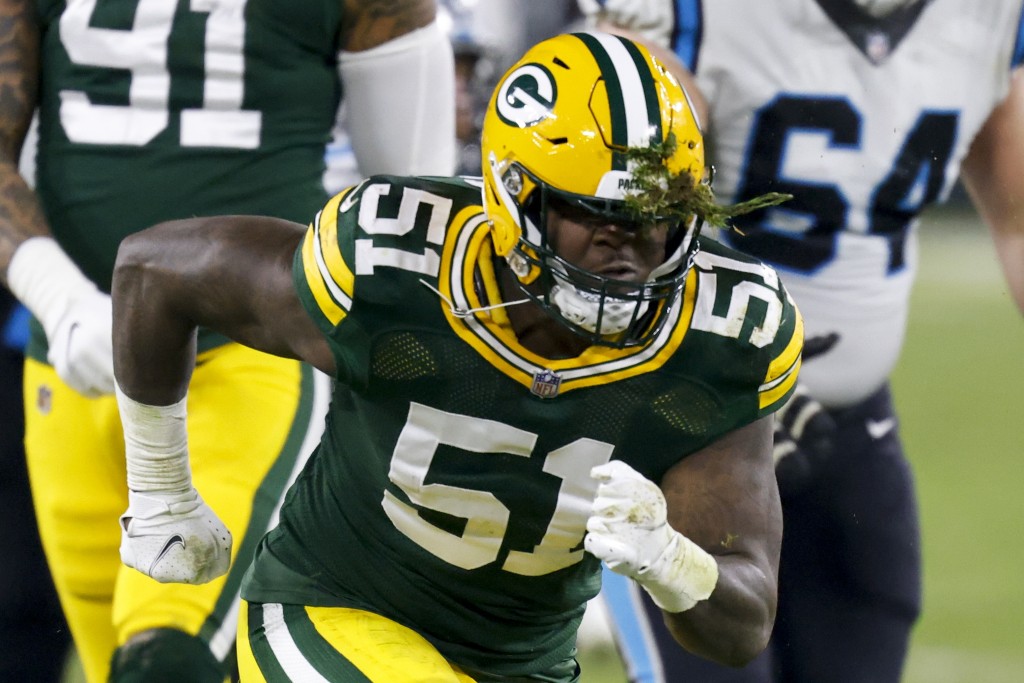 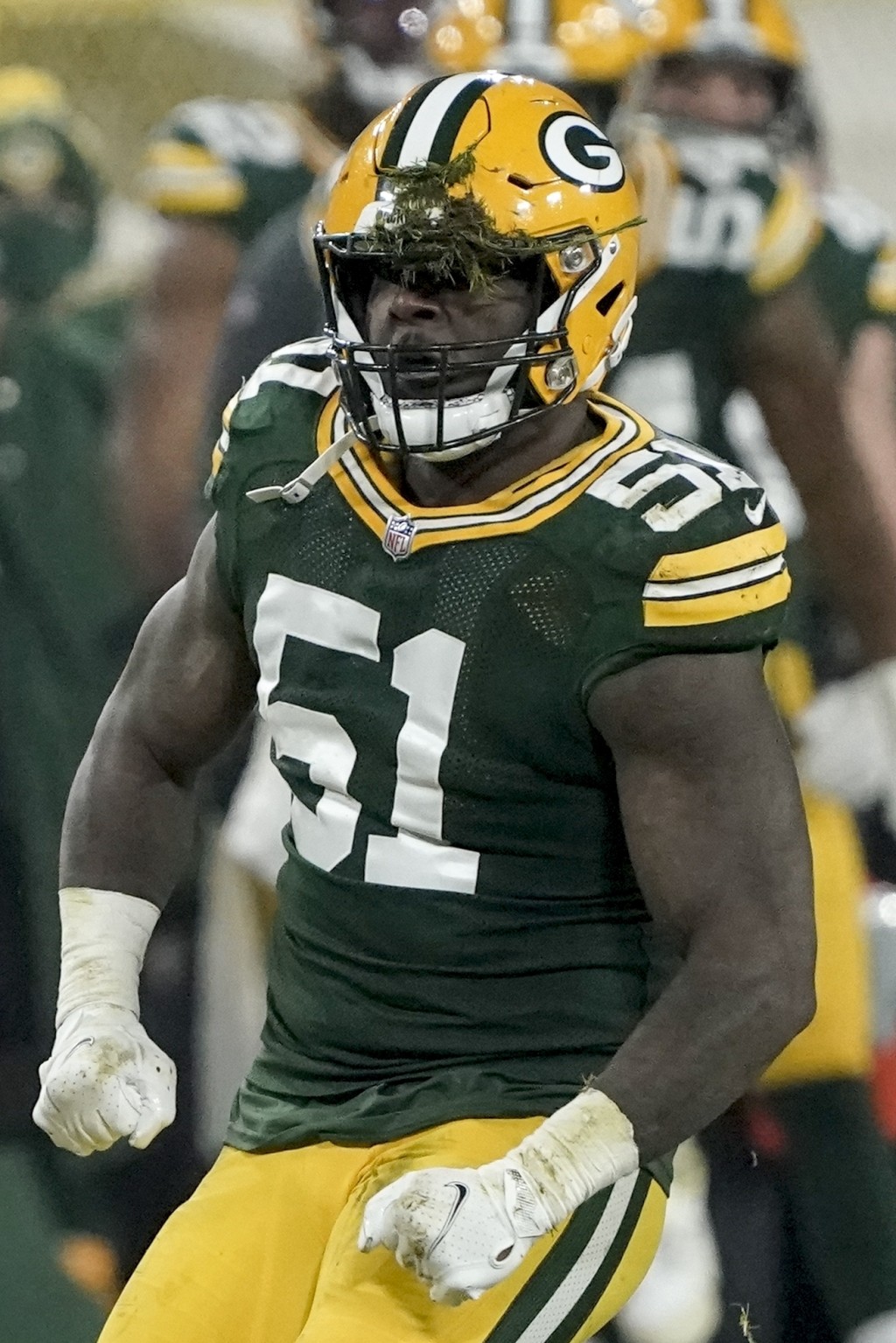 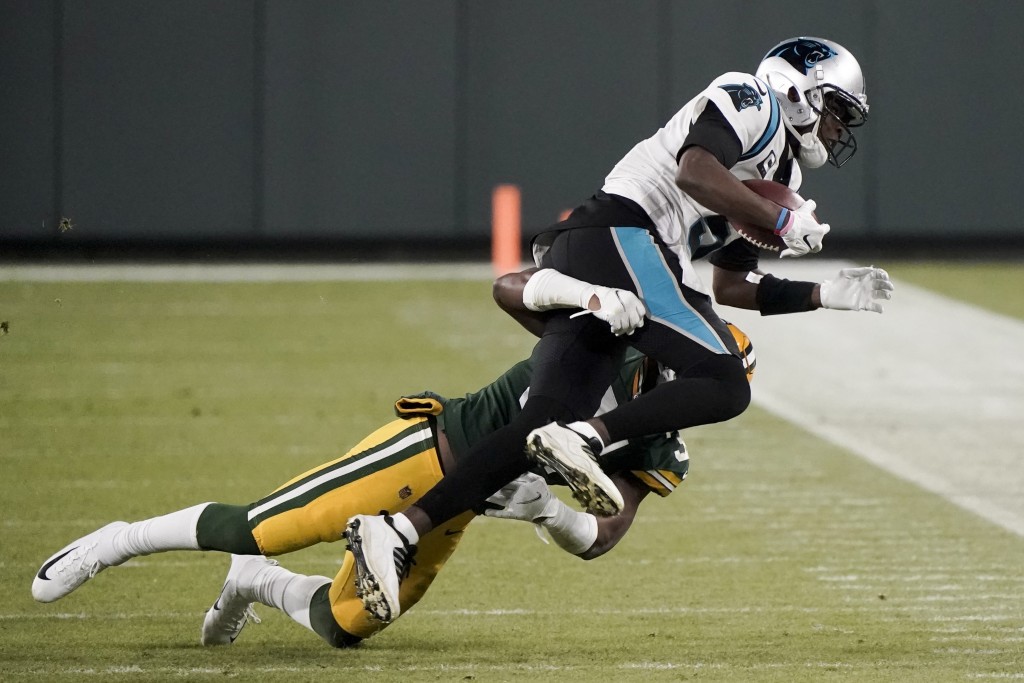 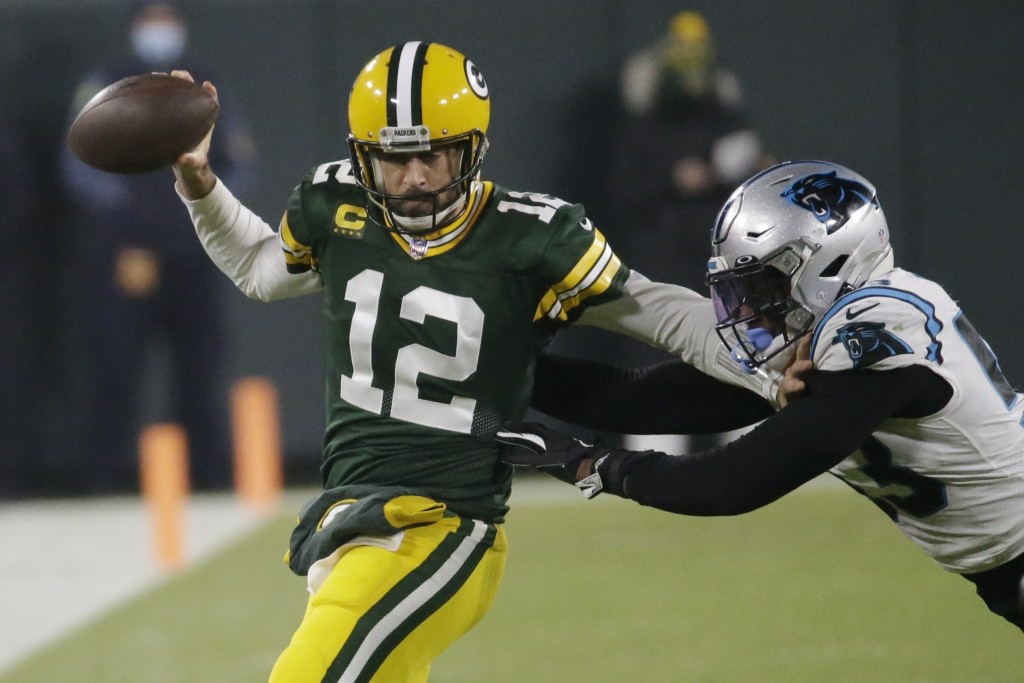 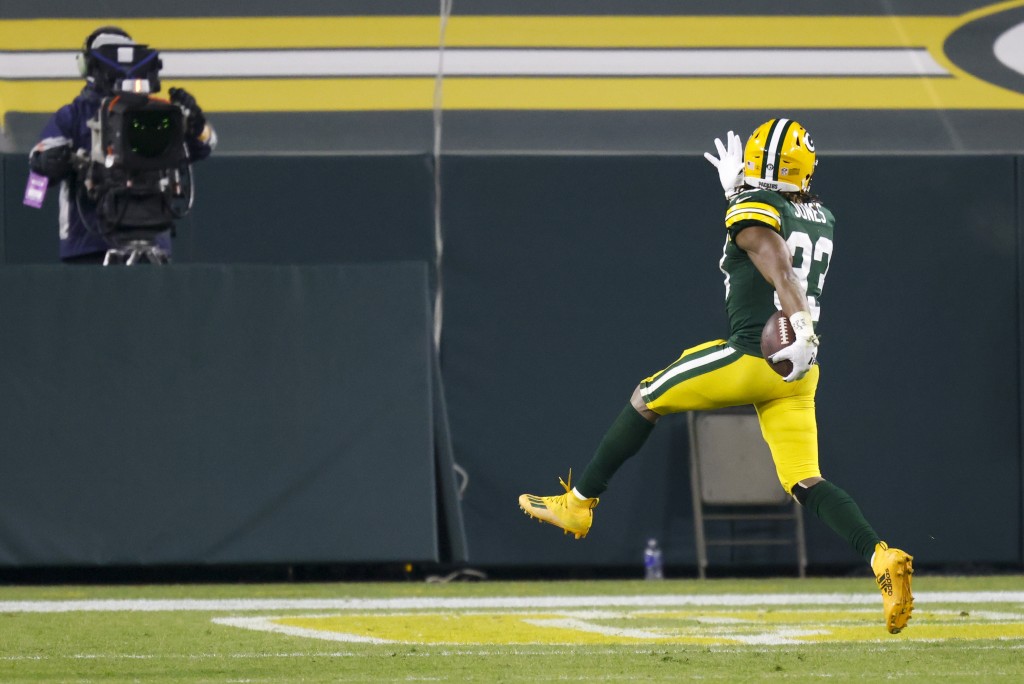 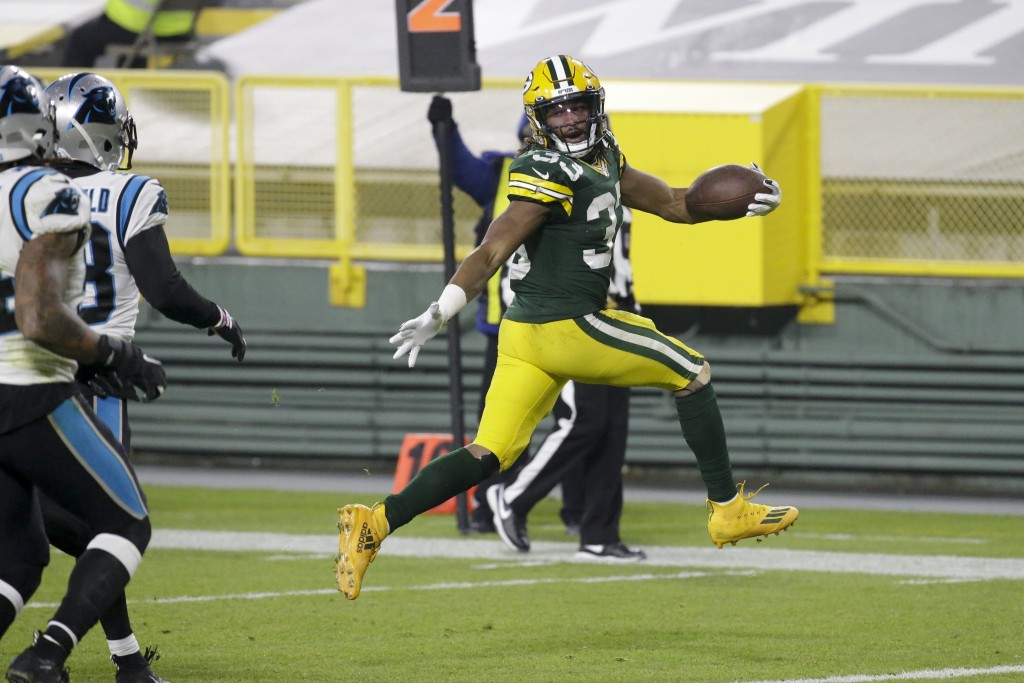 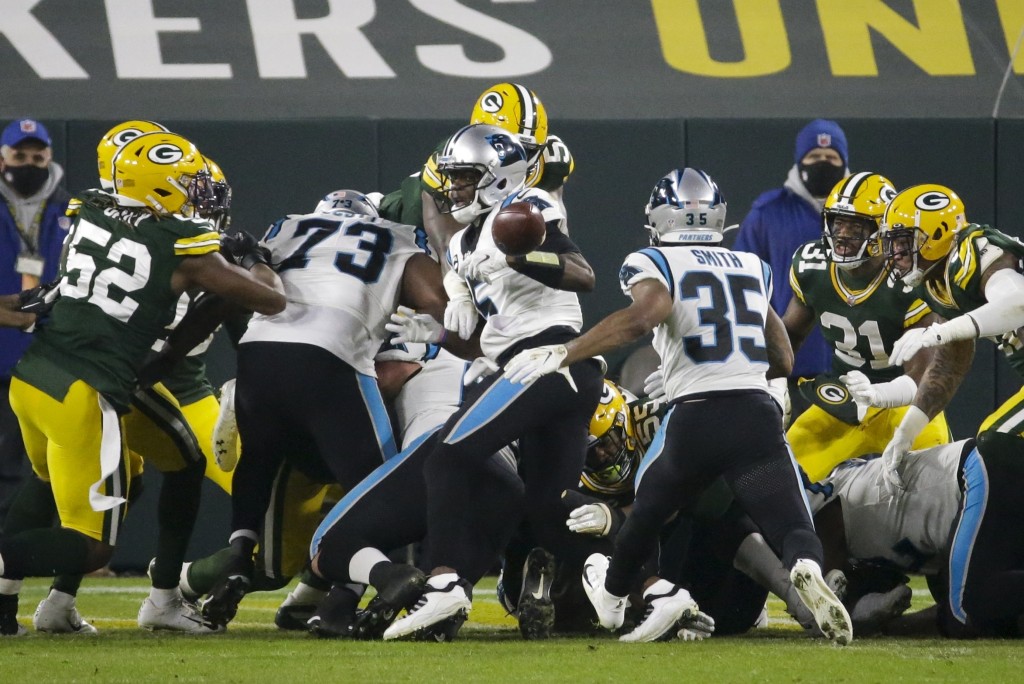 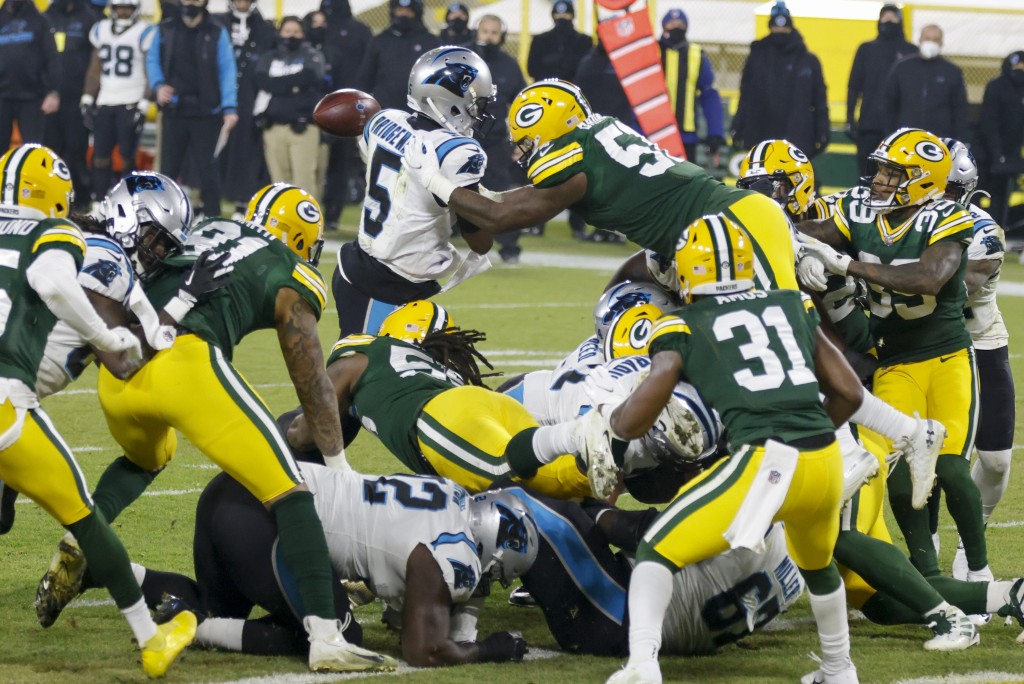 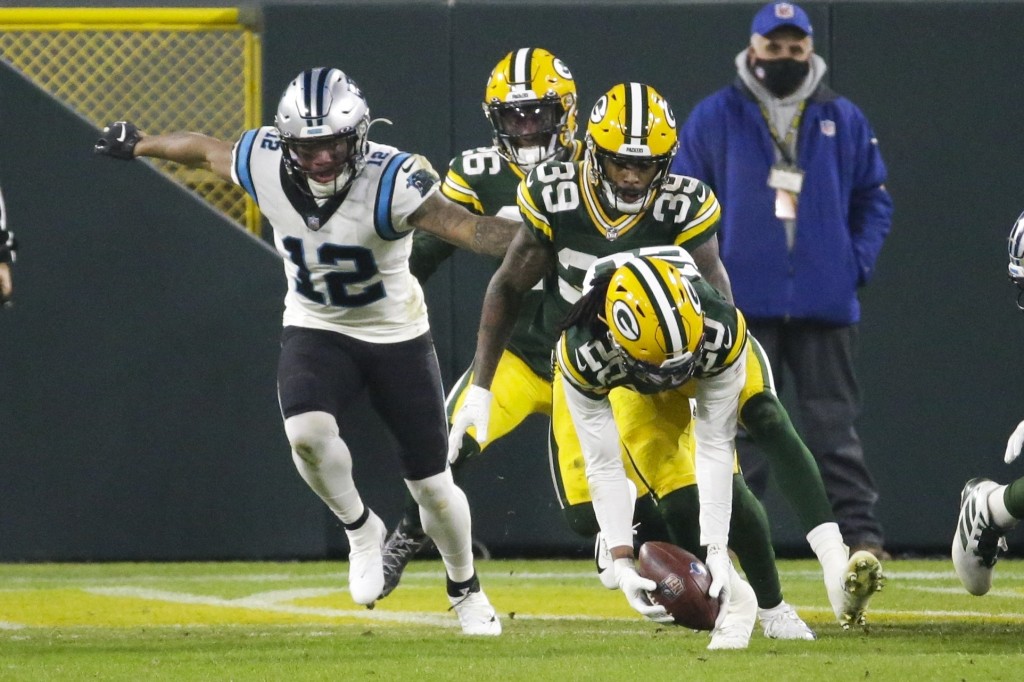 GREEN BAY, Wis. (AP) — Aaron Jones rushed for 145 yards and a touchdown as the Green Bay Packers reached the end zone on their first three series before hanging on to beat the Carolina Panthers 24-16 on Saturday night.

Aaron Rodgers threw for a season-low 143 yards but produced a touchdown pass – his 40th of the season – and a touchdown run for the Packers. Rodgers is the first player in NFL history to throw at least 40 touchdown passes in three separate seasons; he had 45 during his 2011 MVP campaign and 40 in 2016.

Green Bay (11-3) won its fourth straight and took a half-game lead over New Orleans (10-3) in the race for the NFC’s best record. The Packers own a tiebreaker over the Saints after winning 37-30 at New Orleans on Sept. 27.

Under the NFL’s new 14-team playoff format this year, only the No. 1 seed in each conference earns a first-round bye.

The Packers built a 21-3 halftime lead before withstanding a comeback attempt from a gritty Carolina team playing without injured 2019 All-Pro running back Christian McCaffrey and left tackle Russell Okung.

Carolina had a chance to force overtime when it got the ball at its 20-yard line with 55 seconds and no timeouts remaining. But the Panthers only got to the 26 before losing the ball on downs.

The Panthers (4-10) have lost eight of their last nine games.

Carolina's Teddy Bridgewater was 21 of 35 for 258 yards with a touchdown run, but he also had a critical fumble. D.J. Moore caught six passes for 131 yards, and Joey Slye kicked three field goals.

Rodgers capped Green Bay’s first series with a 1-yard pass to tight end Robert Tonyan, who has scored in five consecutive games. After Carolina cut the lead to 7-3 on Slye’s 36-yard field goal, Green Bay reached the end zone again as Rodgers ran it in on third-and-goal from the 6.

Trailing 14-3 in the second quarter, Carolina had first-and-goal at the 1 when Bridgewater tried leaping over the line and Green Bay's Krys Barnes knocked the ball loose. Kevin King recovered the fumble at the 4 and raced 48 yards before Moore brought him down.

Jones capped the Packers’ ensuing drive by high-stepping untouched for an 8-yard touchdown around the left end.

Carolina scored the first 10 points of the second half on Bridgewater’s 13-yard scramble and Slye’s 22-yard field goal. That made it 21-13 with 8:39 left. The Panthers settled for the field goal after John Miller's holding penalty nullified a touchdown.

Mason Crosby gave the Packers some breathing room with a 51-yard field goal with 3:39 left, but the Panthers wouldn't go away. After Bridgewater threw a 40-yard completion to Moore, the Panthers sent their field-goal unit on for Slye's 33-yarder cut the lead to 24-16 with 2:04 left. The strategy didn't work then Green Bay stopped Carolina on its final possession.

Green Bay's Davante Adams had seven catches for 42 yards and didn't reach the end zone, ending his streak of eight games with a touchdown reception.

Only two players in the Super Bowl era have put together longer such streaks within the same season. Jerry Rice caught a touchdown pass in 12 straight games in 1987. A.J. Green did it in nine straight in 2012.

Packers running back Jamaal Williams left with a quadriceps injury in the first half. Barnes left in the third quarter with an eye injury. Outside linebackers Rashan Gary and Za'Darius Smith were shaken up late in the fourth quarter. Safety Will Redmond was evaluated for a concussion.

Carolina is at Washington on Dec. 27.

Green Bay hosts Tennessee in another night game on Dec. 27.