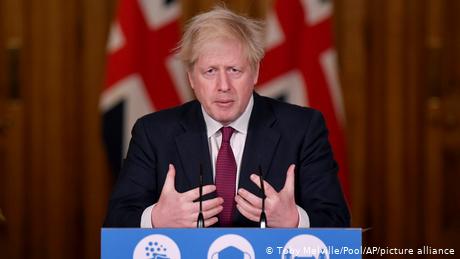 Christmas in parts of the United Kingdom will be much more limited than planned following the discovery of a more infectious COVID-19 strain, British Prime Minister Boris Johnson said Saturday.

"It is with a very heavy heart that I must tell you we cannot continue with Christmas as planned," the prime minister said during a press conference.

The announcement followed the discovery of a new variant of the virus which is much more infectious, prevalent in parts of London and the south of England.

The new strain "may be up to 70% more transmissable" according to early data, Johnson explained, leading him to conclude that "we have to act." In response to the threat, the UK is upgrading it three-tier restrictions system which replaced the nationwide lockdown earlier this month.

What are the new restrictions?

In his statement, Johnson announced a slew of new measures for the UK which will come into effect on Sunday:

The prime minister defended the action saying that "many of our European friends and neighbors are being forced to take similar action."

Johnson assured the country that the new strain is no more lethal, nor is it more resistant to the vaccine, but it has been driving up infections in parts of the country.

Data from the new variety had already been sent to the World Health Organization, but Johnson took the opportunity to point out that the UK was more able than most countries to "identify new strains like this."

The prime minister — who was hospitalized with the virus earlier in the year — also urged people in Britain to take the vaccine when called up, telling them to "join the 350,000 people across the UK who have already had their first dose."