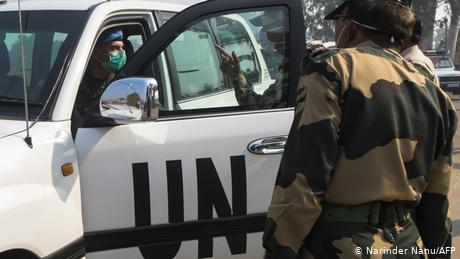 The Pakistani government has called on the Indian Charges d'Affaires to explain the "deliberate targeting" of a UN vehicle in Kashmir, according to an announcement published by Pakistan's foreign ministry on Saturday.

Previously, the Pakistani authorities accused India of shooting at a vehicle which was carrying two UN observers. The observers were traveling through the Pakistani-controlled part of Kashmir to meet with the victims of a prior Indian violation of the ceasefire agreement.

The statement called the attack "unambiguously premeditated" due to the distinctive markings of the UN vehicle.

"It was communicated to the Indian side that the brazen act was a flagrant violation of established international norms and represented a complete disregard for principles enshrined in the United Nations Charter," the official statement read.

The tweet accused the Indian Army of carrying out "unprovoked fire" in the Chirikot sector of the "Line of Control" (LoC) — a de facto border between the two countries which divides up the region of Kashmir.

"Indian troops deliberately targeted a United Nations vehicle with 2 Military Observers on board," the spokesperson added.

Disputed territory behind the tension

Tensions have increased between the two nuclear-armed neighbors in the wake of India's decision to repeal the autonomous status of the part of Kashmir which it controls.

"This year alone, India has committed 2,992 ceasefire violations to date, resulting in 27 deaths and serious injuries to 249 innocent civilians, including 92 women and 68 children," the Pakistani foreign office told press on Friday.

Islamabad and New Delhi have already fought two wars over Kashmir and both claim ownership over the disputed region.

Kashmiri nationalists, who have been seeking independence from both India and Pakistan, fear that moves by the occupying powers to increase control in the region will weaken their cause.