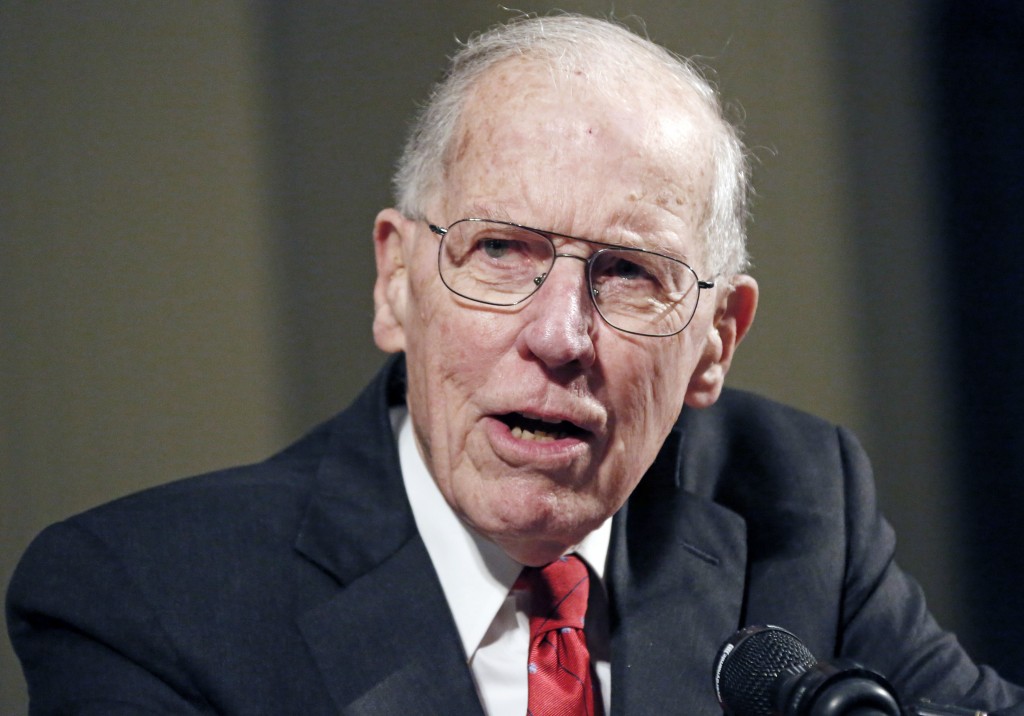 Winter, who was governor from 1980 to 1984, died Friday night at home in Jackson, family spokesman Dick Molpus said Saturday. Molpus is a former Mississippi secretary of state who had worked on Winter’s gubernatorial staff.

As governor, Winter was best known for pushing Mississippi lawmakers to enact the Education Reform Act of 1982, which set rules for compulsory school attendance, established free public kindergartens and set quality standards for schools and teachers in a state that had long struggled with the intertwined problems of poverty, racial strife and poor academic performance.

“I think the combination of personal strength and political openness that he has shown all his life is the key toward making this crazy century we’re living in, with all these moving parts, hold together and make some sense,” Clinton said in a 2015 film, “The Toughest Job: William Winter’s Mississippi.”

The commission held several public forums across the United States, including one that drew a large audience in 1998 at the University of Mississippi. The next year, the William Winter Institute for Racial Reconciliation was founded at the university, continuing the work of trying to help communities divided by conflict.

In 2000 and 2001, Winter led a state commission that recommended removing the Confederate battle emblem from the flag that Mississippi had used since 1894. Voters chose to keep the flag in a 2001 statewide election, rejecting the commission’s assertion that the Confederate symbol was a racist reminder of slavery and segregation.

Momentum changed in 2020 amid nationwide protests over racial injustice. Under pressure from business and religious groups — including, notably, the Southeastern Conference and the Mississippi Baptist Convention — legislators retired the Confederate-themed flag. They ordered a commission to design a new state flag without Confederate imagery and with the phrase, “In God We Trust.”

Winter issued a statement saying he was delighted to see the flag retired. He congratulated legislators but urged them to do more to tackle the state’s economic and social issues.

“The battle for a better Mississippi does not end with the removal of the flag,” he said.

For years, Winter’s law office displayed a painting of a tiny cabin in the woods — the Kincannon School in north Mississippi’s rural Grenada County. The one-room schoolhouse was on land owned by his parents, and it’s where the future governor received his first two years of education. After that, a bus rolled out from Grenada and started taking young William and a few of the other nine white pupils into town for their schooling. Some of the youngsters dropped out rather than travel those 10 miles. Black children walked to a ramshackle country school.

“I saw what a huge difference there was in opportunities which opened up for me by virtue of the fact that I was able to get an education,” Winter said in 2001.

William Winter served in the U.S. Army during World War II and was still a law student when was elected to the state House in 1947.

Winter was appointed state tax collector in 1956, becoming one of the highest-paid public officials in the United States. Rather than hold onto the lucrative job that included collecting Mississippi’s tax on black-market whisky, Winter recommended that the office be abolished — and it was. Winter was elected state treasurer in 1963 and lieutenant governor in 1971. He lost the governor’s race in 1975 and won it in 1979.

During his years as governor, Winter and his wife, Elise, hosted social gatherings for people prominent in politics and the arts, including authors Eudora Welty and Willie Morris and opera soprano Leontyne Price.

In 1982, members of Winter’s gubernatorial staff, known as the “Boys of Spring,” traveled Mississippi to make the case for education reform. The group included Molpus and future Gov. Ray Mabus, who became secretary of the Navy during President Barack Obama’s administration. People were particularly reluctant to require kindergarten, which they saw as government interference. The Education Reform Act passed over the resistance of many legislative leaders during a special session in late 1982.

“I was one person in a huge commitment literally by thousands of people in this state that made up their minds that they were ready to do something about improving education,” Winter said in 2001.

Molpus, who was elected to three terms as secretary of state starting in 1983, praised his former boss in a recent statement. “Winter confronted racial, economic, and educational inequities throughout his life and fought those inequities with courage, hope, and tenacity,” Molpus said.

Mississippi governors were banned from seeking consecutive terms when Winter served. His single term ended in January 1984, and he ran later that year for the U.S. Senate, losing to Republican incumbent Thad Cochran.

Winter remained an advocate of improving education and race relations as a way for Mississippi to pull itself out of poverty.

“We must make the public investments necessary to ensure that all the elements of our educational system — our universities, our community colleges and our public schools — are at least as good as those in our sister states,” Winter said in a 2005 speech. “Some people will tell you that we cannot afford to do that. I will tell you right now: We cannot afford not to do that.”

Winter served for 50 years on the board of the Mississippi Department of Archives and History, and the department’s main building in downtown Jackson is named for him. During a 2003 ceremony dedicating the building, Winter said society must be “instructed by history but not imprisoned by it.”

During the dedication ceremony, historian David Halberstam described Winter as his favorite politician and personal hero.

“I believed for a long time that America would not be whole until Mississippi became part of it, and you more than any other politician are the architect of the new Mississippi and the new America,” Halberstam said.

Winter is survived by his wife of 70 years, Elise Varner Winter; their daughters Anne Winter, Lele Gillespie and Eleanor Winter; and five grandchildren.