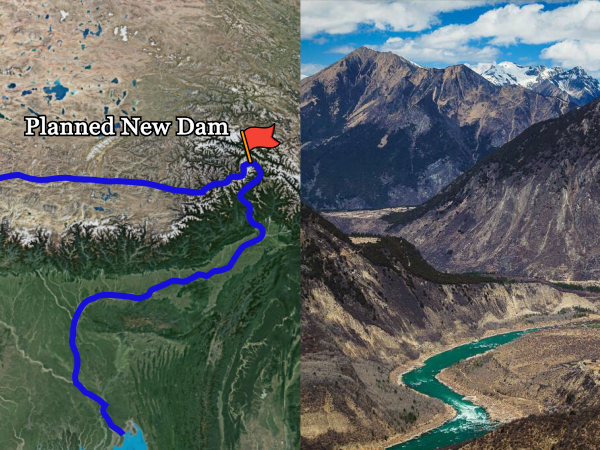 TAIPEI (Taiwan News) — Following China's announcement that it plans to develop hydroelectricity in the lower Yarlung Tsangpo River as part of its 14th Five-Year Plan, India fears the issue will be weaponized by China, amid a border dispute.

The Yarlung Tsangpo is the longest river in Tibet. It enters eastern India, where it is called the Brahmaputra, before flowing into the Indian Ocean through Bangladesh.

The river contains a huge amount of hydropower, especially in its lower section. The 2-kilometer drop at Yarlung Zangbo Grand Canyon can provide almost 70 million kilowatt-hours (kWh) of potential hydroelectricity, an energy scale three times greater than the Three Gorges Dam, according to China5e.

China has previously built hydroelectric power stations on the Yarlung Tsangpo, with the Zangmu Dam generating electricity since November 2014.

A new dam raises concerns in India over the environmental impact and what natural disasters it might cause. India also worries the dam will give China more bargaining chips in its border conflicts, which have exacerbated in recent months in India's Ladakh region.

In response, Ji Rong, an official at the Chinese embassy in New Delhi, responded with a statement saying that “Any project will undergo scientific planning and demonstration with full consideration for the impact on the downstream areas and the interests of both upstream and downstream countries."

However, a previous study has shown that China's dams, up to 11 on the upper Mekong River, have withheld a huge amount of water. This triggered extreme drought downstream while increasing rainfall at the sections where dams are located.

The research pointed out that India has to ensure shared access to trans-boundary rivers and assess how China might weaponize its advantage over those countries downstream.