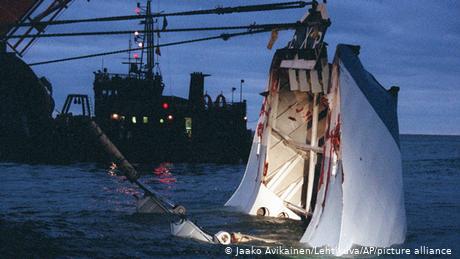 Sweden said Friday it would seek to lift a ban on inspections of the wreck of the Estonia ferry.

The Estonia was on its way from the Estonian capital of Tallinn to Stockholm when it sank in the Baltic Sea in September 1994. With the loss of 852 lives, it was one of the worst maritime disasters of the 20th century.

A 1997 inquiry concluded the disaster was caused by the bow door of the ship being wrenched open in a storm, allowing water to gush into the car deck.

Swedish accident authorities jointly requested the amendment of the diving ban agreed with Estonia and Finland after a documentary showed new footage of damage to the hull.

"The purpose is to find out what the hole is," said John Ahlberk, head of the Swedish Accident Investigation Authority.

Dives down to the site are illegal as the wreck has been designated a final resting place by the governments of Sweden, Estonia and Finland.

In September, a Discovery Network documentary about the disaster included new underwater video images from the wreck site showing two previously unknown holes on the starboard side of the ship's hull.

Experts told the filmmakers that only a massive external force would be strong enough to cause the rupture, causing speculation about what happened to the ship.

According to the head of the Swedish Accident Investigation Authority, John Ahlberk, there is nothing in the new preliminary assessments to call into question the official investigation at this stage.

"We have no plans to rescind the law on protecting the peace of the grave, but we will look into how the law needs to be adapted to do the surveys the accident investigation authority wants to do," Swedish Home Affairs Minister Mikael Damberg told a press conference.

"I am convinced that it is possible to carry out on-site investigations in a responsible manner," Damberg added.

Preliminary work on the amendments that would allow the dive has begun. They could be approved during the first half of 2021.