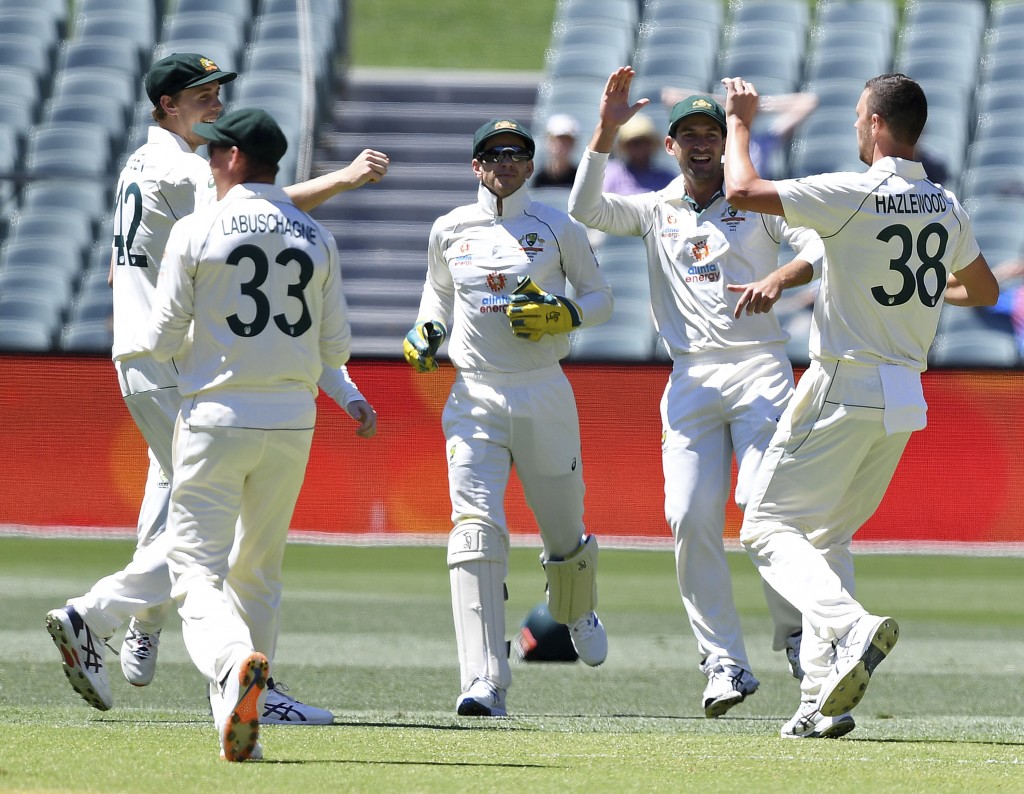 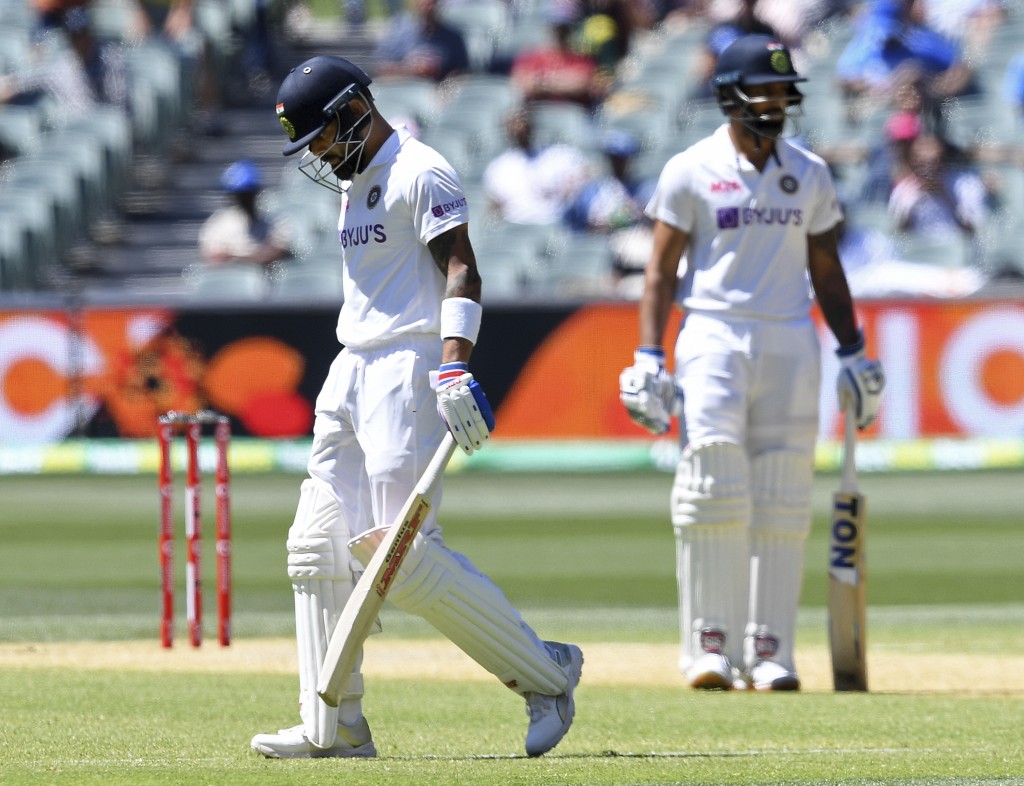 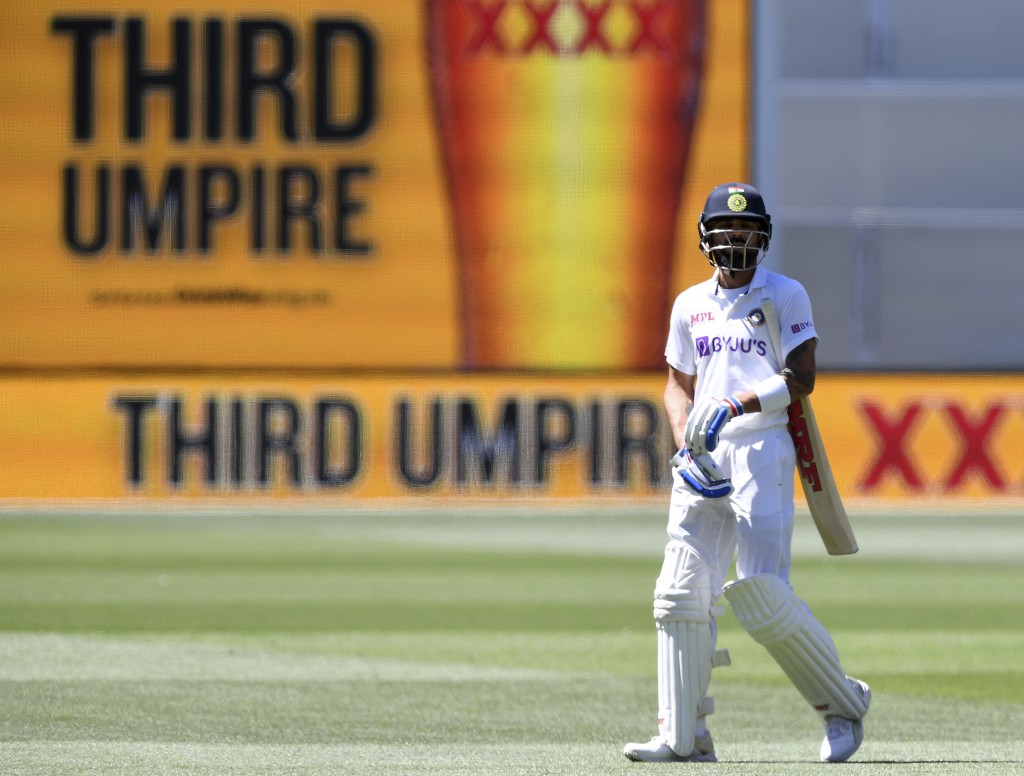 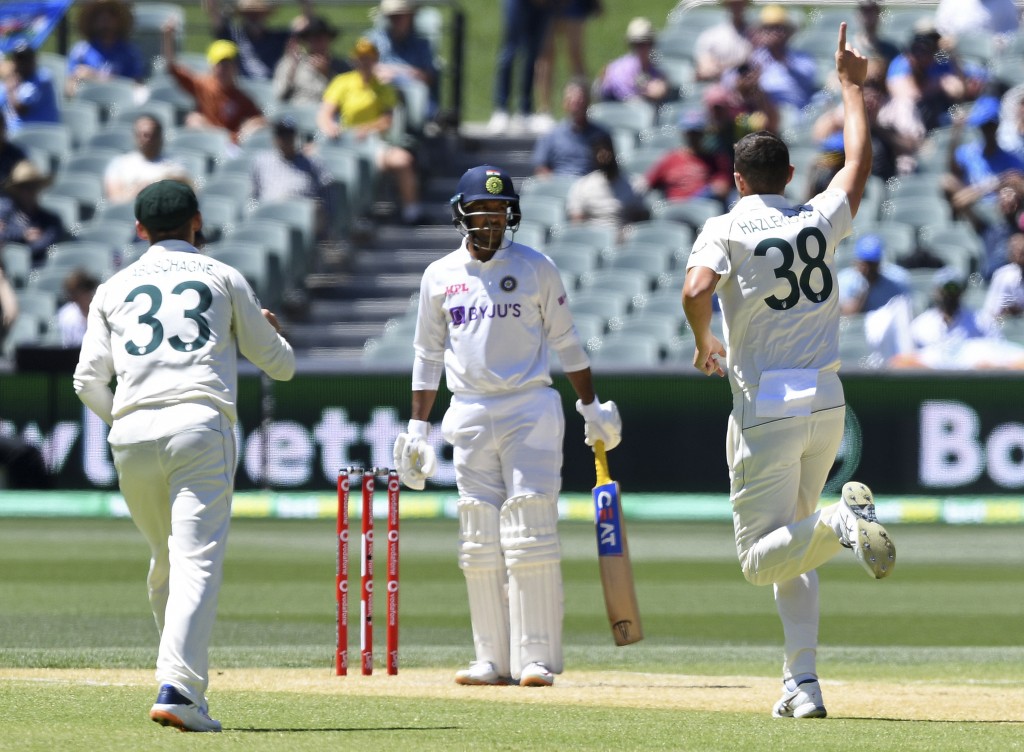 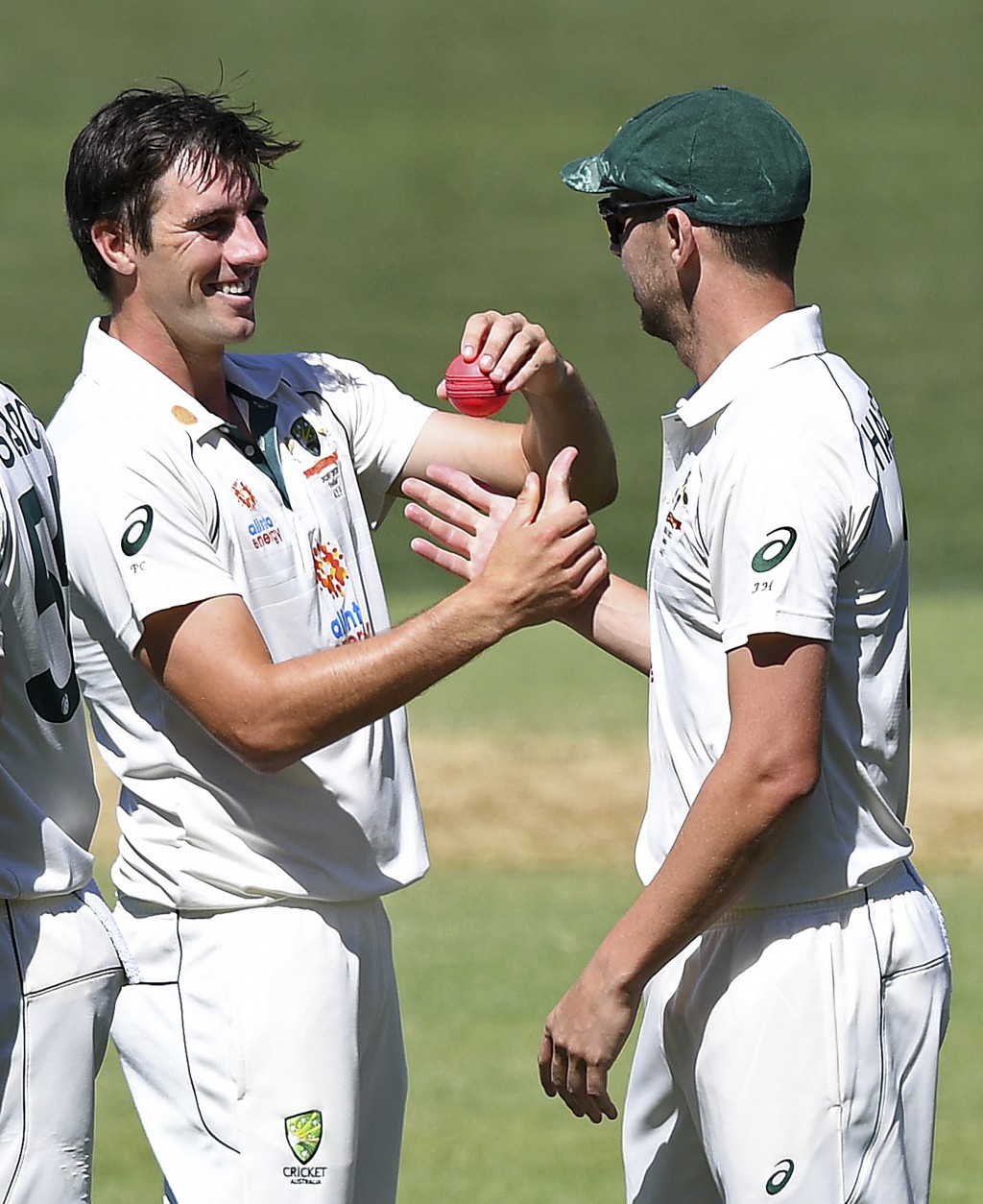 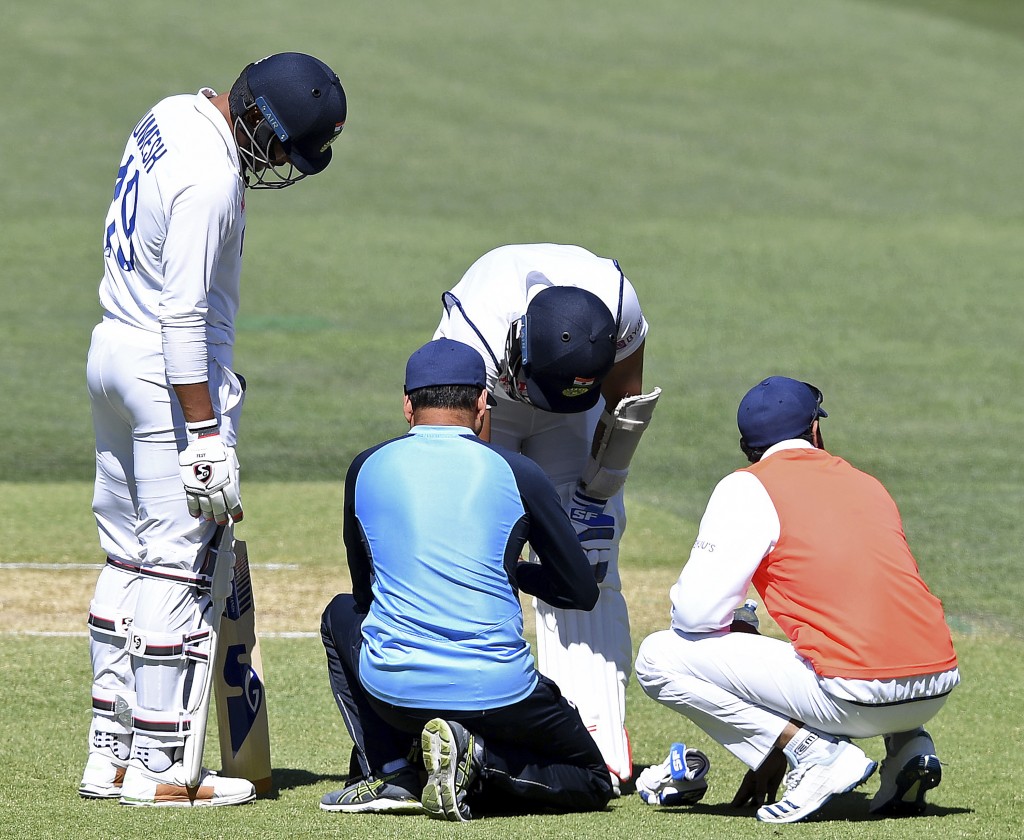 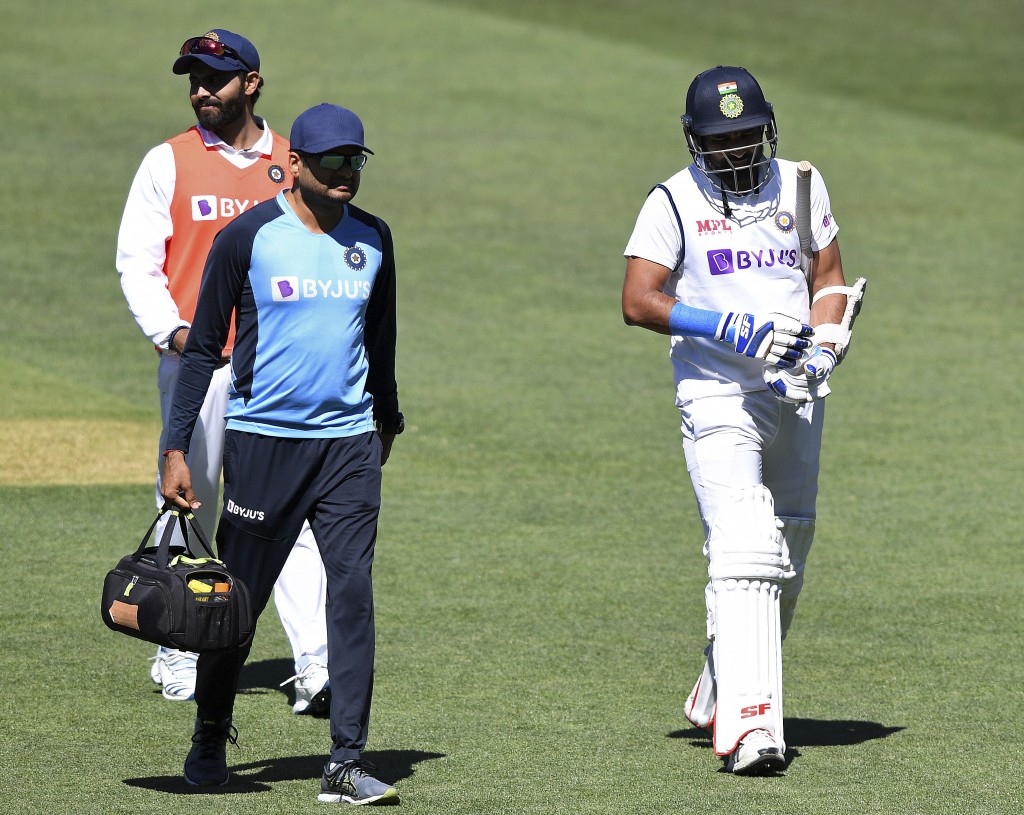 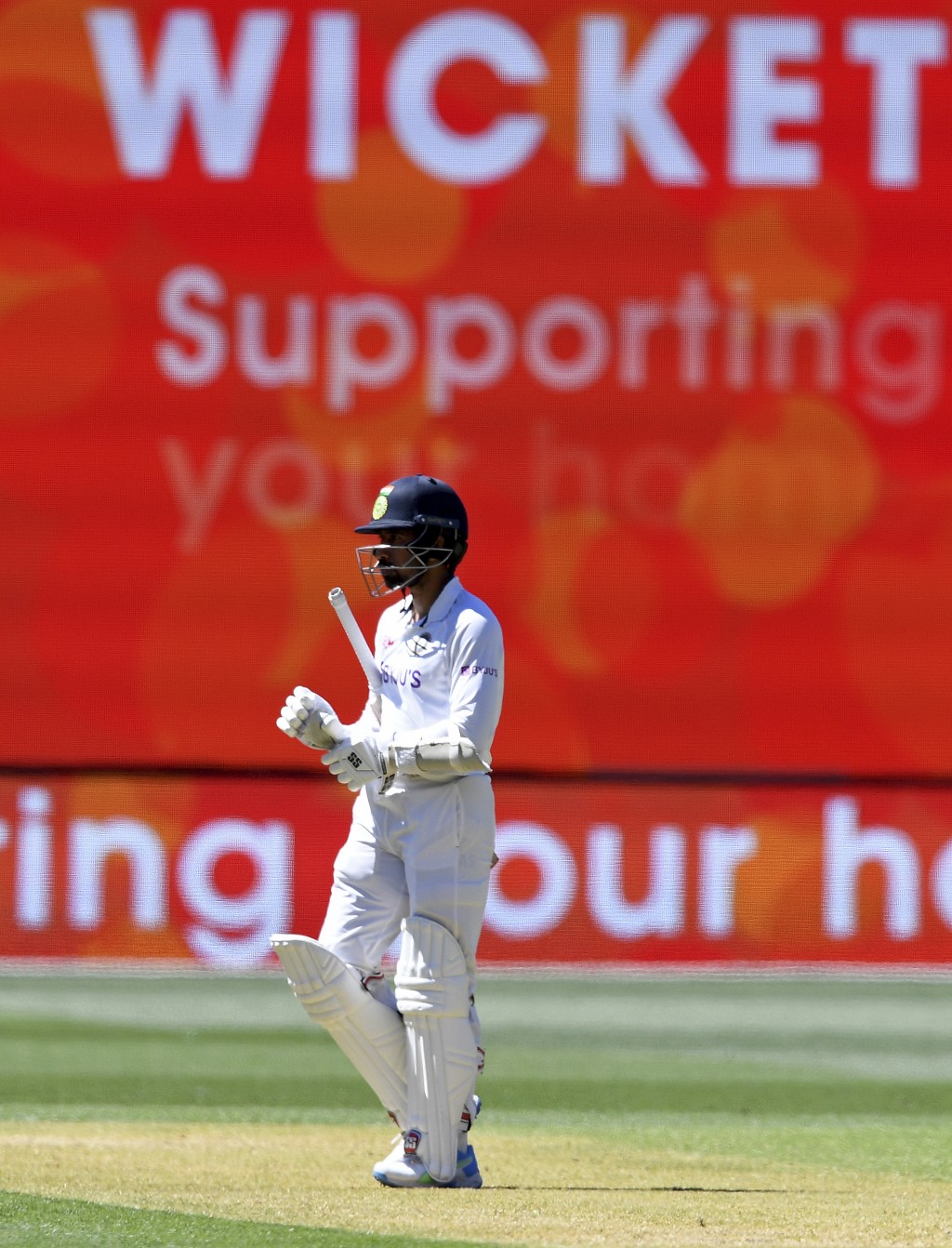 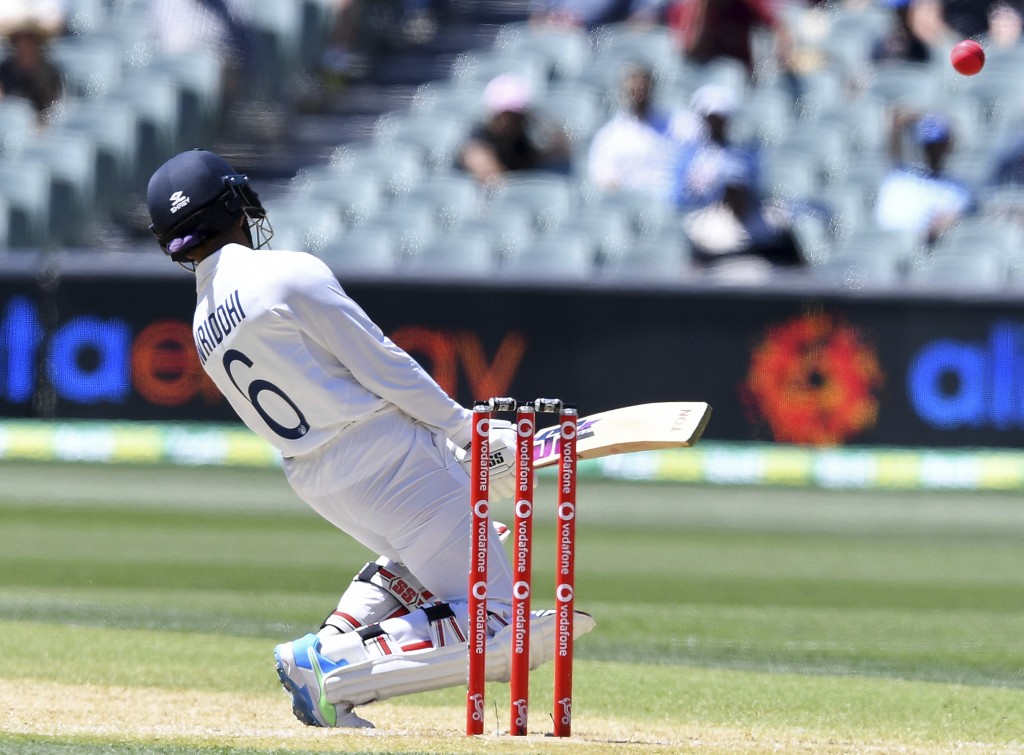 ADELAIDE, Australia (AP) — The relentless pace bowling of Australians Josh Hazlewood and Pat Cummins dismissed India for its lowest-ever score of 36 runs in test matches on an extraordinary third day of the first test at Adelaide Oval on Saturday.

Hazlewood completed 200 wickets in test matches by grabbing 5-8 and Cummins took 4-21 as India lost eight wickets for only 27 runs before No. 11 batsman Muhammad Shami injured his right forearm while facing Cummins and was retired hurt.

India’s previous lowest ever total in a test innings was 42 made against England at Lord’s in 1974.

In reply, Australia was 15 without loss at the dinner break, needing just 75 runs for victory.

“Everything went to plan,”″ Hazlewood said. When asked if he’d ever had a more perfect day of bowling, he replied: “I don't think so.”

India took a first-innings lead of 53 runs after it bowled out Australia for 191 in the first innings.

The extra bounce in the wicket, extracted by Hazlewood and Cummins on Saturday, undid India as none of its batsmen could reach double figures.

Cummins began the Indian slide when he had overnight batsman Jasprit Bumrah caught off his own bowling in the first over of the day and followed it up when Cheteshwar Pujara got a thick edge behind the wicket.

Hazlewood made it 15-5 with his double-wicket maiden first over when he found edges of Mayank Agarwal and Ajinkya Rahane’s bats as India lost four wickets without a run.

Virat Kohli tried to break the shackles with a boundary off Cummins on the off side, before he was caught off the second attempt by Cameron Green off the next ball. Kohli will be leaving after the first test to be with his wife, Anushka Sharma, who is expecting his first child.

Hazlewood bowled another double-wicket maiden and was on a hat-trick when he removed Wriddhiman Saha and Ravichandran Ashwin off successive deliveries before Umesh Yadav averted the hat-trick ball.

Hanuma Vehari guided India passed the ignominy of New Zealand's lowest ever score of 26 runs in a test innings with a boundary off Cummins before Hazlewood completed his five-wicket haul by having the batsman caught behind.