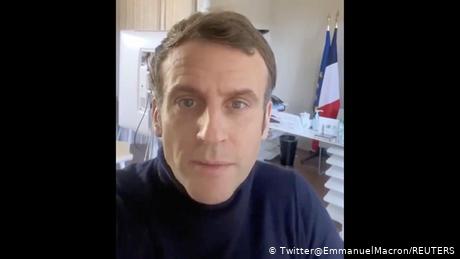 French President Emmanuel Macron on Friday blamed his COVID-19 infection on negligence and bad luck. He also urged people to stay safe as daily new infections in France are once again trending higher ahead of the Christmas holidays.

"I have a message for all of you: Continue to take care of yourselves. The virus can hit anyone. I was well protected and very careful," Macron said in a self-shot video message posted on his Twitter account. "Despite everything, I got the virus. Perhaps it was a moment of carelessness but also maybe bad luck," he said.

Macron left the Elysee Palace in Paris after he tested positive for the coronavirus on Thursday. He has since been working in self-isolation from La Lanterne, the presidential retreat outside the capital in Versailles, a presidential official said.

The president acknowledged that he was working at a slower pace but was doing well and would stay focused on France's response to the coronavirus pandemic and Brexit.

"I am doing well. I have the same symptoms as yesterday: tiredness, headaches, dry cough. Like hundreds of thousands of others of you," Marcon said. "My activity is a little slowed down due to the virus. But I am continuing to take care of the priority issues like the epidemic or, for example, Brexit."

Macron's infection came in the midst of crucial negotiations between the UK and the EU over a post-Brexit trade deal as London is due to exit the single market at the end of the year.

The news of his infection caused alarm across Europe, with EU leaders and French officials Macron met over the last week canceling events and going into self-isolation.

European Council President Charles Michel and Spanish Prime Minister Pedro Sanchez, who attended a conference by the Organization for Economic Co-operation and Development in Paris on Monday alongside Marcon, have gone into isolation.

Macron also attended a dinner at the Elysee Palace with French Prime Minister Jean Castex and dozens of political allies who are all isolating.

Critics have raised questions over the dinner, where the number of guests exceeded the maximum of six recommended by the government to sit at one table.

It is still unclear where Macron could have caught the infection, although officials suspect he could have contracted it at the EU summit in Brussels late last week where leaders had 20 hours of non-stop negotiations.

US President Donald Trump spoke with Macron on Thursday and wished him a quick recovery from the coronavirus, the White House said.

"President Trump also extended his best wishes for a Merry Christmas to President Macron, his family, and the People of France," the statement said.

Trump is among the few world leaders to have contracted the virus. In October, he spent three days in a hospital where he required supplemental oxygen to breathe.