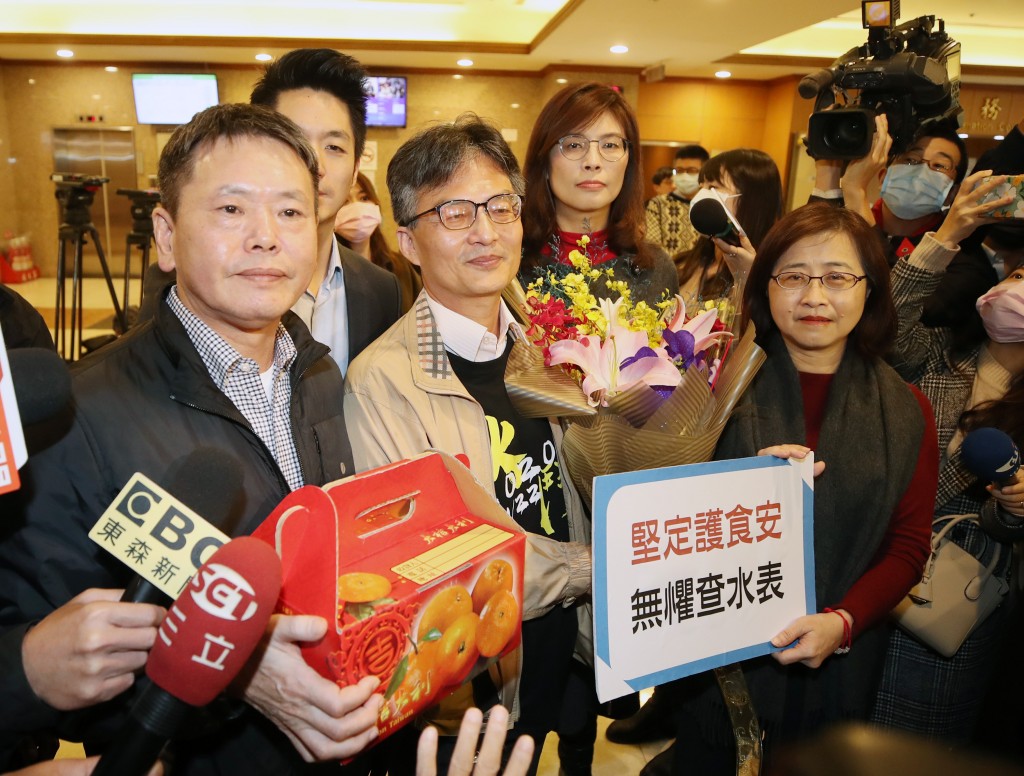 A recent decision by the Ministry of Health and Welfare (MOHW) to report clinical psychiatrist Su Wei-shuo (蘇偉碩) to the police over what the ministry said are "false rumors" about ractopamine has drawn pushback from the doctor and the main opposition party, which criticized the move as violating Su's freedom of speech.

At a Thursday (Dec. 17) press conference, Wang Yu-min (王育敏), chairwoman of the opposition Kuomintang's (KMT's) Culture and Communications Committee, said the KMT supports Su, and she accused the government of violating the Constitution by suppressing freedom of speech.

The matter of ractopamine residue in pork is a public issue and people have the right to express views that are contrary to those of the government, she said. The controversy began when Su, a former psychiatrist at Kaohsiung Veterans General Hospital's Tainan Branch, received notice from the Kaohsiung Police Department's Sanmin Second Precinct to report to the precinct on Dec. 25 with information about the impact on human health of meat containing the controversial animal feed additive ractopamine.

The 51-year-old doctor was given the notice after the MOHW reported him to the police on Oct. 28, accusing him of spreading false rumors about food safety. On Wednesday (Dec. 16), MOHW Deputy Minister Hsueh Jui-yuan (薛瑞元) told reporters that Su had repeatedly spread false rumors about ractopamine, including that it causes autism and can be found in the air and soil.

Su's comments on ractopamine were most likely in contravention of Article 46-1 of the Act Governing Food Safety and Sanitation, Hsueh said. The act states that a person who disseminates a rumor or incorrect information concerning food safety and thus causes damage to the public or others shall be sentenced to up to three years in prison, or fined up to NT$1 million (US$34,819).

Noting that beef with ractopamine residue has been available in Taiwan for many years, Hsueh said that spreading such rumors without evidence will cause public panic and damage the reputation of importers. While the police notice is not binding, Su said Thursday the MOHW's decision to report him could create a chilling effect.

Su said when he reports to the police on Dec. 25, he will bring evidence he has collected on the subject, which he has given to the MOHW before, as well as pictures of the DPP beef protest. Even if he is charged, he said, it will not make ractopamine any less "toxic."

The MOHW should ensure that people have peace of mind over what they eat and the U.S. should stop pressuring Taiwan over the issue, he said. In media interviews and on his Facebook page since September, Su has repeatedly stated his opposition toward President Tsai Ing-wen's (蔡英文) decision to allow imports of pork from the U.S. that contain ractopamine.

The policy will take effect on Jan. 1 next year and has sparked heated debate in Taiwan over the safety of the livestock drug, even though beef that contains ractopamine has been sold in Taiwan since 2012. Tsai's decision is considered to be an effort to meet the prerequisites for negotiations on a bilateral free trade agreement with the U.S., which had long labeled Taiwan's restrictions on meat imports as a trade barrier.

Ractopamine, a controversial veterinary drug that makes animals leaner before slaughter, is currently banned for use in pigs in Taiwan as well as in the European Union and China because of concerns over its safety to both animals and humans. In an interview in October, Su said that the asthma drug terbutaline, which he described as a "cousin of ractopamine," might cause pregnant women to give birth to autistic children.

Terbutaline has been found to cause damage in the brains of mice embryo and young mice, he went on, adding that when human children are developing, they can be affected by "these kinds of drugs," which can lead to autism and affect their cognitive development.

"If we let this enter our food chain," Su continued, without specifying to which food he was referring, "and pregnant women accidentally eat it, then our next generation could be affected by these drugs before they are even born. This would lead to a genetic change in all Taiwanese people, as ractopamine can change gene expression."

People might say we can gain short-term benefits when we open our borders on Jan. 1 next year, Su said, "but the price we will pay is the long-term physical and mental health, even the cognitive development, of our next generation."

"This is why I think that if there is a risk, we have to evaluate it carefully," he said.

In the same interview, Su also said that according to "many European studies, if ractopamine is allowed into a country, then the eco-system in that country will have ractopamine, even in the air."

In a show of support for the health ministry's decision to report Su to the police, Executive Yuan Secretary-General and spokesman Li Meng-yen (李孟諺) said Thursday that freedom of speech does not give the freedom to spread rumors and that one must speak on the basis of facts.

Su's claims that one can inhale ractopamine, that the drug can cause autism and that its toxicity is 250 times that of the drug MDMA, more commonly known as ecstasy, are very exaggerated, Li said. Such comments could also harm people with autism, he said, adding that the Executive Yuan respects the MOHW's decision and the judicial process.

MOHW Minister Chen Shih-chung (陳時中) was also asked about Su's case Thursday, to which he replied that if the MOHW believes there might have been a violation of the law, it will refer the case to prosecutors and await the decision of the judiciary.

If others are also found to have violated the law, they will also be subject to the same process, Chen said.
Sanmin Second Precinct said Thursday that while they were initially in charge of the case, it has now been referred to prosecutors.