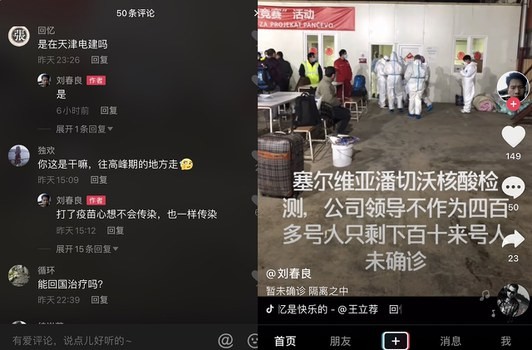 TAIPEI (Taiwan News) — Reports surfaced Tuesday (Dec. 15) that more than 300 workers at state-run firms in Angola and Serbia have been diagnosed with the Wuhan coronavirus despite being vaccinated with China's vaunted vaccines.

On Dec. 7, news broke that 47 Chinese construction workers were confirmed as having COVID-19 despite being vaccinated with one of China's home-grown vaccines. China's state-run mouthpiece the Global Times was quick to dismiss the report by citing anonymous sources who claimed the workers had not been vaccinated.

However, on Tuesday (Dec. 15), Radio Free Asia (RFA) reported that many Chinese construction workers in Angola and Serbia have tested positive for COVID. The news service cited sources who claim the workers were all inoculated with vaccines produced by China's Sinopharm Group prior to leaving the communist country.

RFA cited a Chinese-language reporter surnamed Zhang (張) as saying that on Dec. 11, at least 17 Chinese nationals tested positive for the virus in Angola, and 16 were employees of a Chinese state-owned enterprise in Lunda Norte Province. Zhang claimed that all of those infected had been inoculated by the vaccine produced by Sinopharm before they left China.

The news agency contacted a Chinese woman in Angola surnamed You (尤), who said reports of the confirmed cases and prior inoculations were true, but the numbers are just the "tip of the iceberg." She said that many of the Chinese citizens who have been infected live in squalid conditions and because they are discriminated against by their compatriots, their situation is even worse.

You said that generally speaking, Chinese dispatched to the country have been given the vaccine and claimed direct knowledge of several people who had been vaccinated but still came down with the virus in Angola. She said the infected employees dare not say anything or report their infections.

She alleged that when the workers go to local, Chinese-funded hospitals for COVID treatment, they refuse to admit them. When they try to contact the China-supported Angolan medical teams for aid, they do not offer any practical help other than some verbal advice.

As for the Chinese embassy in Angola, its current stance on the incident is that the parties involved did not strictly abide by the vaccination regulations and procedures, resulting in improper application of the vaccine. The embassy did not comment on questions raised about the effectiveness of the vaccine when properly administered.

Over 300 Chinese workers infected in Serbia

In early December, reports surfaced from Serbia that 300 out of 400 Chinese workers at the Tianjin Electric Power Construction Co., Ltd. (TEPC) project in Pancevo tested positive for COVID. According to RFA, this included a large number of Chinese employees who had been inoculated with the Sinopharm vaccine — but still became infected with the virus.

TEPC has not responded to requests for comment. Its corporate website and many web pages related to the company's project in Serbia have been deleted since a large number of infections were reported. TEPC is part of China Energy Engineering Group Co., Ltd, which is headquartered in Beijing.

However, the head of Binzhou Labor Services (濱州勞務) surnamed Li (李), who recruited laborers for the project, confirmed that prior to being transported overseas all workers working for TEPC must be vaccinated. Li insisted the client company requires all workers to be vaccinated before they go abroad.

Another labor staffing firm, Bolong Labor Services (博龍勞務), which also recruited employees for TEPC, confirmed that since June, employees at state-owned enterprises who have been recruited in China must be vaccinated before going abroad. The agency stated that before leaving, workers are told to meet at a specified location where they will receive one injection of China's domestically-made COVID vaccine.

Sinopharm has thus far refused to respond to requests for comment. RFA was not able to contact the Chinese laborers who have been diagnosed in Angola and Serbia to confirm directly if they were vaccinated.