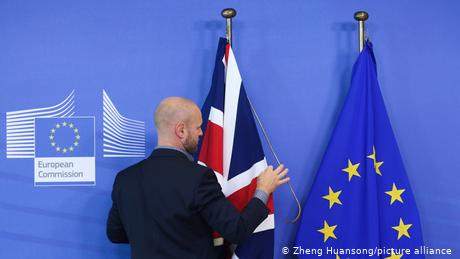 Leaders from Britain and the European Commission did not take an overly optimistic tone following talks late Thursday over a trade deal that would keep the UK from crashing out of a transition period with the EU without a deal in place.

President of the European Commission Ursula von der Leyen said "substantial progress" had been made on several issues, but fishing rights remained a point of contention. At the same time, British Prime Minister Boris Johnson warned that a no-deal outcome was becoming "very likely."

"We welcomed substantial progress on many issues. Yet big differences remain to be bridged, in particular on fisheries. Bridging them will be very challenging," von der Leyen said following Thursday’s talks, adding that negotiations will continue on Friday.

With just days to go before the end-of-year deadline, Downing Street opted for a more pessimistic tone.

"The prime minister repeated that little time was left," a spokesman for the British PM said. "He said that, if no agreement could be reached, the UK and the EU would part as friends, with the UK trading with the EU on Australian-style terms."

Australia doesn’t have a free trade deal with the bloc.

A ‘no deal’ scenario

The UK officially left the EU on January 31, 2020, but trade and other sectors remain within the bloc's structures until the year ends. If this deadline lapses, trade between the EU and UK will fall back on rules and tariffs established by the World Trade Organization in 1995.

The UK will have to start paying tariffs on imports from the EU, and vice versa.

Negotiators on both sides have been involved in prolonged discussions to reach common ground in terms of a trade deal before the December 31 deadline. However, three main areas of concern remain.

The first main area of concern, where the UK and EU are attempting to bridge big differences, is EU nations' access to UK fishing waters. Von der Leyen has warned that overcoming gaps on this issue "will be very challenging."

The governance of any deal that is reached, in terms of differences over legal oversight, has proved to be the other main bone of contention.

Finally, talks on a deal have so far failed largely because of the UK's insistence that it should trade with the bloc with as few restraints as possible and the EU's stance that Britain must stick to EU rules to ensure fair competition.

The UK claims that the EU intends to subvert Britain's status as an independent and sovereign nation by forcing it to obey the bloc's rules. The EU, in turn, fears that Britain could drastically lower its social and environmental standards while subsidizing UK industry with state money, thus creating a low-regulation economic rival hovering at its margins.