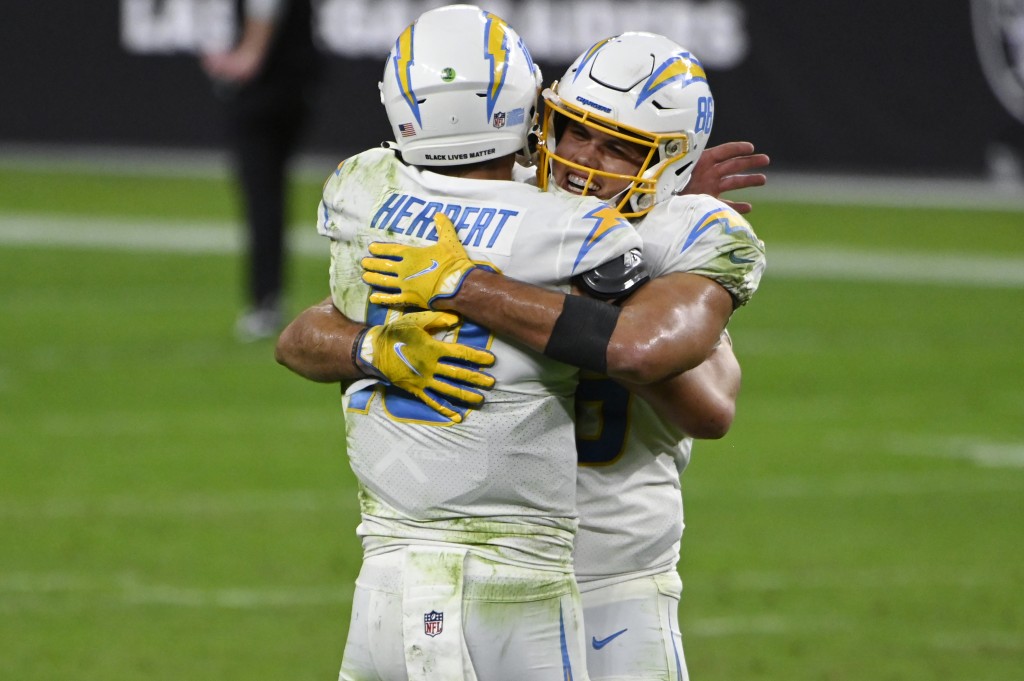 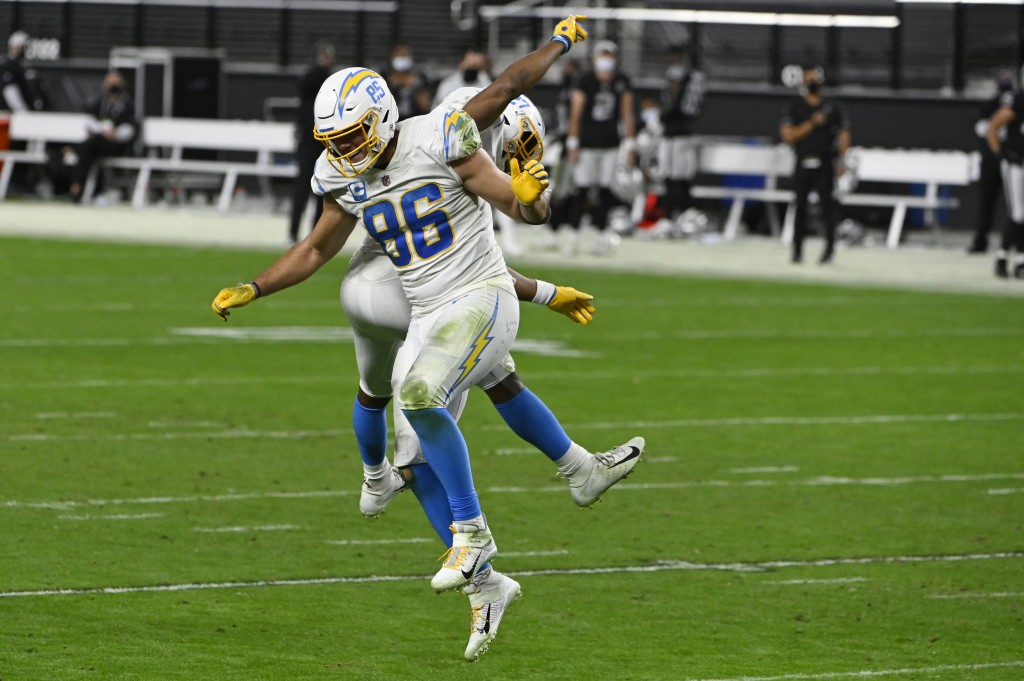 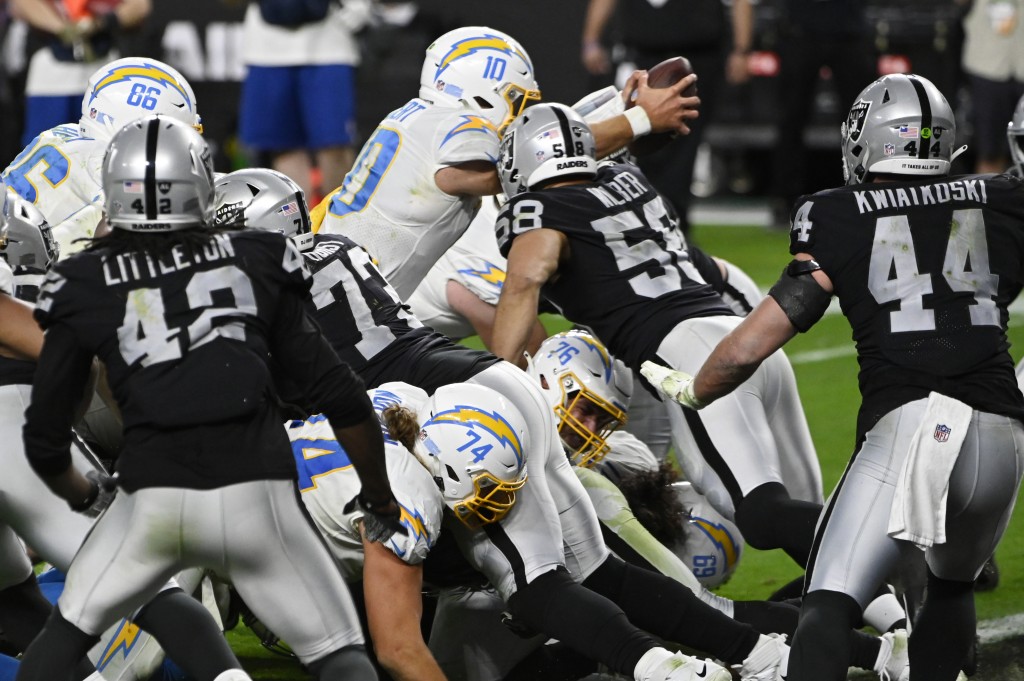 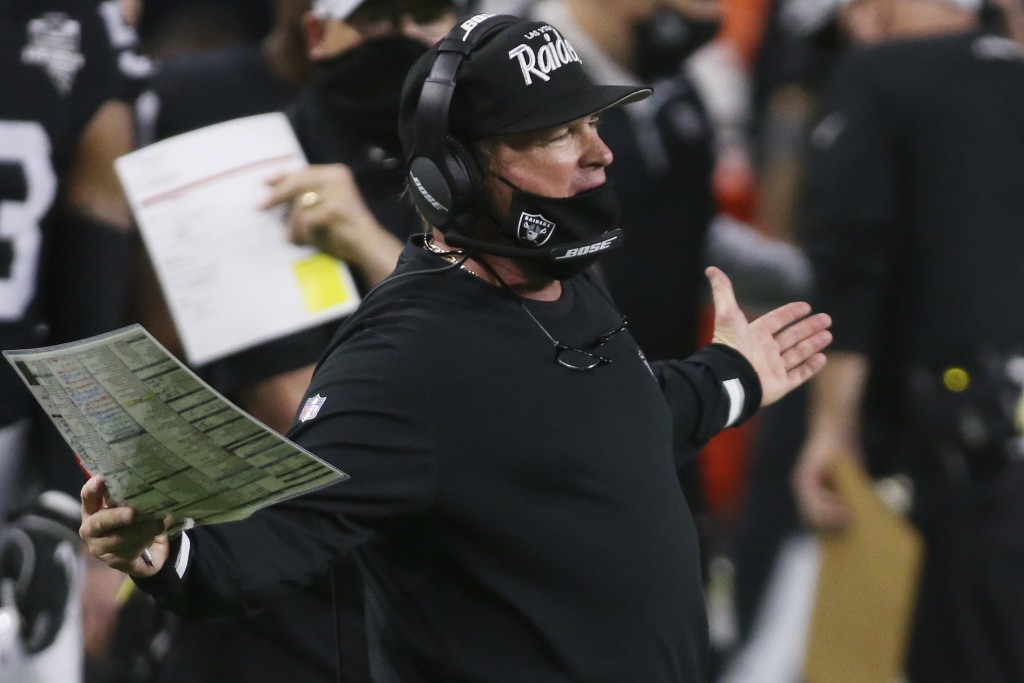 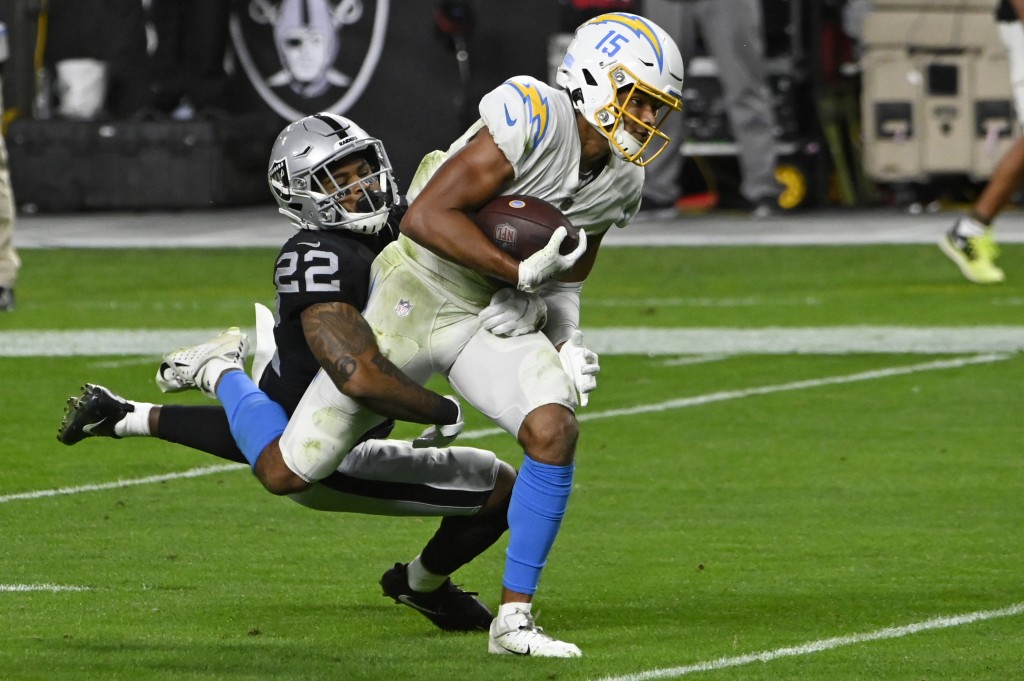 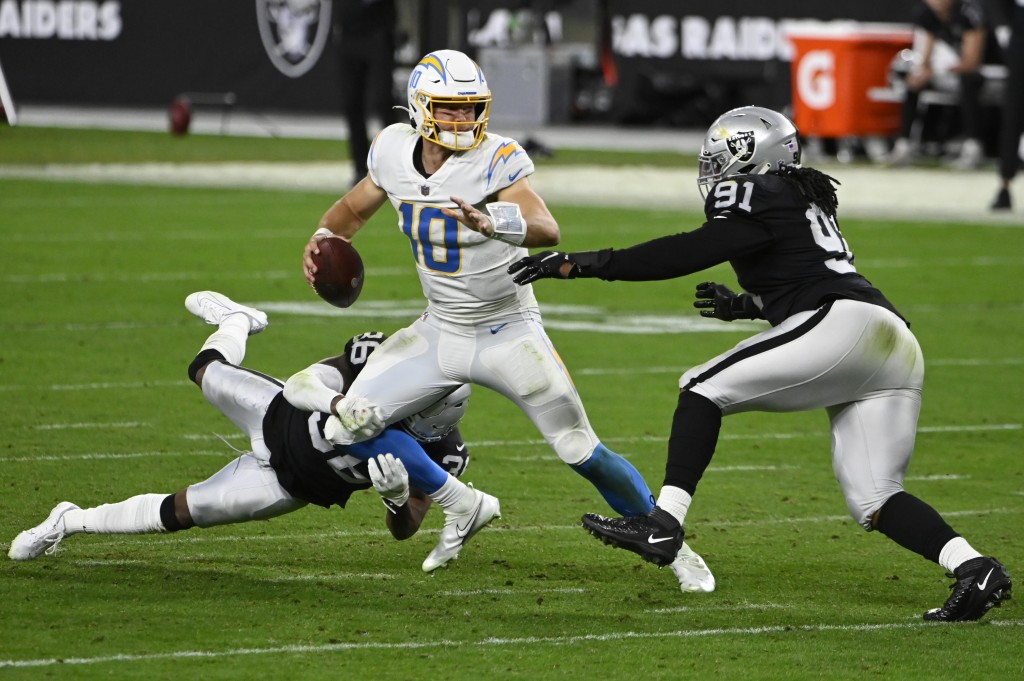 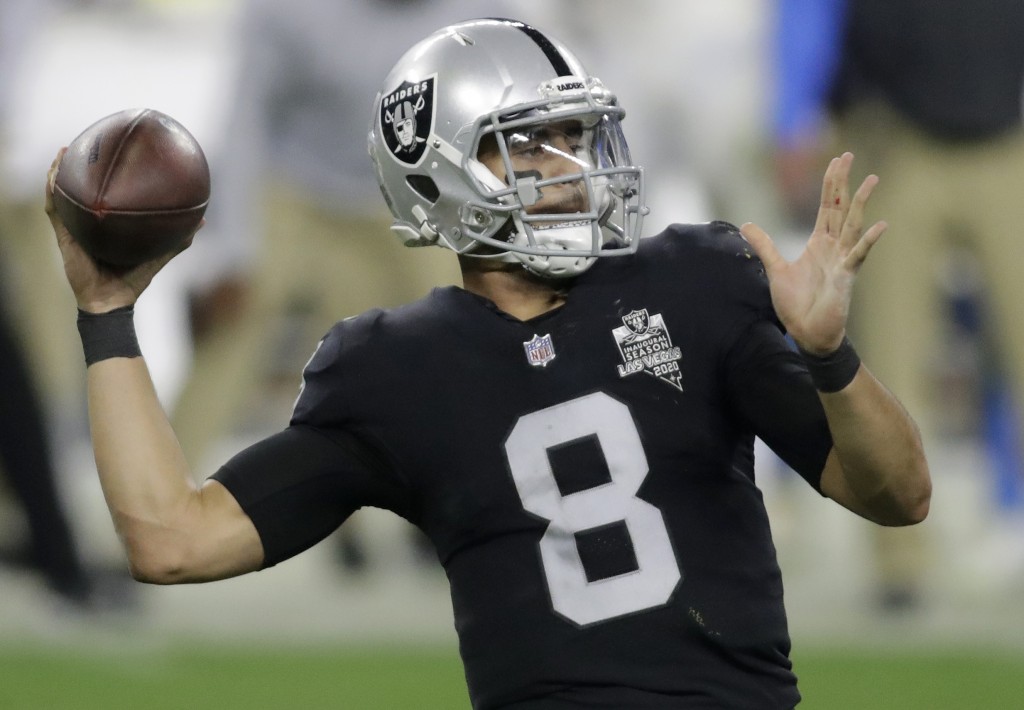 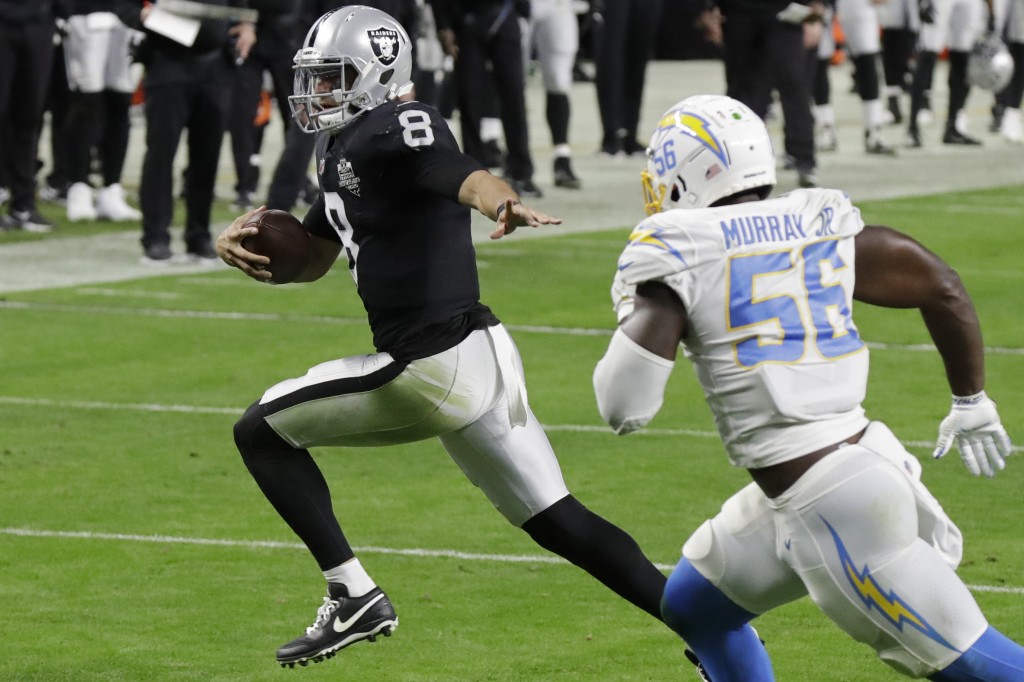 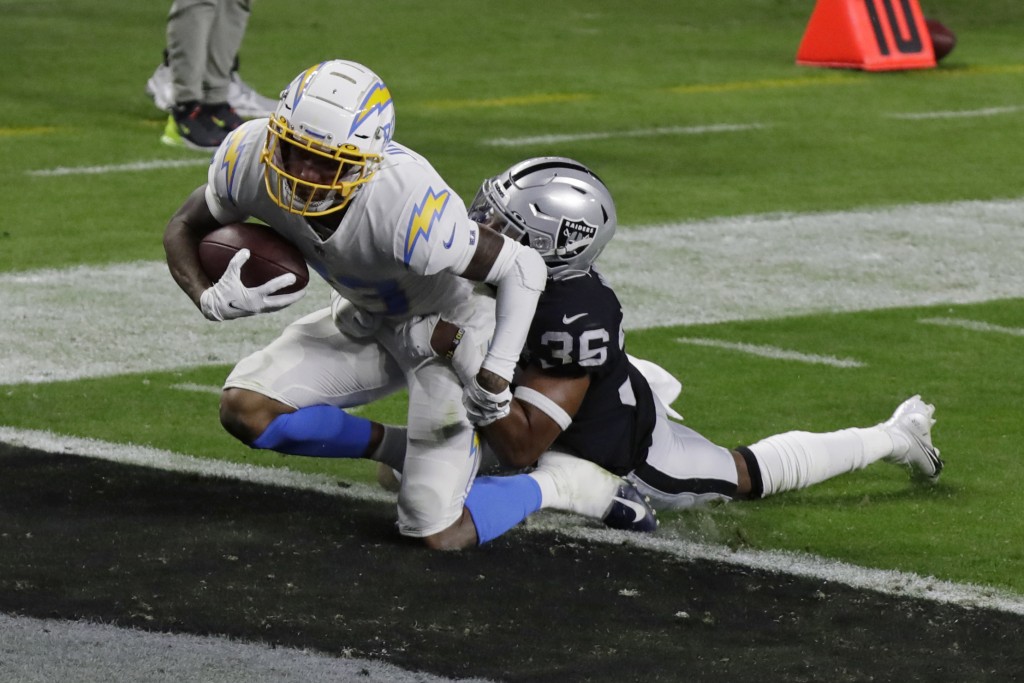 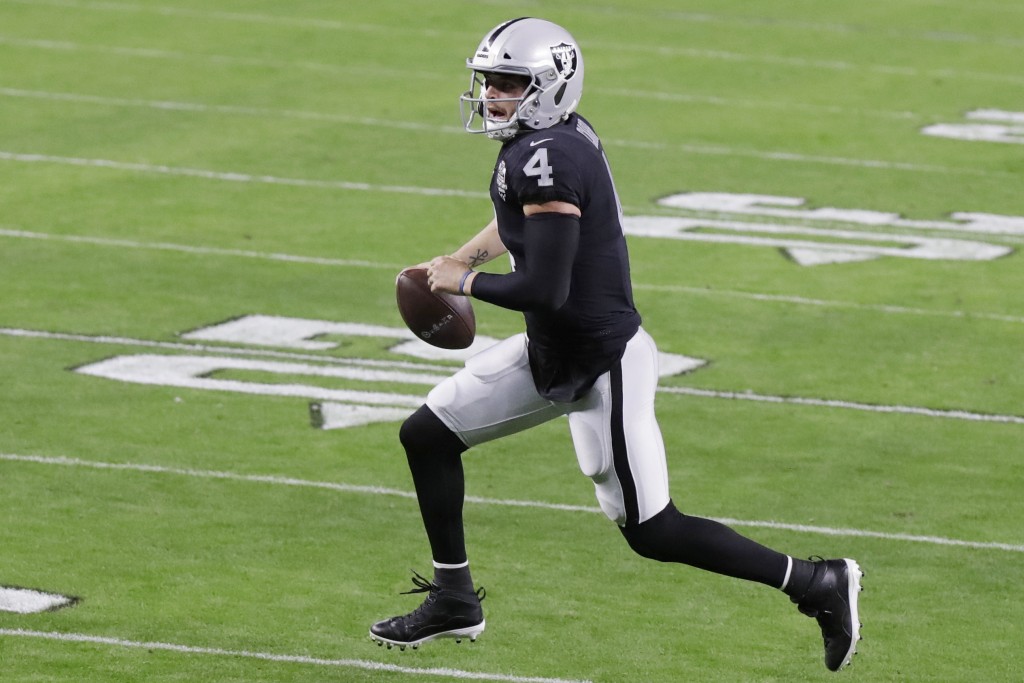 LAS VEGAS (AP) — Justin Herbert scored on 1-yard plunge to give the Los Angeles Chargers a 30-27 overtime victory over the Las Vegas Raiders on Thursday night.

The Chargers (5-9) snapped a nine-game losing streak against their AFC West counterparts. The Raiders (7-7) lost quarterback Derek Carr to a left groin injury in the first quarter. They have lost four of five, all but killing their playoff chances.

Los Angeles improved to 1-2 in overtime games, while all four of its games against division foes have come down to the final play.

Herbert, who targeted nine receivers and completed at least one pass with seven, was 22 for 32 with 314 yards an two touchdowns. He set an NFL rookie record with his eighth 300-yard game.

For the Raiders, the storyline quickly changed from must-win to stay alive in the playoff hunt, to, how-to win with backup Marcus Mariota seeing his first action as a Raider.

Just four days after firing their defensive coordinator Paul Guenther, plus missing four starters on defense, and having their offensive coordinator Greg Olson sidelined after testing positive for COVID-19, the Raiders lost Carr when he came up lame on a third-down scramble near the goal line in the first quarter. Carr immediately went to the locker room and did not return.

Mariota, the No. 2 overall pick in 2015 by Tennessee, hadn’t appeared in a game since he stepped into the Titans’ playoff game in Kansas City on Jan. 19. The sixth-year pro was in for one snap in each of the Titans’ three playoff games last season and hadn’t thrown a touchdown since a 24-10 win in Atlanta on Sept. 29, 2019.

He was poised in his return from the first snap.

n his first drive, he was 3 for 3 for 70 yards and a perfectly placed over-the-top pass to Darren Waller. Mariota also scrambled for 11 yards for a first down.

But the Chargers made quick work of their final possession in the first-half, and took a 17-10 lead into the locker room after Herbert picked apart Las Vegas’ decimated secondary with identical consecutive plays. After connecting with KJ Hill for 26 yards on third down, Herbert found Tyron Johnson for a 26-yard TD strike. It was Herbert’s 27th touchdown pass, tying him with Baker Mayfield for most by a rookie in NFL history.

Mariota carried his magic into the second half, leading the Raiders down field on their first drive of the second half. Josh Jacobs dove head first over the pile and into the end zone to tie it.

Mariota finished 17 of 28 for 226 yards with one TD and one interception. He also rushed for 88 yards on nine carries, including a touchdown. Mariota became just the third Raider to pass for 150 yards, rush for 50 yards, throw one TD and rush for another in the same game, joining Rich Gannon (2000) and Vince Evans (1987).