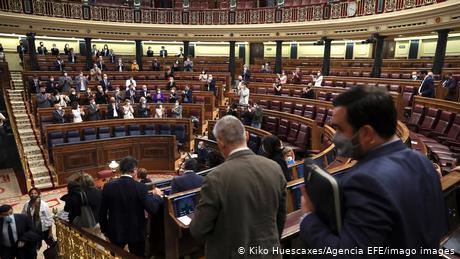 Spain took a significant step towards legalizing euthanasia on Thursday when its parliament voted in favor of allowing physician-assisted suicide for long-suffering patients with no hope of recovery.

The bill, which allows for euthanasia and assisted suicide for people with "serious and incurable" or debilitating permanent conditions deemed "unbearable" by the patient, was approved by a 198-138 vote. The motion received backing from Spain's left-wing coalition government, as well as the center-right Citizens party.

"As a society, we cannot remain impassive when faced with the intolerable pain that many people suffer," Spanish Health Minister Salvador Illa told lawmakers.

The legislation still needs to pass the Senate, though with a large majority of the lower house supporting the bill, as well as almost 90% of Spaniards according to a 2019 survey, the proposal is expected to be signed into law by spring 2021.

Assisted suicide currently carries a jail term of up to 10 years and the bill faced opposition from the conservative Popular Party and the far-right Vox party.

A small group of people gathered outside the parliament in Madrid waving black flags with skulls and crossbones as a protest against legalizing euthanasia.

Nevertheless, others that support the bill planned rallies in cities across Spain to celebrate Thursday's declaration.

Details of the process

Patients must ask to die on four separate occasions during the euthanasia process. The first two requests must be in writing and submitted over two weeks apart. The individual must reaffirm that request a third time after consulting with a doctor and once more just before undergoing the procedure to terminate his or her life.

The willing patient must be a Spanish citizen or resident, of adult age, and able to make rational decisions.

The law will also allow any medical worker to refuse to participate on grounds of belief in a country where the Roman Catholic Church, which deeply opposes euthanasia, has for many years set the tone for Spain's moral authority.

Thursday's vote was not attended by Spanish Prime Minister Pedro Sanchez, who is currently in quarantine despite testing negative for the coronavirus, after he came into close contact with French President Emmanuel Macron during a visit to Paris on Monday. Macron has since tested positive.