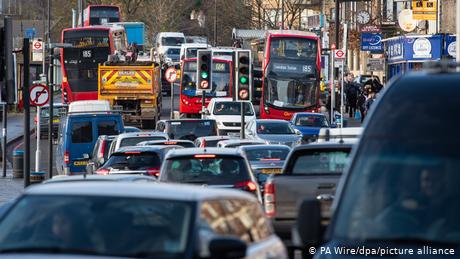 Britain's Lung Foundation and Asthma UK said the re-run inquest had laid bare the "invisible dangers of breathing dirty air" while Mayor Sadiq Khan said it was a "landmark moment" for London to push for low traffic emissions.

Ella, who was 9 when she died of respiratory failure, had lived in southeast London, close the busy ring-road the South Circular Road (the A205), and had been taken to hospital nearly 30 times in distress.

She had been "exposed to levels of nitrogen dioxide in excess of World Health Organization guidelines," said Barlow. The WHO's guideline limit for nitrogen dioxide (NO2), adopted by the EU and by extension the UK prior to Brexit, stands at an annual mean of 40 micrograms per cubic meter of air.

Likely to save 'more children's lives'

Ella's mother, Rosamund, told reporters after Barlow's verdict that the issue was "far from over," adding on Twitter: "Hopefully this will mean many more children's lives being saved."

"As we walk around our city, there are still illegal levels of air pollution," she said.

London Mayor Sadiq Khan described the second inquest's verdict as a "landmark moment" that highlighted efforts to establish an inner-city low emission zone similar to some 200 already in operation across Europe.

The capital is not expected to lower its pollution to legal limits until 2025, according to a study by King's College London.

Across Britain each year between 28,000 and 36,000 deaths are attributed to air pollution, and worldwide it kills some 7 million persons prematurely, according to the WHO, 600,000 of them children.

Environmental law charity ClientEarth described the coroner's finding as a "legal first" that would "certainly send a signal to the UK government."