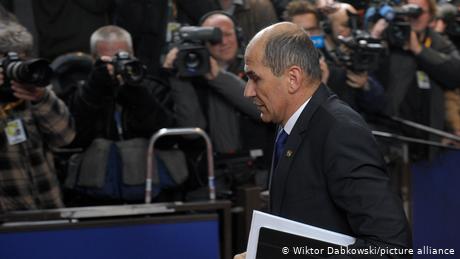 The future of Slovenia's national press agency, STA, is at risk after the Slovenian government suspended funding earlier this month and said its funding for 2021 is also at risk.

If funds are not restored by the end of the year, it "would mean a loss of almost half a million euros," STA director Bojan Veselinovic told DW, adding that the government has never been late with its payments. "It means that we would run out of money for the salaries of 70 people," he added. STA currently employs 80 journalists and photo reporters.

Uros Urbanija, head of the government's information office (UKOM), has blamed the press agency for the funding refusal, saying STA management had failed to provide the necessary data for the agency's financial operations to "verify the credibility and eligibility of this funding." UKOM provides around €2 million ($2.5 million) annually to fund STA's operations. In return, STA is obliged to provide regular reports on how the public funds are spent.

Criticism at home and abroad

Conservative Prime Minister Janez Jansa, who took office in March, has consistently criticized STA's reporting on his government's activities and handling of the COVID-19 pandemic.

In an October tweet, Jansa said STA was a "national disgrace, an evident abuse of the name it carries." The prime minister accused the agency of giving more attention to an interview with rapper Zlatko, a regular critic of the Jansa government, in which he presented his new album, than to Jansa's meeting with Hungarian Prime Minister Viktor Orban.

But on Monday, Jansa claimed the government was not interfering in STA's work, adding that "professional and independent media are in the exclusive interest of the party and the government I lead."

The move to halt STA's funding has met with condemnation at home and abroad. Opposition parties, part of the four-party ruling coalition, have criticized the move and demanded STA's financing be restored. Renate Schroeder, director of the European Federation of Journalists, called the move to cut funding "a great threat to media pluralism and media freedom in Slovenia."

Schroeder's comments were echoed by the Slovenian Journalists Association (DNS) and the European Alliance of News Agencies (EANA). "It is obvious that this is another attempt to destroy the national press agency that represents one of the pillars of quality and impartial reporting," said DNS. "That is something we have already seen in neighboring Hungary."

In a letter on December 7, Dunja Mijatovic, the Council of Europe's human rights commissioner, called on Jansa to immediately reverse the decision. "I believe you would agree with me that well-funded and strong public media are an essential element of a democratic society," she said.

Jamie Wiseman, an advocacy officer at the International Press Institute, believes the move will seriously jeopardize STA's ability to keep citizens informed during the COVID-19 pandemic and in the future. He called it a clear threat to press freedom in Slovenia.

"We believe the willingness of the UKOM to cut funding appears to reflect the ruling party's broader policy of opposition towards the country's public service media, one driven by personal grievances and justified through unfair accusations of institutional bias," said Wiseman.

Earlier this week, the parliamentary culture committee called on the Slovenian government to fulfill its legal obligations and provide the necessary funding to ensure STA's future stability.

In addition to a detailed account of STA's finances, UKOM also sent a letter at the end of October asking for an explanation as to why STA Editor-in-Chief Barbara Strukelj had signed a letter wherein the editors of several major Slovenian media outlets had warned about government pressure on the media. UKOM also requested information on STA's market operation and staff wages.

STA director Veselinovic told DW he had provided all the requested financial information, but said the additional information — "copies of marketing contracts with our clients" and employee personnel data — had nothing to do with agency's operations in recent months.

"If I agreed to give them explanations about how long an interview or a report is, or why the chief editor and 21 journalists sign a declaration, then I would be breaching the media legislation," Veselinovic told news agency Agence France-Presse (AFP) in early December.

"This absolutely exceeds their legal powers and constitutes an interference with the STA's editorial autonomy," said Marko Milosavljevic, a journalism professor at the University of Ljubljana and a member of the Committee of Experts on Media Environment and Reform at the Council of Europe (MSI-REF).

Milosavljevic called the funding cut a systematic form of attack on Slovenia's independent public media. "It is the Machiavellianism of this government, which is ruthlessly trying to destroy all the professionalism and independence of various public institutions, especially in the field of culture and the media," he said.