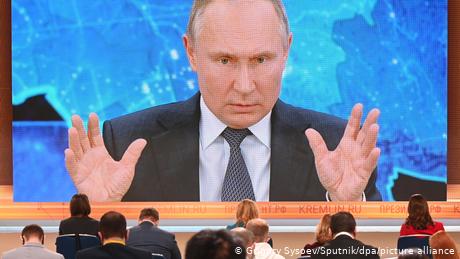 Putin said recent reports that Russian state security agents had poisoned Navalny were part of a US intelligence plot to discredit him.

An investigation by Bellingcat and Russian media outlet The Insider in cooperation with Der Spiegel and CNN identified a team of Federal Security Service (FSB) agents who allegedly stalked Navalny over several years. The investigation, endorsed by Navalny, named the agents and the poison laboratories allegedly responsible for the attack based on data including phone logs and travel records.

However, Putin rejected this, saying: "It's a trick to attack the leaders [of Russia]."

He said Navalny enjoyed the support of US special services, and that Russian intelligence officers were right to tail him.

"But that absolutely does not mean he needs to be poisoned," said Putin. "Who needs him?"

If the Russian special services had wanted to poison Navalny, "they would have taken it to the end," he said, implying they would have successfully killed him, instead of just hurting him to the extent that medics put him in an induced coma.

Navalny said he was unable to immediately respond to Putin's comments as he had been questioned by German authorities all day.

"Judging by the number of messages on my phone, Putin said something about the FSB poisoner investigation. I don't know anything yet — I've been under interrogation all day. The German prosecutor's office questioned me at the request of the Russian authorities. I'll see what it is now," he wrote on Twitter.

German Foreign Minister Heiko Maas told reporters in Berlin that Russia had had "plenty of opportunities in the past weeks and months to contribute to the part of the investigation that can only be conducted there [in Russia]." That had not happened, and had been "noted" in Berlin, he said.

Instead, the world had witnessed "many smokescreens released from Moscow" on this issue in recent weeks, suggesting the Kremlin had no interest in establishing the facts.

Founder and executive director of Bellingcat Eliot Higgins said on Twitter that Putin was "trying to sound strong after his intelligence services have been humiliated."

The European Union on Thursday imposed new sanctions and entry bans on six Russians, including FSB chief Alexander Bortnikov and one organization over the poisoning.