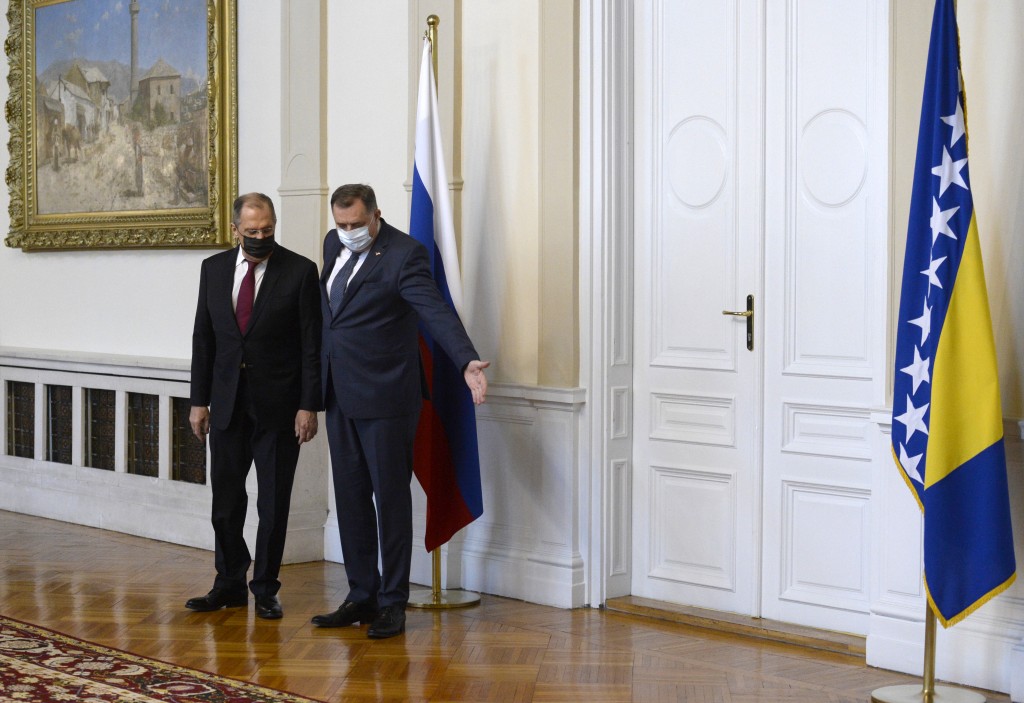 SARAJEVO, Bosnia-Herzegovina (AP) — Bosnia's authorities opened an investigation Thursday into how a possibly stolen 300-year-old gilded icon from Ukraine ended up being given as a gift to Russian Foreign Minister Sergey Lavrov.

The presiding Serb member of Bosnia’s three-member presidency, Milorad Dodik, gave the religious painting to Lavrov during his visit to Bosnia earlier this week.

The historic artefact is believed to be from war-torn eastern Ukraine which has been under the control of pro-Russian rebels. Dozens of Serbs have fought alongside the rebels in the conflict, which started in 2014.

The Bosnian Serb Srna news agency carried photos of the icon, including its back that shows a stamp of its authenticity written in Ukrainian.

The Ukrainian Embassy in Sarajevo has requested information on how the Bosnian Serb leader came into possession of the icon. Failure to provide the information would mean Bosnia is supporting Russia’s “aggressive policy and military actions’’ in eastern Ukraine, the embassy was cited as saying by Sarajevo portal Klix.ba.

Bosnia’s Foreign Ministry confirmed that it received the Ukrainian note and said it was forwarded to the three-member presidency for an answer.

Bosnian Foreign Minister Bisera Turkovic told the portal that the country’s prosecution office should urgently answer the Ukrainian request and determine if Dodik “came into possession of a stolen Ukrainian property.”

“Huge (diplomatic) damage would be inflicted on Bosnia-Herzegovina if one of its high officials is accused of giving a gift that is stolen,” she said.

Dodik, who was the only presidency member who met Lavrov during his visit to Bosnia earlier this week, has so far not reacted to the accusations. The other two, a Bosniak Muslim and a Croat, refused to meet the Russian foreign minister citing his “disrespect’’ of the Bosnian state when he met Dodik.

They said they were primarily angered by the lack of a Bosnian flag during the meeting with Dodik, and Lavrov’s open support for the Bosnian Serb blocking of a NATO membership bid.

Lavrov’s visit to the Balkans coincided with the 25th anniversary of the signing of the U.S.-mediated Dayton peace agreement that ended a four-year war in Bosnia in the 1990s.

Although the deal ended the bloodshed, it left Bosnia largely dysfunctional and divided roughly in half between the Bosnian Serb Republika Srpska and the Muslim-Croat Federation.