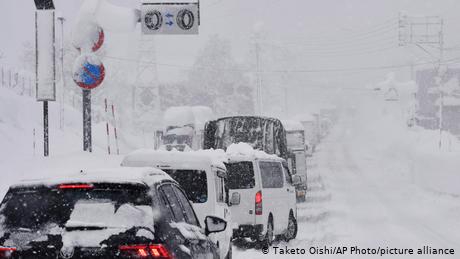 Around 1,000 cars have been stranded in a snowstorm in Japan, according to local media. The vehicles were stuck on the Kan-Etsu Expressway between Tsukiyono town and Yuzawa town, north of Tokyo, Kyodo News reported on Thursday.

About 200 vehicles were also temporarily stuck in heavy snow on another expressway.

The snowfall also cut off power to about 10,000 households.

Extent of the snowfall

Much of the storm was centered on Niigata and Gunma prefectures, which saw about 2 meters (6.6 feet) of snow over three days, according to public broadcaster NHK.

The government called an emergency meeting to address the fallout

Prime Minister Yoshihide Suga was expected to attend the meeting with relevant ministries on Thursday afternoon, his office said.