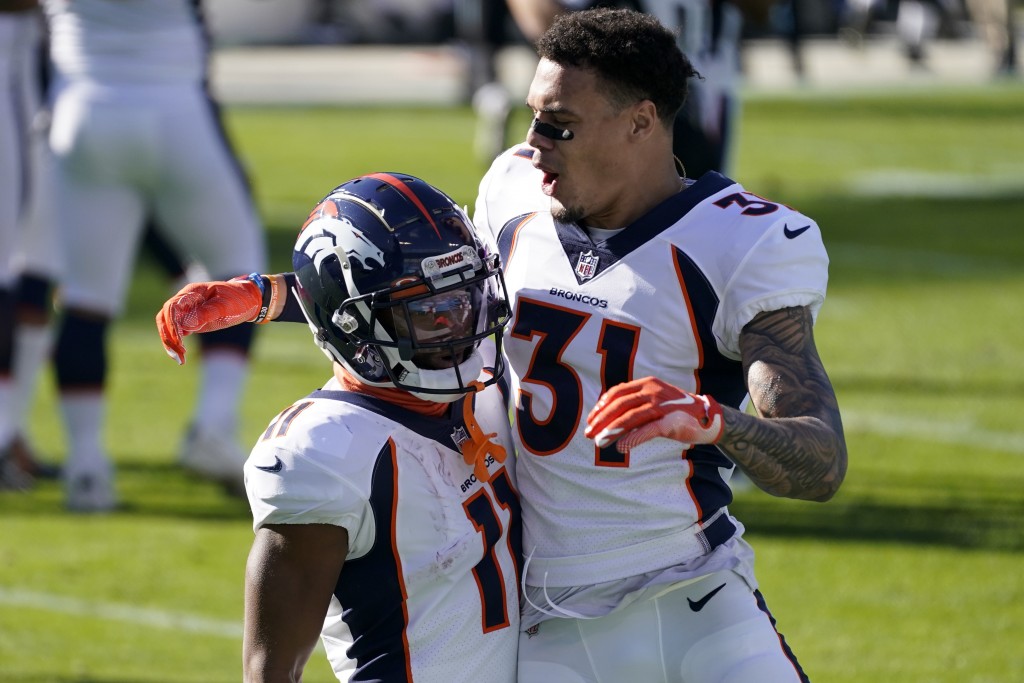 ENGLEWOOD, Colo. (AP) — Justin Simmons keeps piling stops on the football field and salutes off it.

The Broncos fifth-year safety is having another stellar season for a scuffling squad, and hopes to parlay it into the long-term deal with Denver that eluded him last offseason.

“It would mean everything,” said Simmons, who’s playing on the $11.441 million franchise tag that prevents the Broncos from negotiating with him again until next spring. “I’ve built so many great relationships here, and I’ve built so many great relationships in the community. There are so many things that I care about here. It’s a no-brainer on my end."

Although Simmons’ career has coincided with the Broncos’ fall from Super Bowl champion to perennial also-ran, the heart of Denver’s defense sees the team inching closer to contention even though another loss will mean four consecutive losing seasons for the first time in more than four decades.

“I know it’s been difficult times in terms of the win column here, but I truly believe there have been a lot of things that have been stacked against us in terms of injuries, guys missing time and not having a full roster,” Simmons said. “We’re just a couple pieces away from being right where everyone in Broncos Country is used to seeing the Broncos ... and I’d like to be a part of that moving forward.”

Simmons is on pace for his first 100-tackle season, recorded the first fumble recovery of his career and has tied his career high with four interceptions this season.

“I really believe he should make the Pro Bowl this year,” coach Vic Fangio said. “I’ll be disappointed if he doesn’t.”

Simmons has already started stacking up the accolades.

Last week, the Broncos named him their Walter Payton Man of the Year nominee for the second straight season. On Wednesday, Simmons became the first three-time recipient of the Darrent Williams Good Guy award, which is selected by local media in honor of the late cornerback who was gunned down on New Year’s Day 2007.

“I’m really just following the legacies that amazing people have left behind here and Darrent is one of those amazing people,” said Simmons, who also won the honor in 2017 and ’19.

ESPN Senior Writer Jeff Legwold said Simmons “was repeatedly singled out, in this unique season, for the consistent quality and breadth of his answers on a wide variety of topics, both on and off the field.”

Despite the in-person challenges of the coronavirus pandemic, Simmons channeled his outreach this year on COVID-19 relief and social justice initiatives while also launching the Justin Simmons Foundation, which focuses on youth development, hunger relief and education initiatives, with his wife, Taryn.

“He seems to always have time to help people,” Fangio said.

Simmons said the COVID-19 pandemic has caused him to “refocus my lens on what’s truly important.”

Quarterback Drew Lock said Simmons is the same humble teammate that everyone else sees and hears in public.

“One of the best. I think whatever you feel that he portrays outside, he portrays in here,” Lock said. “It’s not a guy that is a two-faced type person — the one in the public, one in the media, and the one in the locker room. He carries himself with a lot of respect.

“He carries himself as a leader of this team and he realizes that if you’re going to be the leader of an organization like this, it doesn’t only happen in the locker room," Lock added. "It happens outside the football field when they see you as a person and a human, and he’s one of the best humans I’ve ever met.”

NOTES: LT Garett Bolles and TE Noah Fant returned from illnesses that knocked them out of week’s game at Carolina. ... Fangio said he expects RBs Melvin Gordon (shoulder) and Phillip Lindsay (hip) to “be OK by the end of the week.” ... Fangio had high praise for rookie RG Netane Muti, who made his first NFL start last weekend in place of Graham Glasgow (foot), whom he said is doing much better this week. ... The Broncos signed CB Parnell Motley off the 49ers’ practice squad and activated QB3 Jeff Driskel from the reserve/COVID-19 list Wednesday. Also, CBs Duke Dawson and Kevin Toliver II went on IR with ACL tears. And DL Darius Kilgo reverted to Denver’s practice squad from the COVID-19 list.