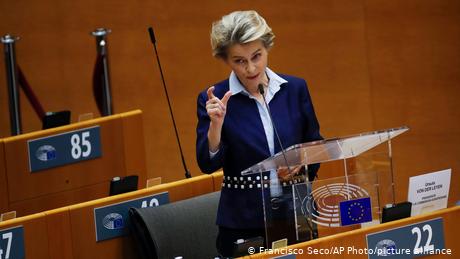 Speaking to MEPs in Brussels, she said both teams were "working day and night to reach an agreement."

But the former German defense minister claimed there was no guarantee that a compromise could be found on the thorny issue that has hampered progress in the discussions for months.

Britain's fishing industry has long complained about its share of the country's stocks under the EU's common fisheries policy.

EU coastal states argue their own trawlers would be put out of business if no deal is struck between both sides, as they will be locked out of British waters.

"We do not question the UK's sovereignty on its own waters," von der Leyen told the European Parliament.

"But we ask for predictability and stability for our fishermen and fisherwomen," she said. "In all honesty, it sometimes feels that we will not be able to resolve this question."

A source close to the British negotiation team told DW that the government has "always been absolutely clear that the UK will have control over access to our waters and a better deal for UK fishing communities."

'Narrow' path to a Brexit deal

The senior EU official said "the path may be very narrow [for a Brexit deal] but it is there."

She added that the UK and the EU had made good progress on how to stop Britain undercutting EU firms, known by the trade term as "level-playing field" rules.

Common principles on state aid and how to enforce them have been agreed, von der Leyen told MEPs.

She said British negotiator David Frost and his EU counterpart, Michel Barnier, have agreed on a baseline on the non-regression of standards.

But "the question still remains on how to really future-proof fair competition," she said, adding the issue of governance was "largely resolved."

Is time running out?

Von der Leyen said the next days "are going to be decisive."

"I know deadlines have been missed time and again," she said. "The clock puts us all in a very difficult situation."

A UK government official told DW: "We've made some progress, but we are still very far apart in key areas."

Britain officially left the European Union on January 31. But since then it has been in what is known as a Brexit transition phase, where it follows all EU rules and regulations and is effectively still a full member of the single market and the customs union.

The idea behind the transition period was to give businesses enough time to prepare for whatever deal was struck between both sides.

However, progress has been slow throughout 2020 with both negotiating teams accusing each other of intransigence.

In a blow to students, EU chief negotiator Michel Barnier told MEPs on Monday "that we have no agreement with the British on Erasmus," according to a leaked transcript obtained by DW.

The Erasmus program is the EU's student exchange scheme that has allowed British and EU students to study abroad.

Non-EU nations Turkey, Iceland, Norway and Serbia are also what is called "program members," which means they participate fully in the popular scheme.