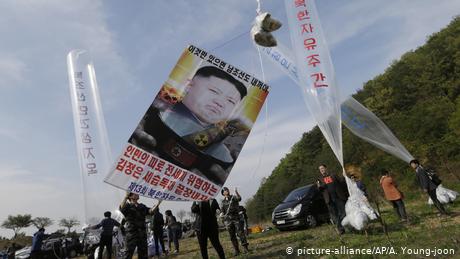 Human rights groups have accused the South Korean government of capitulating to North Korea after parliament passed a controversial bill late on Monday that makes it illegal to launch helium balloons carrying propaganda leaflets into the North.

Groups of defectors, foreign rights activists and politicians from both South Korea and overseas have joined in the criticism of the government of President Moon Jae-in, accusing him of failing to act in the best interests of the impoverished and repressed people of the North.

At least one defector who has previously been active in sending balloons carrying propaganda, television programs on memory sticks and small amounts of food and foreign currency has said he intends to file a legal case against the government on the grounds that it violates his constitutional right to freedom of speech.

The revisions to the Development of Inter-Korean Relations Act, passed on Monday, make it illegal to send leaflets that are considered critical of North Korean dictator Kim Jong Un or his country's political system across the border, either by balloon or in bottles that are released off the coast and float ashore on the current.

Anyone found guilty of violating the law can now receive a prison sentence of up to three years or a fine of 30 million won (€22,549). The legislation was passed by a vote of 187 to zero after opposition parties staged a boycott of the proceedings.

As part of bridge-building measures in 2018, when inter-Korean relations were on a better footing, Seoul and Pyongyang agreed to halt "hostile acts" on the border, including the sending of leaflets.

Human rights and defector groups continued their campaigns, however, and were clearly having some effect north of the Demilitarized Zone that divides the Korean Peninsula. On June 13, Kim Yo Jong, the sister of Kim Jong Un, demanded that Seoul crack down on defectors who were sending propaganda into the North, describing them as "human scum."

Three days later, in an apparent show of strength, North Korea blew up the Inter-Korean Liaison Office in Kaesong, a blast that was caught on camera from the Southern side of the border. Within days, Moon announced that his government was drawing up new legislation to outlaw propaganda campaigns against the North.

"The new law has triggered a lot of debate, with the majority of people and the opposition parties quite strongly against it," Rah Jong-yil, a former diplomat and head of the South Korean intelligence department charged with monitoring North Korea, told DW.

"The most common complaint is that they have gone too far to meet the demands of the North. The sense is that the government here gave in to threats or blackmail from the North very quickly, very easily," he added.

Rah says he is personally not a big supporter of the balloon propaganda campaigns because they have limited effectiveness, but he insists that the people who are sending messages into the North are expressing free speech, which is protected under the constitution. And he dismisses the reason that the government has given for its draconian legislation.

"Their argument is flimsy," Rah said. "They say they have acted to protect people who live in the areas close to the border, areas which the North has threatened with artillery barrages if the balloon launches are not halted. But that's a tenuous explanation, as I would say that it is the government's duty to protect citizens when they are threatened by an outside force, no matter the actions of others."

Leif-Eric Easley, an associate professor of international studies at Ewha Womans University in Seoul, says the government's actions may cause it more problems than it solves.

"The South Korean government has legitimate safety concerns around citizens sending leaflets into the North, but the partisan passage and larger scope of this legislation make it appear more about cracking down on activists critical of the Kim regime," he told DW.

"The ruling party will now face growing criticism, at home and abroad, on civil liberties and human rights," he added. "The government could have done more to build domestic consensus while demanding that Pyongyang implement the Comprehensive Military Agreement, replace the inter-Korean liaison office it destroyed and allow reunions of separated families."

The news legislation has caught the attention of politicians in the US, with Michael McCaul, ranking member of the House Foreign Affairs Committee, telling Voice of America radio that the new law poses "a serious concern" as freedom of expression "is a cornerstone of democracy." Previously, the chairman of the House's human rights commission warned that he intends to open a hearing to look into Seoul's failure to uphold civil and political rights.

Rights groups are supporting political efforts to force a rethink in Seoul.

Park Sang-hak, the defector who heads Fighters for a Free North Korea said he intends to fight the government through the courts to continue sending leaflets into the North.

Describing the law as effectively one that was dictated by Kim's sister, he said in a statement it is a "humiliation and an encroachment on the freedom of expression."

Ken Kato, the Japan-based director of Human Rights Asia, said he was "saddened that the South Korean government appears to be giving in to the communist regime that their forefathers fought so hard to protect the nation from."

"They seem to be keen to abandon democracy in Seoul right now, passing laws to make freedom of speech impossible and effectively assisting North Korea to continue its repression and abuses of its own people," he told DW.

"The people of the North cannot help but think that the international community is abandoning them," he added. "If the balloons stop, then they will not know what is happening in the world beyond their borders, they will not know how evil their own leaders are and they will not get the small amounts of food and money that might keep them alive this winter."