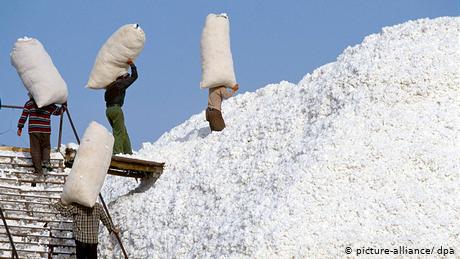 China's treatment of ethnic minorities in the Xinjiang region came into the spotlight again after a new report found evidence indicating Uighur laborers are being forced to pick cotton by hand.

The research was published by the US-based think-tank the Center for Global Policy and was reviewed by the BBC as well as German newspaper Süddeutsche Zeitung.

"It is impossible to define where coercion ends and where local consent may begin," wrote Adrian Zenz, the researcher who found the documents.

Major fashion brands, including Nike, Adidas, Gap and others have come under fire by rights groups for using cotton-sourced from China. The Xinjiang region produces over 20% of the world's cotton — making it a major player in global textile supply chains.

Not the time for 'business as usual'

"The link between modern day slavery and the genocide itself cannot be separated," he said. "It is not [the] correct time to do business as usual."

Isa, a world leading authority on China's policy of detaining ethnic minorities including Muslim-minority Uighurs and Kazakhs in the province of Xinjiang, also called on Western governments to do more.

"We haven't seen any real action to stop this Uighur genocide," Isa said, adding that European countries in particular have not taken "concrete action."

He noted that although the International Criminal Court (ICC) declined to take on a genocide complaint against China — other international bodies and organizations where Beijing is a member can "take action politically" and legally.

China has come under intense international criticism over its policies in Xinjiang, where rights groups say as many as 1 million Uighurs and other mostly Muslim minorities have been held in internment camps.

Beijing said that the heavily guarded centers are educational and vocational institutes and that all who have attended have "graduated" and gone home.