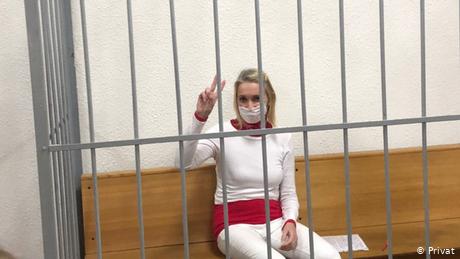 Gennadiy Kasyan leafed through the letters that his sister, Natalia Hershe, had sent him from prison. "She ends every letter with the words 'We believe! We can! We will win!'" he said. It is the motto of the opposition in Belarus.

"I am well," she wrote in one letter. "What looks like a catastrophe to begin with could turn out later to be a big, big opportunity," she added.

In her letter, Hershe makes no mention of the fact that the overcrowded cell she spent her first weeks in in the Okrestina detention center had no mattresses or running water. Kasyan found these things out from another former detainee: the national basketball player Yelena Leuchanka, who spent several days with Hershe and other protesters in a cell.

Hershe is 51 years old. She comes from Belarus but has been living for 12 years in Switzerland, where she has a job, a partner and a grown-up daughter. In September, she traveled to Belarus for what was meant to be a 10-day holiday. She has been in prison for almost three months since being arrested with almost 350 other demonstrators for taking part in a protest held by Belarusian women on September 19.

Most of them were taken to the police station and then released. But, at first, Hershe had to stay in prison for 15 days, accused of a petty offense. Later, authorities launched penal proceedings against her. On December 7, she was sentenced to 2 1/2 years of camp imprisonment for resisting police — it was alleged that she had pulled a balaclava from the face of a policeman and given him a 1-centimeter-long (0.4-inch) scratch wound in the process.

More than 30,000 people have been arrested in Belarus since mass protests began after the contested presidential election on August 9, human rights observers say. Most of them were fined or detained for up to 15 days for taking part in unauthorized demonstrations.

Now, however, the regime is starting to take tougher action against protesters. More and more people, including Hershe, are being prosecuted and receiving severe penalties, including yearslong prison sentences. In one case, several activists were sentenced to two years in prison because they had written anti-government slogans on a street; another demonstrator was given a 4 1/2 year sentence because he had tripped a police officer.

In her final plea to the court, Hershe said she lived in a democratic European country in which freedom of opinion and assembly were guaranteed rights. She said she hoped that Belarus would also become a country like that. Her partner, Robert Stäheli, said that Hershe had been impressed by the direct democracy in Switzerland. In the city she lives in, St. Gallen, important local issues are voted on with a show of hands.

"She picks herself up," Stäheli said. "She is afraid, but she keeps going when she is afraid. She doesn't draw back. Ducking away isn't something she does."

Stäheli is in contact with the human rights organization Libereco and the Belarusian diaspora in Switzerland. Together, they have already organized several demonstrations in solidarity with Hershe in Bern and Zurich. "We want media and Swiss authorities to keep focusing on the issue," said Sviatlana Dilser from the association Razam.ch, which has helped organize the rallies.

Hershe has both Belarusian and Swiss citizenship. Her cause has been taken up not only by her circle of supporters in Switzerland, but also by the Swiss Embassy in Minsk. Ambassador Claude Altermatt attended the court hearings and visited Hershe in prison. The Swiss foreign minister, Ignazio Cassis, is among those to call for her release.

"Switzerland can officially express its regret at the verdict but cannot do anything to fight it legally," a representative of Switzerland's Federal Department of Foreign Affairs told DW. The FDFA and Hershe's lawyer are considering further steps.

Hershe has now been held in three different detention centers since her arrest on September 19. In Zhodzina, she drew pencil portraits of the 12 women imprisoned with her. "Each of them has its own story," said Kasyan, whom she sent the pictures to."

Kasyan said he knew his sister would bravely survive the dire conditions in prison. He said she was fascinated by the women's protests in Belarus and hoped that her story would encourage even more people to stand up to the regime of Alexander Lukashenko. "That is my path," she wrote in one of her letters, "and I will take it."

This article has been adapted from German.