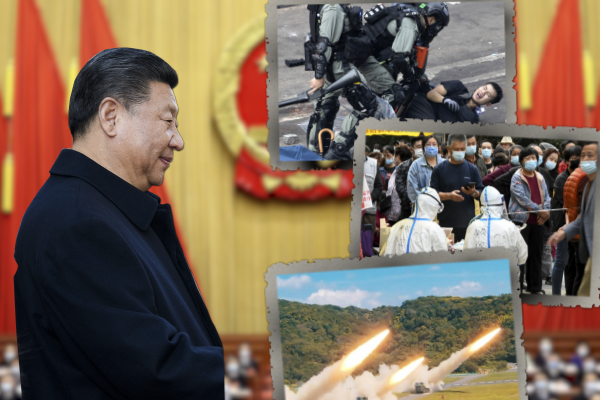 TAIPEI (Taiwan News) — As 2020 dealt a blow to the world with a pandemic, social unrest, and natural disasters, China, the first to be upended by the coronavirus, has rebounded and is trading jabs with the free world.

Amid the turbulence, Chinese leader Xi Jinping (習近平) has managed to continue extending his power and successfully leverage propaganda to silence opposing voices.

The emergence of the coronavirus has posed an unprecedented challenge to China's propaganda machine. In January, after Wuhan doctor Li Wenliang (李文亮) was reprimanded by police for sharing information about a SARS-like virus that caused severe pneumonia, local hospitals were crowded with those bearing symptoms.

Within a few weeks, the Chinese central government realized it had missed the golden period to contain the spread of the deadly virus. Its propaganda arm soon got into full swing to address the public outrage over the rising death toll.

The coronavirus' high transmission rate was a double-edged sword — it overwhelmed hospitals with patients but gave the Chinese Communist Party (CCP) an opportunity to shore up support with a false narrative.

"Wuhan was where the virus was first detected but not where it originated."

"The U.S. army brought the epidemic to Wuhan."

These statements were widely dismissed outside of China. However, they may have been instrumental in bolstering the CCP's authority.

"These arguments were not made to convince foreign countries but to unite the Chinese people," said Tsai Wen-hsuan (蔡文軒), a researcher at Academia Sinica's Institute of Political Science. "Even though not all Chinese buy into what their government said, when the virus' origin is connected with nationalism, its true birthplace no longer matters. Whether you are Chinese and support your country is what people care about."

According to Tsai, China's "wolf warrior" diplomacy revealed that the virus was an immediate threat to the CCP's grip on power. That is why it portrayed the fight against the coronavirus as a war for humanity in which Chinese were "sacrificing themselves to buy time for the whole world" — a narrative that painted the population in a noble light and allowed the party to dodge liability. The Chinese authorities use nationalism to paper over their failures. (Weibo, People's Daily photo)

The pandemic might have been a curveball for Xi in his seventh year ruling the country, but it did not keep him from tightening societal controls and suppressing opponents.

Xi's authority derives from his position as president, chairman of the Central Military Commission, and the CCP general secretary. Although he has never clearly stated he would lead the party for more than two terms, a tradition established by former leader Jiang Zemin (江澤民), many signs show he is not ready to surrender his power.

In 2017, he enshrined his own ideology and ruling techniques into China's constitution, placing his name alongside party founder Mao Zedong's (毛澤東) and reformer Deng Xiaoping's (鄧小平), and he succeeded in removing the term limit on his office the following year. Moreover, he has not nominated any successors to the party's top decision-making body, the Central Political Bureau, as would be expected when preparing for a power transition.

The distribution of power in the CCP went through a dramatic shift after Xi took office in 2013. He purged hundreds of officials, mainly those belonging to Jiang's camp, through an anti-corruption campaign, all the while filling the military and local governments with loyalists.

He has also replicated the cult of personality seen during the Mao era by inserting "Xi Jinping Thought" into the college curriculum and creating a learning app to be used by party members and public servants.

In spite of all these efforts to further consolidate Xi's power, the pro-democracy movement in Hong Kong became a thorn in his side. Xi seeks to establish a personality cult in the vein of Mao with "Xi Jinping Thought." (AP photo)

The "one country, two systems" framework has not only served as a foundation for Hong Kong's freedom but has also been a model intended to lure Taiwan into Chinese rule. This administrative structure is also the promise of Deng, who sowed the seeds for China's golden age of economic growth.

Nevertheless, the system never granted Hongkongers the autonomy they sought, and the rising anti-government sentiment there gave Xi another opportunity to strengthen his control over the region.

The pro-democracy movement gave him an excuse to implement the draconian national security law to imprison and intimidate critics while replacing high-ranking Hong Kong officials, many of them installed by Jiang, with his supporters. "The era in which Jiang's camp could leverage Hong Kong's unrest to counter Xi's arbitrariness is finished," Tsai stated.

Although China is trying to lower Hong Kong's economic importance by developing coastal cities like Shenzhen, Tsai believes it may take at least 20 years to do so.

“The economy will always be the priority for the CCP, and Hong Kong is capable of attracting foreign investment. Besides, the city is still where the CCP bigwigs own properties and launder money,” he explained. Many observers believe Xi is now surrounded by obsequious followers. He lacks the confidence to maintain his authority, so he needs consistent propaganda to reinforce his legitimacy as a long-term leader while he takes on his political enemies.

If the six other members from the Central Political Bureau's Standing Committee all retire as projected in 2022, Xi will get the final say in forming a new committee and opening a new chapter for China under his supremacy. Tsai in his office at Academia Sinica. (Taiwan New Photo)