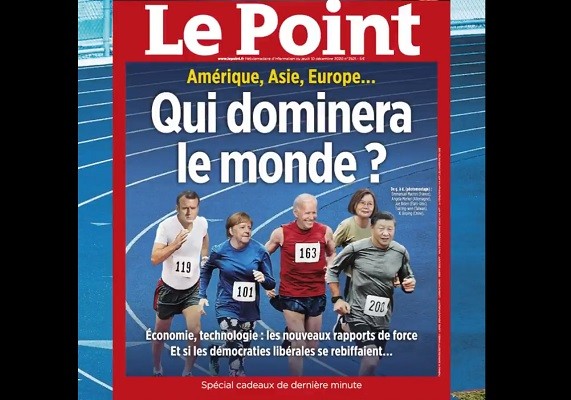 TAIPEI (Taiwan News) — President Tsai Ing-wen (蔡英文) is featured on a humorous cover of the latest issue of the French magazine Le Point, which shows her running an imaginary race for global supremacy with four of the world's top leaders.

On the cover, the French headline reads "Who will dominate the world" and features Tsai running shoulder to shoulder with U.S. President-elect Joe Biden as she closes in on Chinese Communist Party Chairman Xi Jinping (習近平). Pulling ahead of Biden in the outside lane is German Chancellor Angela Merkel, and bringing up the rear is French President Emmanuel Macron.

Among the four major topics covered in the issue is one titled "How did Taiwan do?" in reference to how Taiwan successfully fought the pandemic and maintained normal day-to-day life while other countries were going into lockdown. The magazine compliments the country for using civic awareness to triumph over the coronavirus and says Taipei seems to be on "another planet."

It is notable that the article referred to Tsai as "president" and praised her administration's transparency and how she enlisted the public to fight the virus. The article cited Zsuzsa Anna Ferenczy, a research fellow at Academia Sinica, as saying that although the economic relationship between European countries and China is very important, Taiwan’s technological expertise cannot be ignored, and the pandemic has confirmed this.