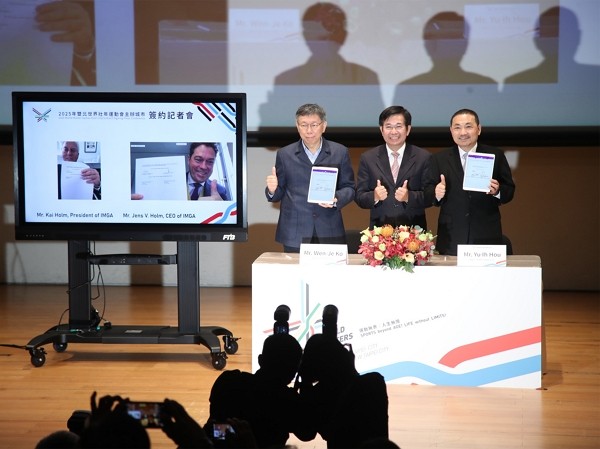 TAIPEI (Taiwan News) — The mayors of Taipei and New Taipei on Thursday (Dec. 10) signed a contract to host the 2025 World Masters Games, which is expected to generate NT$10 billion (US$354.8 million) in tourism revenue.

President Tsai Ing-wen (蔡英文) offered congratulations to the twin cities in a pre-recorded video, saying Taiwan will do its best to host the most successful edition of the Games ever. She promised the country will move toward the ideal of "Sports for All" by relying on its past experience hosting international sporting events, including the 2009 Deaflympics in Taipei, 2009 World Games in Kaohsiung, and the 2017 Taipei Summer Universiade.

After competing against Paris, France, and Perth, Australia for the rights to host the Games, Taipei and New Taipei came out on top in October. Holm, who has visited the two cities in person, is said to have voiced his support in the assessment committee for their right to host the event.

The Taipei City Department of Sports said the Games are scheduled for May 17-30, 2025, and will feature 32 sports. Close to 40,000 athletes from 110 countries are expected to attend, a potential tourism boom for Taiwan, reported CNA.

The World Masters Games is a multi-sport event held every four years for athletes over the age of 30. Since the participants compete as individuals instead of for their home countries, there are no national delegations.