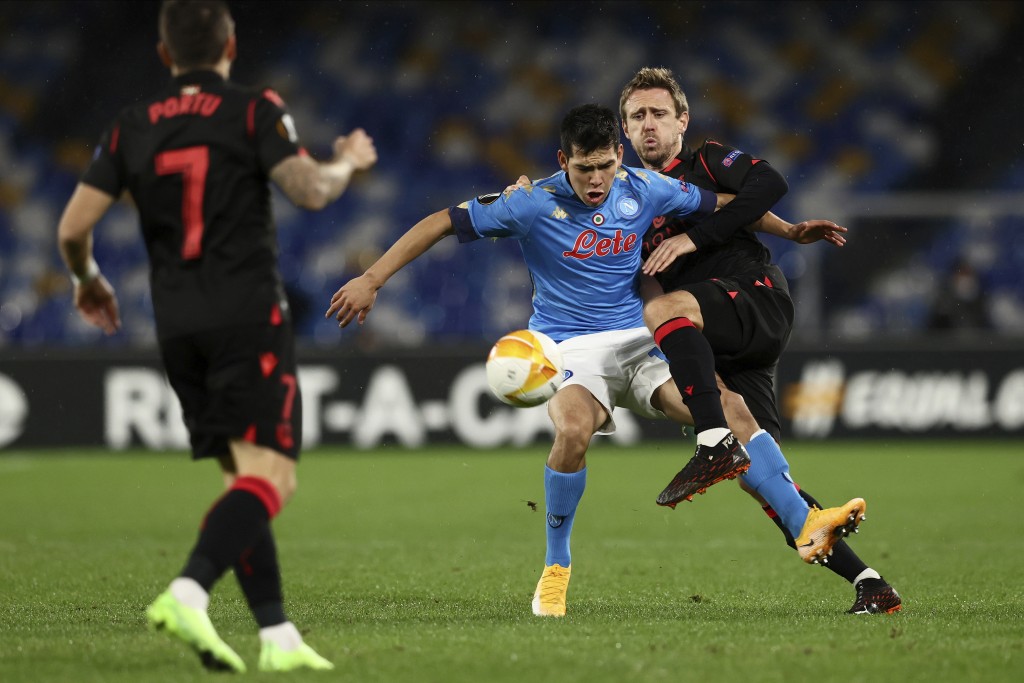 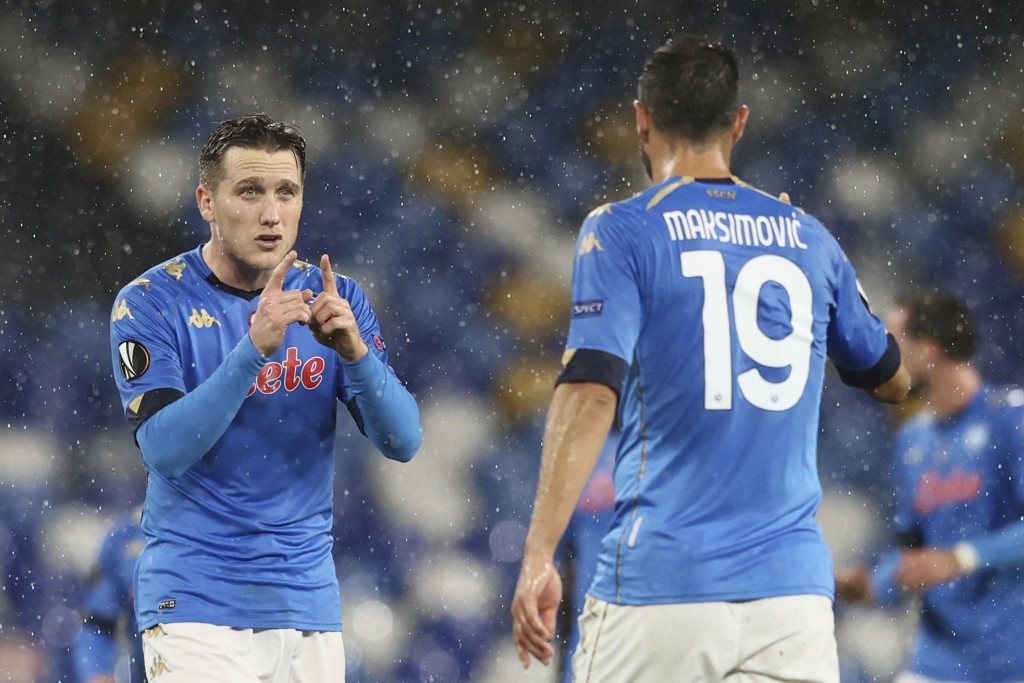 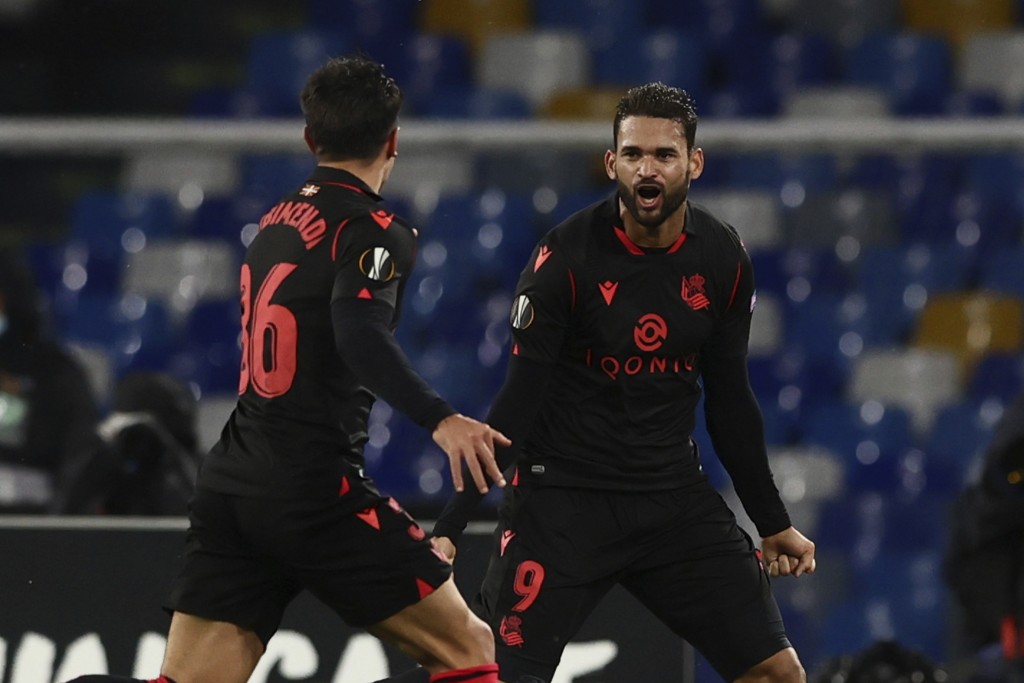 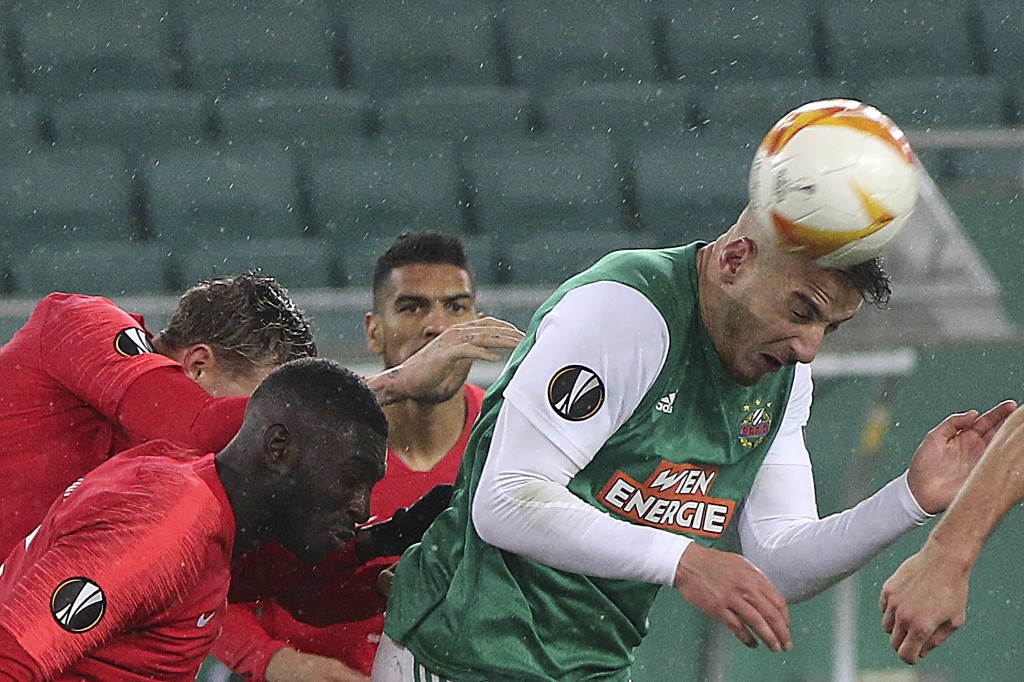 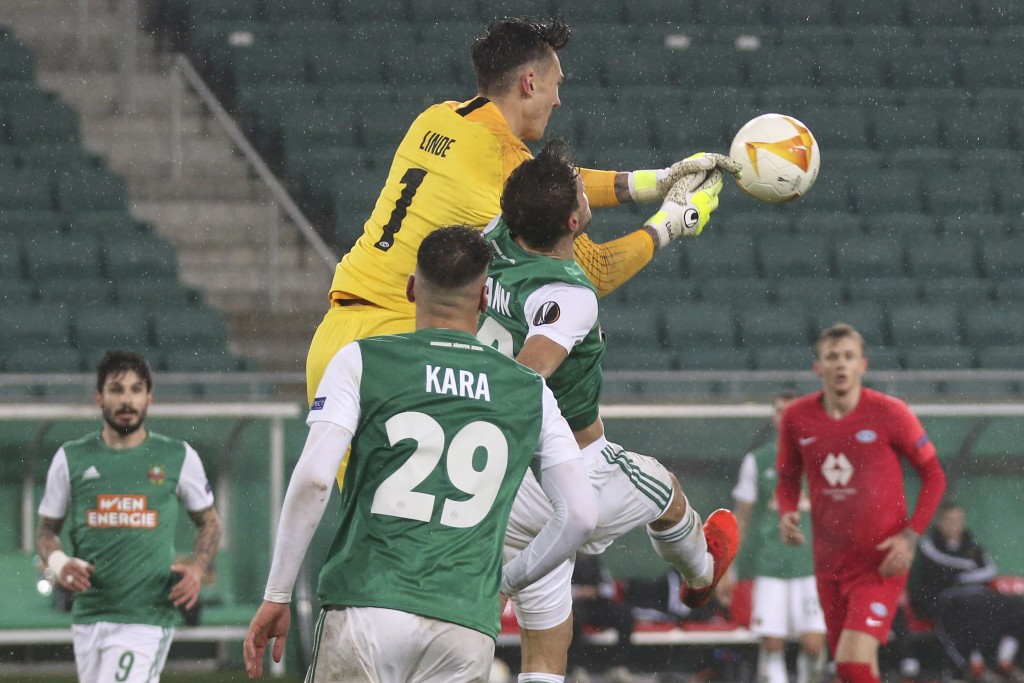 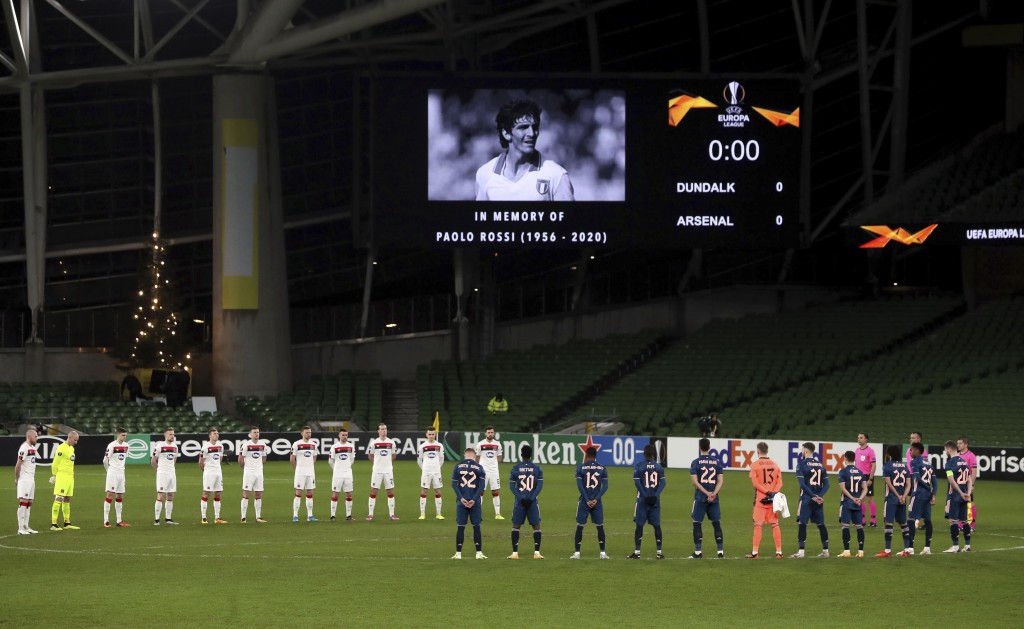 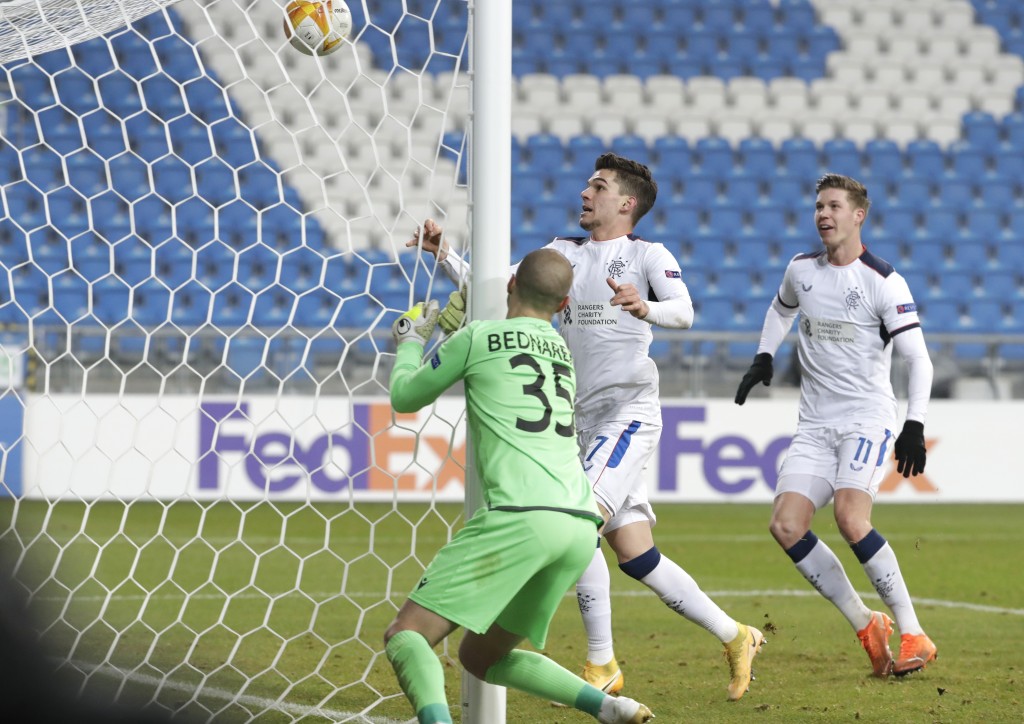 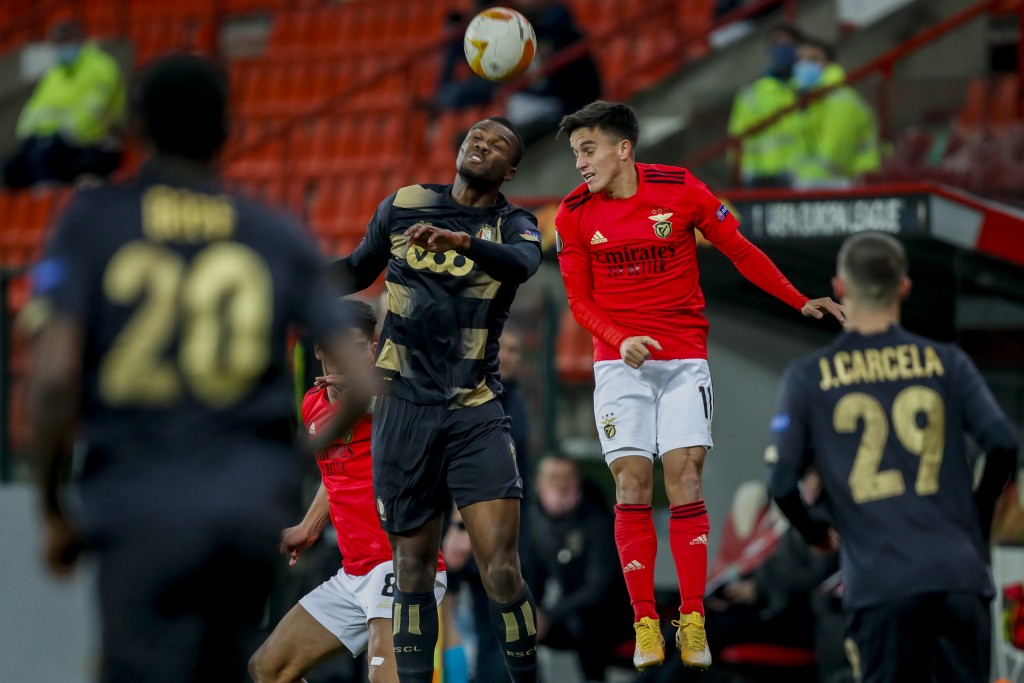 Napoli and Real Sociedad both advanced from a tightly contested Europa League group after a 1-1 draw on Thursday, with Willian José netting a crucial equalizer for the Spanish team in the 90th minute.

The result meant Napoli finished top of Group F, while Sociedad edged ahead of AZ Alkmaar into second. Alkmaar would have advanced with a win but lost 2-1 at already eliminated Rijelka.

Norway’s Molde also made the round of 32 after a 2-2 draw with Rapid Vienna in the final round of group-stage matches.

The final two spots in the knockout rounds will be decided in the late games Thursday.

Already qualified with two games to spare, Arsenal made it six wins from six with a 4-2 away victory at Dundalk.

A total of 18 clubs were already through ahead of the final games while eight more teams, including Manchester United, dropped into the last 32 as third-place finishers in their Champions League groups.

A minute of silence was observed at the stadiums to honor Italian soccer great Paolo Rossi, who died after a long illness at the age of 64.

Napoli only needed a draw at home against Sociedad and went 1-0 up after Piotr Zieliński netted from the edge of the area with a right-foot shot after the visitors failed to clear a corner kick.

Sociedad looked to be going out but a cross into the area in injury time fell to Willian José, and he blasted a shot high into the net to send his team through.

Cluj goalkeeper Cristian Bălgrădean was given a red card and conceded a penalty at the start of injury time, allowing Young Boys to equalize.

Jean­ Pierre Nsame converted the spot kick — only to be sent off himself two minutes later for a reckless foul. But with Cluj throwing everything forward, substitute Gianluca Gaudino was able to net the winner in the 96th minute on a quick counterattack.

Cluj's Damjan Doković then became the third player sent off for another poor foul.

Roma remained top of Group A with 13 points despite its first defeat, 3-1, at CSKA Sofia. Young Boys was second with 10. Cluj and Sofia finished on five.

Arsenal is only in 15th place in the Premier League but was the only team to finish with a perfect six wins in the Europa League group stage.

Eddie Nketiah won the ball after putting the defense under pressure before scoring past goalkeeper Gary Rogers 12 minutes into the game. Mohamed Elneny doubled that advantage six minutes later with a fierce long-distance drive into the top corner.

Jordan Flores pulled one back for Dundalk in the first half before Joe Willock restored a two-goal advantage in the second. Substitute Folarin Balogun finished the scoring for Arsenal 10 minutes from time. Sean Hoare headed home the second for the Irish club.

Rapid Vienna needed a two-goal victory at home against Molde but the Norwegian side qualified after Magnus Wolff Eikrem scored twice in a 2-2 draw.

Arsenal won Group B with 18 points, eight more than Molde. Rapid had seven and Dundalk was pointless.

Leon Bailey scored his fourth and fifth goal of the campaign to lead Leverkusen to a 4-0 victory over Slavia Prague and top spot in Group C.

The Bundesliga side topped the standings with 15 points, three more than its Czech opponent. Hapoel Beer-Sheva beat Nice 1-0 to finish third with six.

Rangers clinched top spot in Group D with 14 points after winning 2-0 away at Poland’s Lech. Benfica settled for second after drawing 2-2 at Standard Liège.

PSV blanked Omonoia 4-0 to finish atop Group E with 12 points. Granada was held 2-2 at PAOK to sit one point behind.