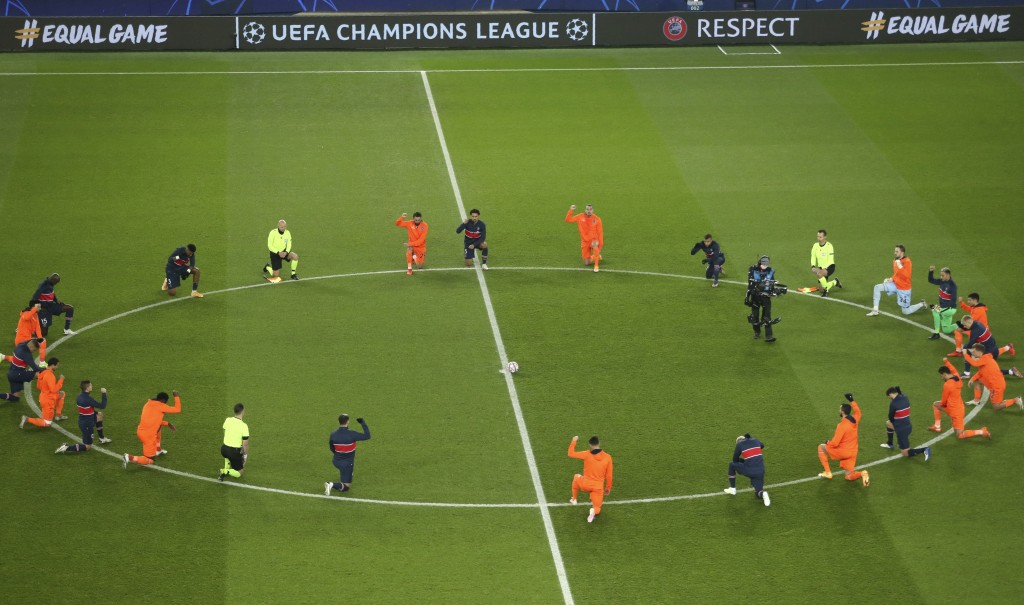 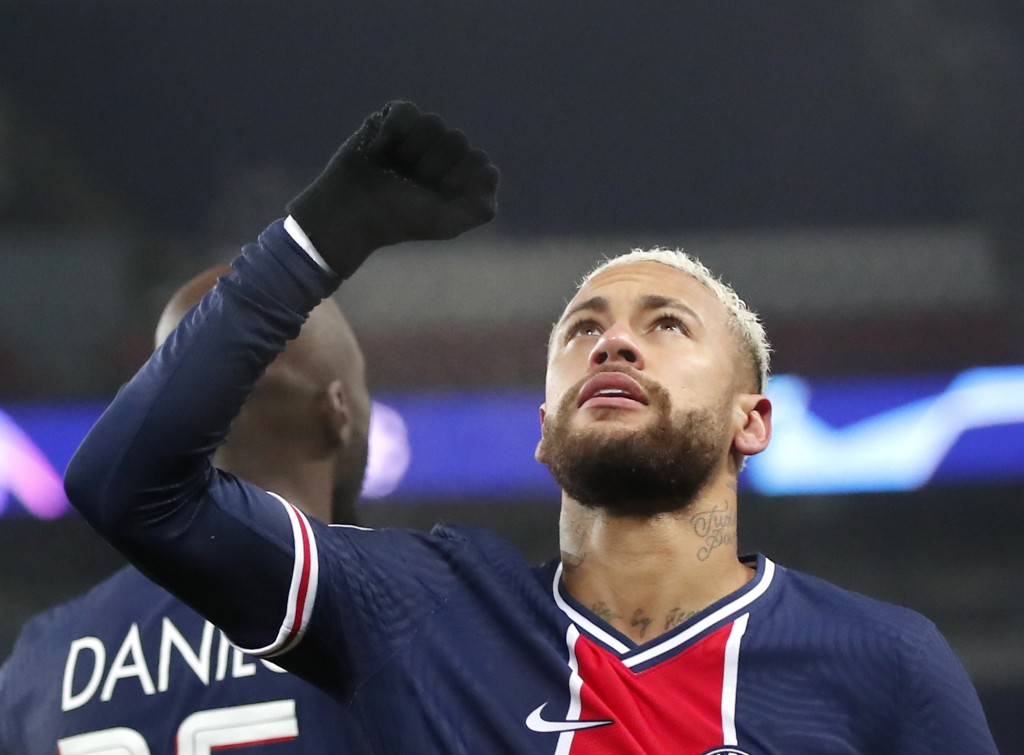 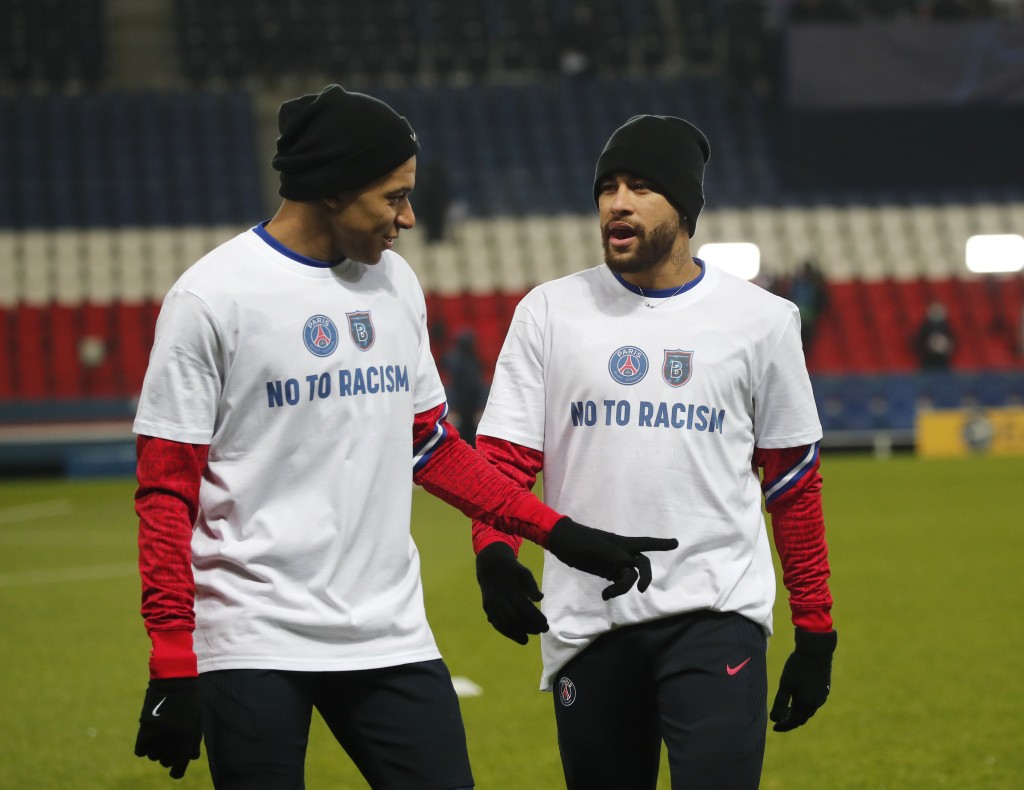 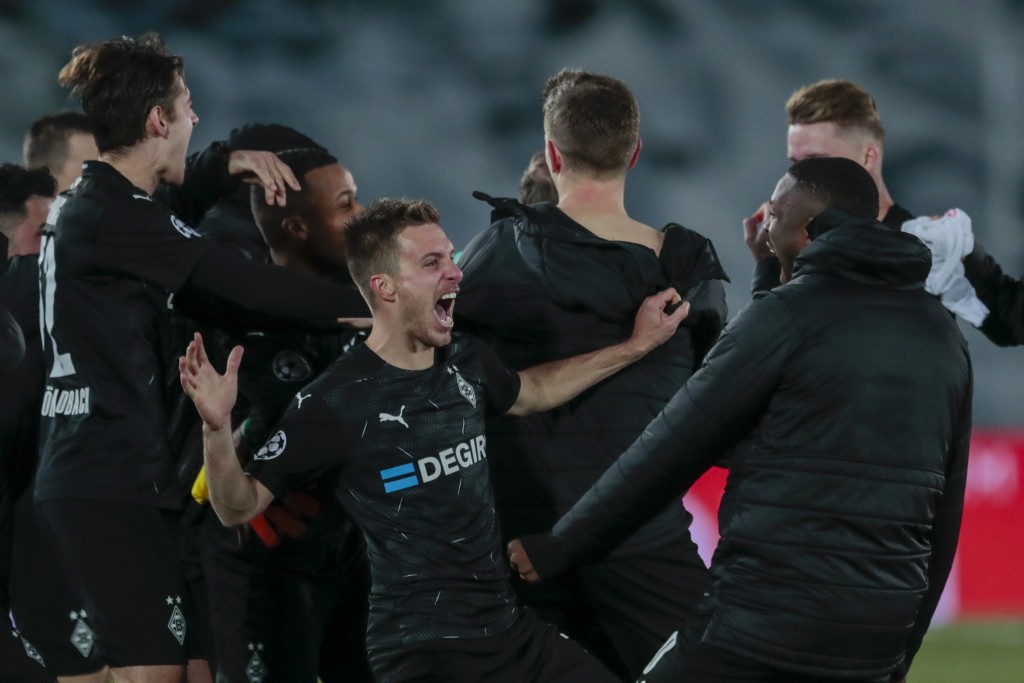 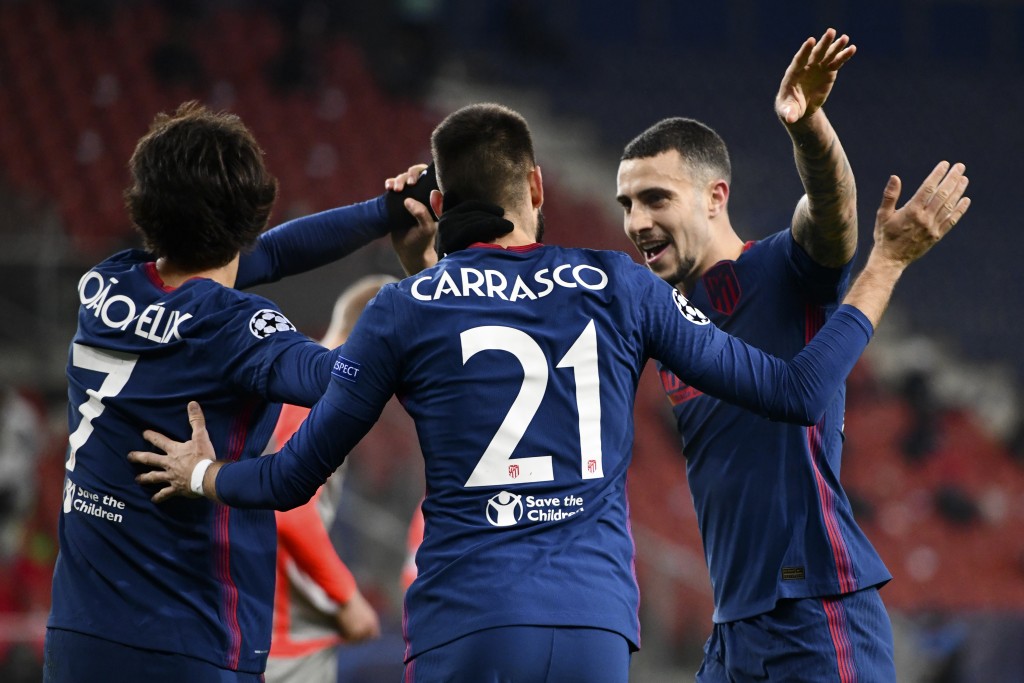 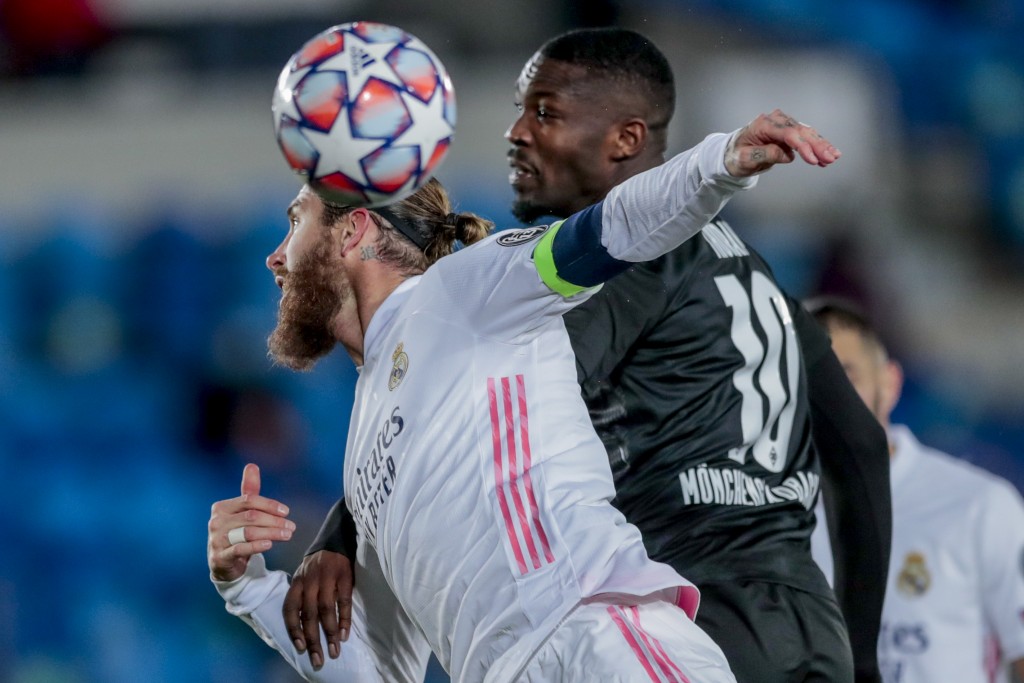 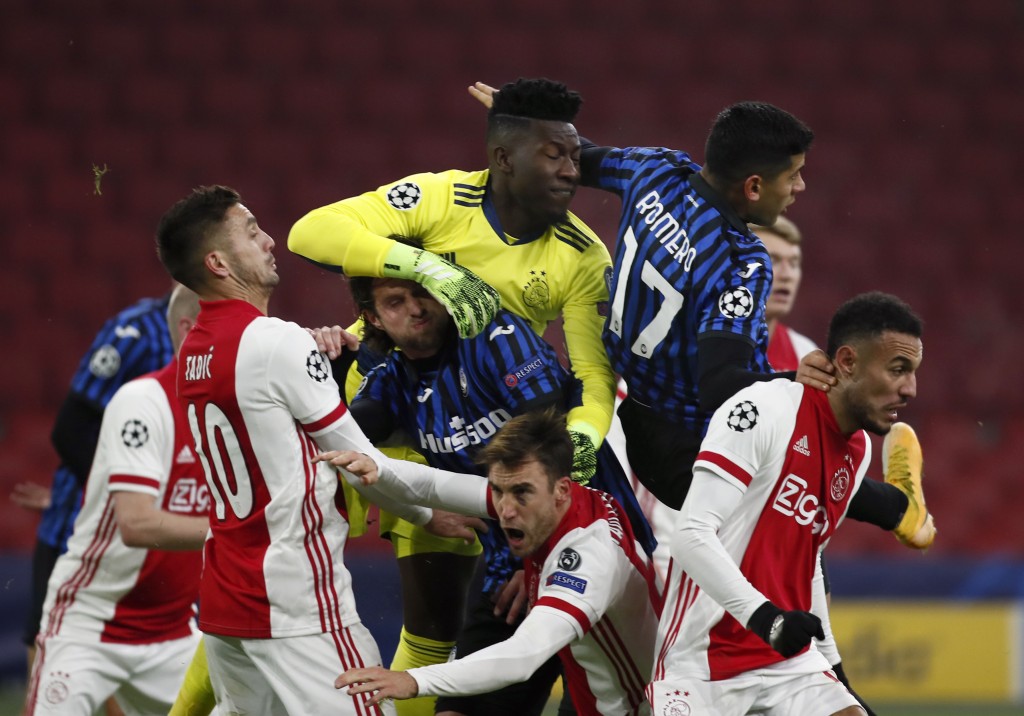 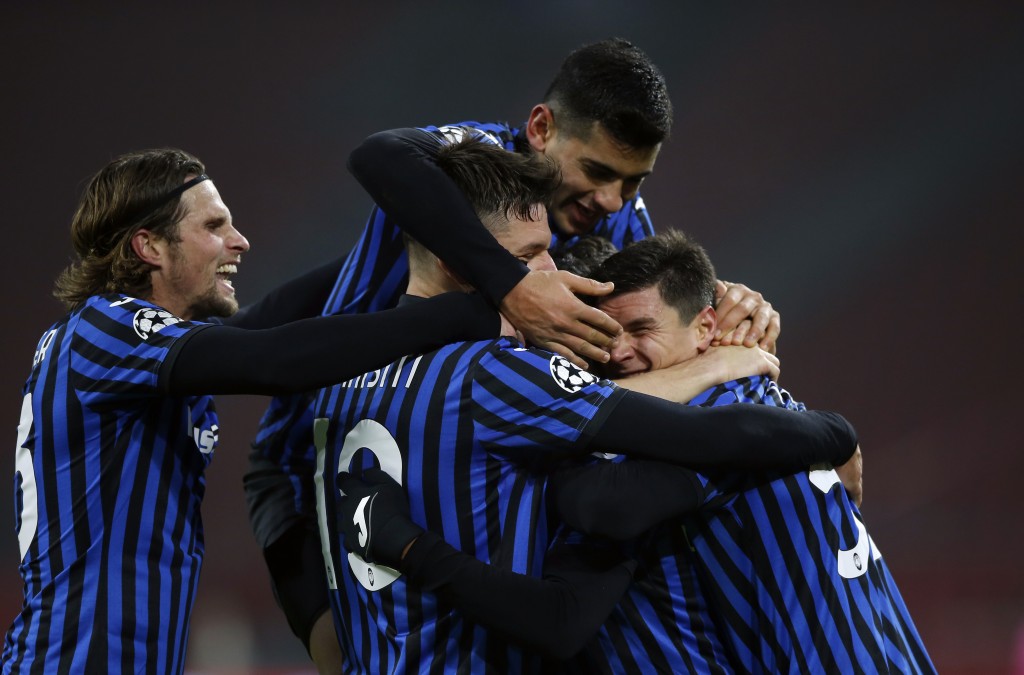 The last night of the Champions League group stage began with a display of players united against racism for a second straight evening in Paris.

It ended with business as usual for Real Madrid and Atlético Madrid, who avoided early exits to advance to the knockout rounds.

Atalanta and Borussia Mönchengladbach also claimed places in the round of 16.

There were nine games instead of the usual eight Wednesday after the remarkable events 24 hours earlier when Paris Saint-Germain’s game against İstanbul Başakşehir was suspended.

Players on both teams had refused to continue after a fourth official from Romania used a racial insult when referring to a Başakşehir assistant coach, Pierre Webo, who is Black.

They returned to Parc des Princes to resume the game in the 14th minute with replacement match officials from the Netherlands.

The new refereeing crew joined players in observing the competition anthem before kickoff by taking a knee around the center circle, while most raised a fist.

“Nothing beats actions. We’re tired of this, we never want to experience this again,” PSG striker Kylian Mbappé said.

When the game restarted, Neymar ensured PSG would finish top of Group H by scoring a hat trick in a 5-1 win. The French champion was already assured of advancing with Leipzig.

Earlier Wednesday, UEFA said it appointed a disciplinary inspector to investigate the incident. The fourth official, Sebastian Coltescu, risks a ban from games.

Ahead of a Madrid derby in the Spanish league this weekend, both teams risked going out of the Champions League.

Karim Benzema scored twice in the first half to take Madrid through for the 24th straight season as Group B winner.

Gladbach fell to second place and stayed there through a nervous few minutes after the final whistle. The team huddled around a tablet to watch the closing stages of Inter Milan’s 0-0 draw with Shakhtar Donetsk.

A goal for either team would have earned a place in the last-16. Inter finished in last place, and Shakhtar was third -- going into the Europa League round of 32 -- despite beating Madrid twice.

Atlético had to avoid defeat at Salzburg to join group winner Bayern Munich in the knockout rounds. Coach Diego Simone’s team won 2-0 with goals late in each half.

Salzburg and its American coach Jesse Marsch head to the Europa League.

Bayern won 2-0 at home to Lokomotiv Moscow to finish on a competition-best 16 points.

Manchester City matched that tally with a 3-0 win over Marseille that included a goal from Sergio Aguero on his return from injury.

Marseille finished last in the group, leaving the Europa League place to Olympiakos, which lost 2-0 at home to Porto.

Ajax and Atalanta were the feelgood stories of the past two Champions League seasons. There was room for only one of them in the knockout stages this time, and Atalanta won 1-0 in Amsterdam to join group winner Liverpool in the last 16.

Needing only a draw, Atalanta saw Ajax reduced to 10 men late on when teenage midfielder Ryan Gravenberch was sent off. The game was decided in the 85th by substitute Luis Muriel rounding goalkeeper André Onana to score.

Liverpool scored in the first minute at Midtjylland, through Mohamed Salah, but had to settle for a 1-1 draw. That gave the newcomer from Denmark just its second point and a last-place finish in Group D.

The group-stage draw made sure the four big leagues -- Spain, England, Germany, Italy --could only have a maximum 14 of its 16 teams advance to the knockout rounds.

And indeed, they have 14 teams left for the second year in a row. Last season, the European powers shut out the upstarts and long-shots by filling the last 16 with teams representing the usual suspects, plus Paris Saint-Germain and Lyon from No. 5-ranked France.

This time, the big leagues are joined by PSG and Porto, the reigning champions of the leagues currently ranked Nos. 5 and 6.

The draw is held Monday. Teams cannot be drawn against an opponent from their own country, or a team they already played in the group stage. First-leg games are played from Feb. 16-24. Second legs are March 9-17.