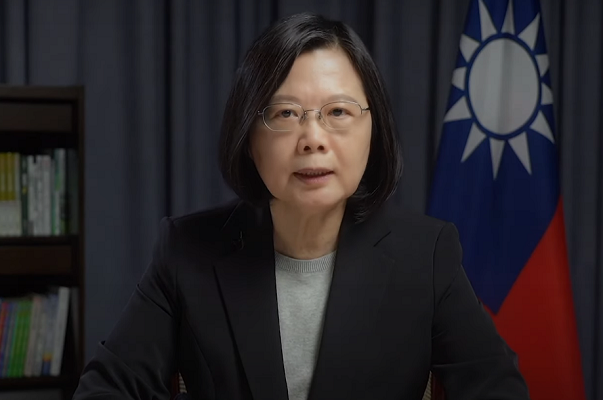 TAIPEI (Taiwan News) — President Tsai Ing-wen (蔡英文) is wooing influential think tanks affiliated with both major American parties while many in her country worry President-elect Joe Biden will prioritize soothing the U.S.' fraught relationship with China at the expense of Taiwan.

Tsai is scheduled to speak at the year-end celebration of the right-wing Hudson Institute via video-link Wednesday evening (Dec. 9) alongside Arkansas Senator Tom Cotton and Massachusetts Representative Seth Moulton.

She will also deliver remarks virtually to the Democratic Party-leaning National Democratic Institute (NDI) this week, according to Nikkei. NDI President and former Ambassador Derek Mitchell has called Taiwan a model for its approach to combatting disinformation in the digital age, and in September, the Taiwanese Ministry of the Interior greenlit the think tank's application to open a representative office in Taipei.

The pair of appearances follow her participation in a Dec. 3 virtual summit of the American Legislative Exchange Council (ALEC), which is comprised of conservative state representatives. The ALEC awarded the Taiwanese head of state its International Pioneer Award for Leadership for “her international leadership and her strong commitment to free markets.” She was the second international leader to receive the accolade, with former British Prime Minister Margaret Thatcher being the first in 2006.

ALEC CEO Lisa Nelson lauded Tsai for her support for a bilateral trade agreement (BTA) between Taiwan and the U.S., which the free market-touting organization supports, as well as for “the causes of freedom and liberty” both at home and abroad. In a pre-recorded speech, Tsai listed Taiwanese achievements such as its democratic transition, investments in innovation, and market diversification before returning to the topic of the BTA, thanking the over 200 members of Congress who have expressed support for it.

The Tsai administration announced in August that next year, the country would ease its restrictions on American pork and beef imports containing the leanness-inducing drug ractopamine. While this had the desired result of launching a high-level economic dialogue with Washington, it also opened up a line of attack from the opposition Kuomintang party, which is seeking to capitalize on public concern over the health risks of ractopamine.

Tsai's flurry of engagement with Washington's policy wonks and makers coincides with ongoing concerns in Taiwan that Biden's administration will not come down as strongly on the side of Taiwan as did Trump's.

During the latter's four years in office, the U.S. approved more arms sales to the island nation than during Obama's eight years and passed several significant pro-Taiwan bills. The U.S. also stepped up naval “freedom of navigation” operations in the Taiwan Strait, allowed two senior Cabinet members to visit Taiwan, and took the most aggressive tack in decades toward China in the areas of technology, trade, and human rights.

As a result, Taiwanese stood out in Asia because of their preference for Trump during the American elections, according to a YouGov poll. Taiwanese officials, however, have publically expressed optimism that bilateral ties will continue largely unchanged.