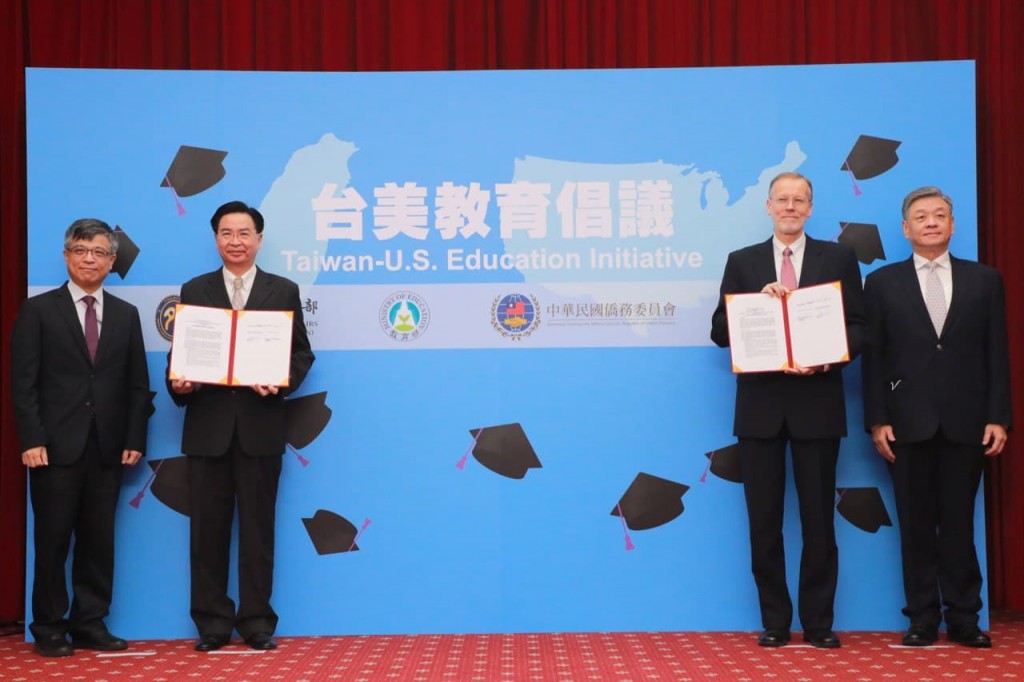 TAIPEI (Taiwan News) — Taiwan and the U.S. on Thursday (Dec. 3) unveiled an initiative to cooperate on Chinese- and English-language teaching, following concerns in the U.S. about academic exchanges with China.

Representatives from the American Institute in Taiwan’s (AIT) Washington headquarters and Taipei Economic and Cultural Representative Office (TECRO) signed a Memorandum of Understanding (MOU) on Wednesday (Dec. 2). The MOU, signed by Taiwan envoy Hsiao Bi-khim (蕭美琴) and AIT Managing Director Ingrid Larson, is intended to expand access to Chinese- and English-language instruction in both countries and promote Taiwan's role in providing Chinese-language education.

Amb. @bikhim and AIT M/D Ingrid Larson signed #MOU on International Education Cooperation on Dec. 2. Thank you, D/S Mitchell Zais of @usedgov & @ECA_AS for joining us. We look forward to strengthening our ties by encouraging new exchanges and #friendships amongst our students. pic.twitter.com/My27k6DpBM

That same day, an inaugural meeting was held virtually between Taiwanese and American officials, including Mitchell Zais, U.S. deputy secretary of education, David Stilwell, assistant secretary of state for East Asian and Pacific Affairs, and Hsu Szu-chien (徐斯儉), deputy-secretary general from Taiwan’s National Security Council. They discussed the demand for Chinese-language teachers at American universities and the Taiwan government’s goal of making Taiwan a bilingual nation, among other related topics.

The initiative comes after U.S. Secretary of State Mike Pompeo in October called on all Confucius Institutes in the country to be shut down, citing national security concerns. It also followed the termination of the U.S. Fulbright exchange program with China and Hong Kong, as a reaction to Beijing’s implementation of the National Security Law in Hong Kong.

Criticizing the Confucius Institutes, AIT Director Brent Christensen said on Thursday that Taiwan should play a key role in providing Chinese-language education for American and international students. “We are already encouraging students of the Chinese language to choose Taiwan as their place of study,” he said at the launch event in Taipei.

“We are also examining opportunities to move more U.S. government-sponsored Chinese-language programs to Taiwan,” Christensen said, adding that AIT increased its annual funding of the Taiwan Fulbright program by approximately NT$6 million (US$208,000) this year. The director stated the U.S. is eager to offer resources, as Taiwan moves to elevate English proficiency among its people.

Commenting on the launch of the initiative, Cale Brown, deputy spokesperson for the U.S. Department of State, tweeted: "Proud of our partnership with Taiwan on the U.S.-Taiwan Education Initiative! Together we can help students in the United States and around the world learn Mandarin while safeguarding academic freedom."

Proud of our partnership with Taiwan on the U.S.-Taiwan Education Initiative! Together we can help students in the United States and around the world learn Mandarin while safeguarding academic freedom. #StriveTogetherThriveTogether https://t.co/qR7vuEHXpy

Foreign Minister Joseph Wu (吳釗燮) remarked the education initiative is a starting point for a comprehensive partnership on language education. The two nations are expected to expand existing language programs for Chinese and English learning and facilitate exchanges between educational institutes, he added.