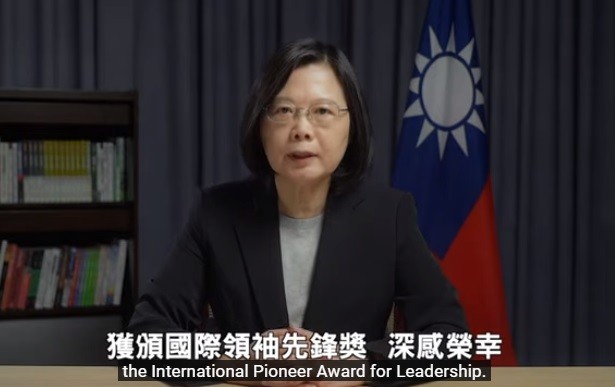 TAIPEI (Taiwan News) — President Tsai Ing-wen (蔡英文) was awarded the International Pioneer Award by the American Legislative Exchange Council (ALEC), the largest organization of state legislators in the U.S., in recognition of her leadership.

Tsai became the second international leader to have received the honor, following former British Prime Minister Margaret Thatcher in 2006. The organization also passed a resolution urging the U.S. government to start negotiating for a bilateral trade agreement (BTA) with Taiwan during its States and Nation Policy Summit, held virtually from Dec. 3-4.

“I look forward to making progress on a bilateral trade agreement with the United States, our second largest trading partner and most important security ally,” remarked Tsai via a pre-recorded video. “Such an agreement would further enhance our close economic and trade partnership, and also reinforce America’s support for Taiwan in the face of unrelenting intimidation from across the Strait.”

Quoting Thatcher, Tsai said: “When people are free to choose, they choose freedom.” “As president, my role is to preserve and defend Taiwan’s democracy, freedoms, and way of life.”

“I will never stop seeking a peaceful and stable cross-strait relationship, nor will I compromise when making decisions needed to keep Taiwan secure,” the president said. She also reiterated her administration’s commitment to improving defense capabilities, and combating disinformation and foreign malign influence operations.

“President Tsai and her colleagues have clearly demonstrated a longstanding dedication to free market principles, standing for the causes of freedom and liberty not only in Taiwan, but across the world,” said Texas State Representative Rick Miller, who also chairs the ALEC Federalism and International Relations task force.

The International Pioneer Award is presented to leaders whose careers exemplify a commitment to free market, limited government principles, according to ALEC, America's largest nonpartisan organization of state legislators. The award also honors leaders that are dedicated to serving the causes of freedom both in their own countries and abroad.

Founded in 1973, ALEC supports limited government, free markets, and federalism, and includes conservative state legislators and private sector representatives among its members. The Presidential Office noted the organization has passed resolutions in support of the Taiwan Travel Act, which was implemented in 2018, as well as the Taiwan Relations Act, which celebrated its 40th anniversary in 2019.