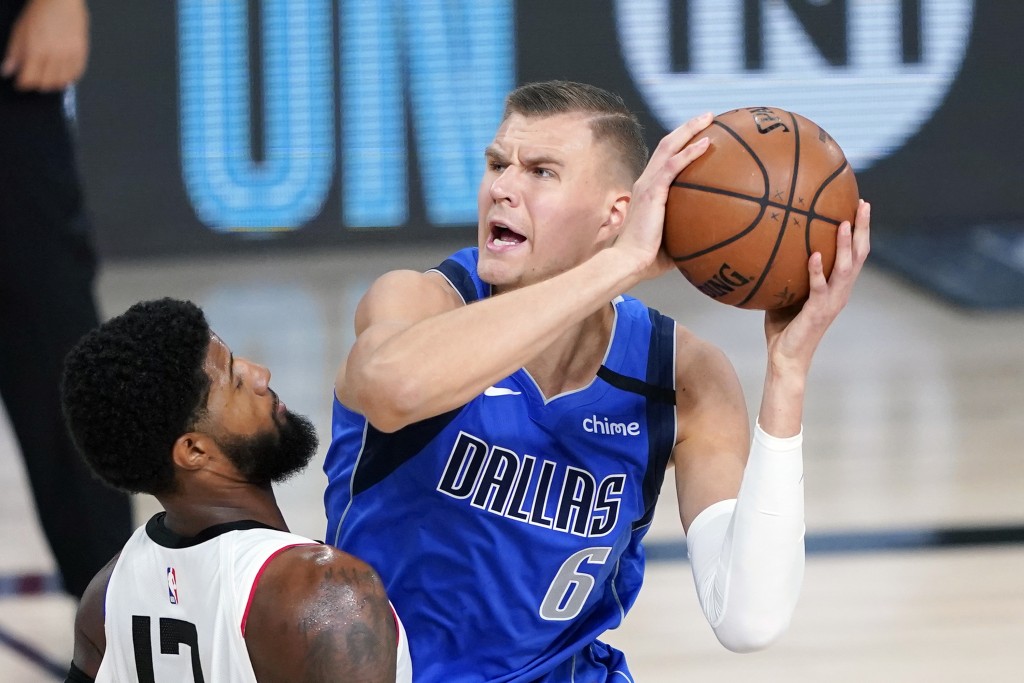 As much as Kristaps Porzingis wants to join the Dallas Mavericks for a pair of games in the national spotlight to start the season, Luka Doncic's European sidekick apparently will have to wait until the new year coming off knee surgery.

Porzingis didn't have the procedure to repair a torn meniscus in his right knee until October, more than a month after Dallas' first playoff appearance in four years ended in the first round inside the NBA bubble in Florida.

The wait was a medical thing, with doctors not certain surgery would be necessary for the 7-foot-3 Latvian who missed 20 months after tearing the ACL in his left knee in what ended up being his final game for the New York Knicks in early 2018.

The delayed surgery and the NBA's decision to start in late December apparently will sideline Porzingis the opener Dec. 23 at Phoenix, and for the marquee game on Christmas Day at the defending champion Los Angeles Lakers. Coach Rick Carlisle said the 2018 All-Star's season debut will be in January.

“I’m trying to recover that time so I can start the season as early as I can,” Porzingis said Thursday, two days after the starting of training camp. “I’m just focused on each day, making progress, getting the knee better, healthier, the leg stronger.”

Porzingis injured the right knee in his first career playoff game but played in the next two before tightness led the medical staff to keep him out of the remaining three games of a six-game loss to the Los Angeles Clippers.

For a player who sat out the entire 2018-19 season while being traded to Dallas by the Knicks in a blockbuster deal before the deadline that season, missing playoff games wasn't easy.

The recovery, however, has been a “piece of cake” compared to the ACL rehab of 2018-19, which included the Mavericks deciding not to play Porzingis the final two-plus months when he could have been cleared medically to return. Dallas was out of playoff contention by the time Porzingis arrived in a trade.

“I always say the ACL rehab felt like walking in the desert and you don’t see no end,” the 25-year-old said. “This one is just progress daily, weekly, and I can see by each day that I’m getting closer to being back on the court.”

Carlisle said the on-court work is light at the moment, while adding that the medical staff is having to hold an eager Porzingis back.

“His rehab has gone without issue. He’s on schedule,” Carlisle said. “When we get to January, we can give you a better update on where things are.”

Porzingis saw head athletic trainer Casey Smith wander by during his first virtual meeting with reporters of training camp, just as he was asked if it was easy to be patient this time after the ordeal with his left knee, or if he was nagging the medical staff just the same.

“Actually Casey just walked by. I’ll have a talk with him later,” Porzingis said with a mischievous grin. “Obviously, knowing that I’m really close or I’m getting pretty close calms you down a little bit.

“But also, in the ACL, you have to be smart. You know if you’re not ready, then it’s not smart to go out there and try to play when you’re not ready. It’s going to be the same case here.”

Porzingis finished his first playoff experience with 34 points and 13 rebounds in a 130-122 loss to the Clippers, then watched Doncic's stunning 3-pointer at the buzzer to win Game 4, followed by a 43-point loss and another 14-point defeat that eliminated Dallas.

Now that Porzingis has had surgery on both knees, and missed more time with another knee issue in his first season with the Mavericks, he isn't dwelling on whether he might be injury-prone. Porzingis leans on his belief that the two more serious injuries involved contact plays.

“After the ACL, I had no doubt in my mind that I was ready to go,” he said. “It was just a matter of finding a rhythm, finding all the little movements, the little details. Now the same thing. I’m already on the court putting in work, moving around, seeing how I feel. And that’s it. Once I’m healthy, once I’m on the court, there’s zero doubt in my mind and I just go 100% every time.”